This weekend was billed as one of the most crucial of the school rugby season, and so it proved with some massive results coming in.

The Daily Mail Trophy table has had a real shake up as some of the top sides in the competition faced off, providing some real fireworks and big headlines.

Perhaps the highlight of our ‘Focus On’ fixtures this weekend was Harrow v Wellington College, the top two in the Daily Mail Trophy. The two schools have been playing some scintillating rugby this season, but the winner here would put themselves in a very strong position to wrap up the title. A huge battle unfolded, but it was the Wellington pack that came out on top, helping to secure their side a 20-19 victory, and putting them in pole position for a third title in a row.

Brighton College further cemented their Top 10 position in the Trophy table with a brilliant 34-8 victory over John Fisher, the South Coast side are still without defeat this season and are right up there with the very best.

Back to back NatWest Cup champions Bromsgrove picked up arguably their best result of the season as they beat the outstanding Clifton College 29-27. Clifton are up there with the best, and even following defeat they still sit high in the Daily Mail Trophy table, proving just what an outstanding victory it was for Bromsgrove.

There was a second win of the week for Tonbridge, who beat Dulwich College 24-8. Their attention will now turn to their game on Friday, where they face Bedford at Allianz Park in the Champions Trophy final.

There was another strong result for Eton College as they beat one of their oldest rivals, St Paul’s, 16-5, the latest in a string of fine victories.

Millfield moved into the top 10 of the Daily Mail Trophy for the first time since the very early stages of the season after a brilliant and commanding 30-11 victory over Whitgift. Whitgift have been among the very best around this season, they are the only side to beat Wellington, but this has been a tough week, starting with a Cup defeat to Felsted, and finishing with this impressive display from Millfield.

The Rutland derby was a walkover for Oakham at Uppingham earlier this year, but in the rematch on Oakham’s Doncaster Close on Saturday was a much tighter affair as Uppingham put in one of their better displays of the season, restricting the Champions Trophy semi finalists to just a narrow 8-3 victory.

Sherborne have been in great form since the half term break, and showed that once again as they won a thrilling game against Hampton, a side who won a thriller last week against the excellent Bishop Wordsworth’s. The two sides shared fifty points on Saturday, but Sherborne took the win, 27-23.

St John’s Leatherhead have been impressive all year, but were at their dominant best on Saturday as they put KCS Wimbledon to the sword, securing a hugely impressive 67-15 victory that moves them up to twelfth in the Daily Mail Trophy, and in with a realistic shout of the Top 10 by the end of the season.

Kirkham Grammar School have even loftier ambitions, they want the title, and after a midweek win over Sedbergh, for the third year in a row, they are storming up the table. On Saturday they met another high flyer, 2013 champions, Woodhouse Grove. Kirkham shrugged off any tiredness though to secure an excellent 20-6 victory, bumping them up to fourth.

Bradford Grammar School have had a tough time of things this year but they were in brilliant form against Ashville College on Saturday, securing a brilliant 63-3 vcitory.

Friday is the focus for Bedford, with their upcoming Champions Trophy final, but they still made sure they secured the victory on Saturday as they saw off the always dangerous Northampton School for Boys by a 29-17 margin.

Bishop Wordsworth’s continued their brilliant run of form with a win over Marlborough College, it was impressive from Marlborough though as they restricted their hosts to just a 31-24 margin of victory.

Blundell’s put in one of their best performances of a highly impressive season as they saw off Plymouth College in style, 61-20. Things were closer in Bristol as St Peter’s Gloucester won their hastily arranged fixture at Bristol Grammar School, 22-17.

RGS High Wycombe were in good form to beat a strong St Benedict’s side 36-12, while King’s Macclesfield picked up a good 20-10 away win at Stonyhurst College.

There was a remarkable turnaround in Kent as Skinners’ came from 10-0 down against Chislehurst & Sidcup Grammar to secure a brilliant 58-10 victory.

Rugby School’s brilliant season, their best for a number of year, continued in superb fashion on Saturday with an excellent 23-12 win over Berkhamsted. Pangbourne College meanwhile sprung a surprise against Seaford College, securing an 8-7 victory.

Langley Park secured a stunning victory as they beat NatWest Cup quarter finalists Judd 28-22, King’s Canterbury meanwhile found some form with a 22-8 victory over Worth.

Kingswood recorded one of the most impressive results of the entire weekend as they saw off King’s College Taunton in style, 65-0. Abingdon meanwhile were playing well once again, beating RGS Guildford 29-10.

There were two massive games on Friday, perhaps most impressive was Merchant Taylors’, who for the second Friday in a row secured a huge victory, beating Haberdashers’ 47-0 at Saracens’ Allianz Park.

Denstone College were also in fine form as they beat St Joseph’s College my a commanding 30-15 margin, sending them into their biggest game of the season next week, against Ellesmere College, full of confidence.

If you have any photos, videos, or reports from the weekend’s school rugby, please do send them in via email (writers@fifteenrugby.com ), Facebook (www.facebook.com/FifteenRugby ), or via Twitter (@FifteenRugbyXV). 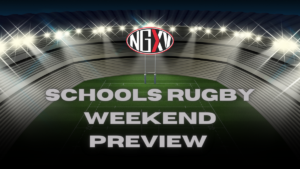