Varsity Cup: XV of the First Round 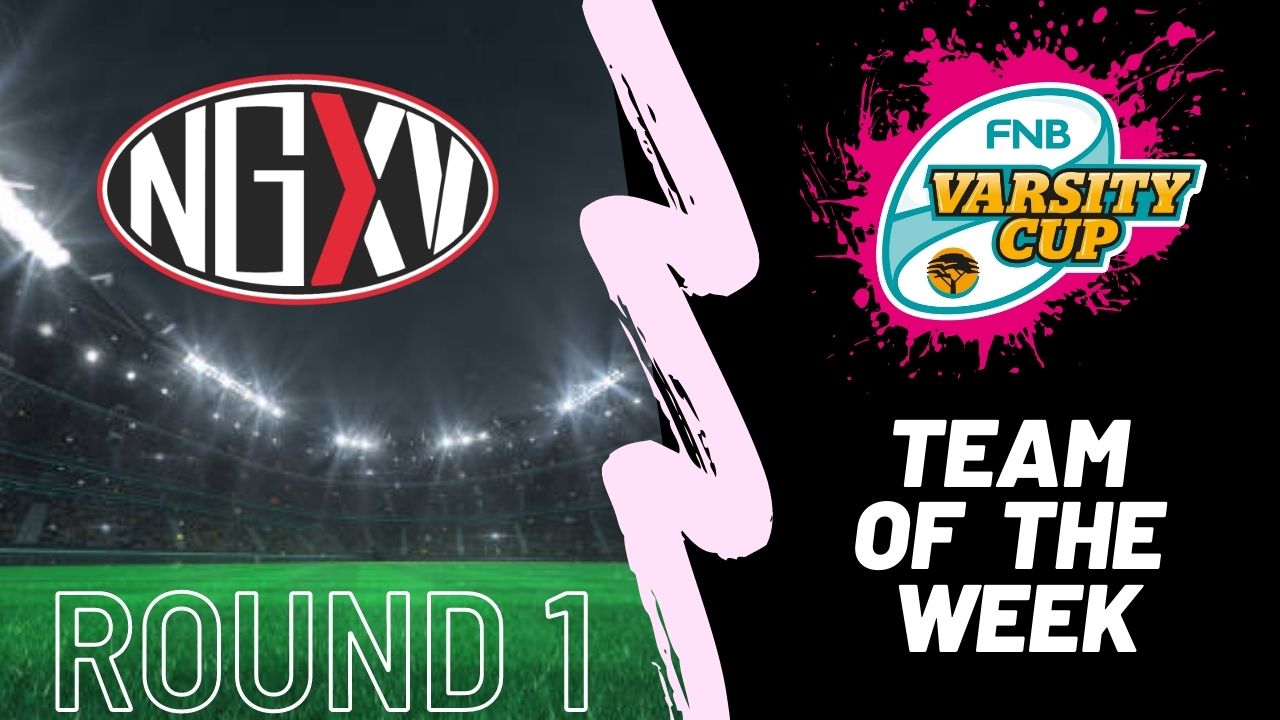 The first round of the FNB Varsity Cup is done and dusted and rugby that rocks has certainly delivered. Winning and losing streaks were ended, players who have gone under the radar finally had the chance to announce themselves and at the risk of sounding a bit cliché – rugby was the true winner on the day.

Despite there being no crowds the atmosphere was electric, helped in large part thanks to Fudge and Anton Taylor in the commentary box – you could literally hear how happy these chaps were to have community rugby back and who wouldn’t be?

Our team for the first round of the tournament is as follows:

Where did this guy come from? Blink and you missed him, such was Philander’s pace! The flyer is everything that is great about the Varsity Cup as a competition, hailing from a smaller school and playing for a what is respectfully a smaller university rugby program he was a natural from start to finish and his opposition were left scratching their heads at how to contain him.

It was not only his searing pace that was a sight to behold, his ability to spot the gap, offload and put his comrades into space was clearly something special and although it is early days in terms of the program one feels Philander is going to be a name we will be hearing a lot more in the future.

It was clear that the goal was to bombard the Wits back 3 with high balls and have players like Coetzee compete in the air, I would think few would have expected it to be as effective as it was and it played a massive part in the Tuks victory over who we thought were more fancied opponents.

Shayne Bolton must be the most underrated youth centre in the country right now, having watched him in last years Under 21 competition the former Eldoraigne pupil never has a bad game. Bolton has deceptive pace, an uncanny ability to carve open defenses and speaking of defensive when was the last time you saw his line being breached? Shimlas were expected to win comfortably against the UWC and certainly it was not their best day at the office but Bolton was immense as he always is. It is truly a head scratcher why the larger Unions have not snatched him up.

Conan has long been known to be a special talent, every since his days at Glenwood he operated on another level compared to his peers and was instrumental in his sides victory of the Madibaz in what was a hard fought encounter. His off the ball movement and ability to find himself in the right place at the right time is no coincidence, the mans rugby brain is something special.

Yes UJ did not play up to the standards we expected of them and yes this is a controversial pick but hear us out. In a team that will acknowledge themselves that they were well below par does Prince’s performance not stand out? Every time the young wing got the ball he looked dangerous, he looked confident and he looked like he could make something happen out of nothing.

UJ’s tactic of bashing the line with forwards who were being dominated was clearly not working, Prince took matters into his own hands and showed the forwards how it needs to be done dotting down for his tournament opener. If that was not enough he almost scored an epic try but had a bit of a slip up that was when looking back not that serious in the context of the game. Prince has the X-Factor, he will be a player that should he be fed quality ball will make a massive impact on the tournament. For me, he was immense in a game he where was sadly let down by his teammates.

Every army needs its general and Tedder was the Maximus to UCT’s legion who defied all odds beating Maties for the first time in 6 encounters and ending their 20+ match unbeaten run. He absolutely bossed the game with tactical kicking that was beyond his years and did not mind getting stuck in when it came to the physical side of the game, in our season preview we mentioned it may be a year too early for Ikeys but based on the performance of the team on the night we need to head over to the nearest BP and order some of that humble pie. Tedder has set the bar extremely high in his opening game, if he continues this kind of form expect a few of the Unions to start knocking on his door.

Not many scrumhalves put their hands up during the first round with Mulder being the exception. His distribution and ability to recycle the ball swayed the momentum in the game, and his tactical kicking was immense to say the very least. Mulder does the small things right and does them consistently, all too often players are about creating a highlight reel worthy moment and think of themselves, Mulder plays according to a system and is a vital link in the chain of command. A special player that will continue to fly under the radar somewhat but one we expect to make the step up very soon.

The premier number 8 in the competition so far no doubt Stehlik was immense from start to finish putting in a workman like effort and him along with his loose forward partners absolutely hammered the Maties team into submission, something we have not seen for many years. Like Tedder he has set the bar very high and if he continues with this run of form he would certainly be most pundits first name on a team of the tournament shortlist.

Sirgel is an immense player, someone who plays with his heart on his sleeve and a player you can see lives and breathes Tuks rugby. An alumni of Grens in East London his path to the top of the Varsity Cup pyramid was never an easy one but that is perhaps what makes Sirgel the player he is. A massive future awaits him one feels, and someone we will be watching closely not only in this tournament but in the future as well.

While Tedder may have won the plaudits with a truly outstanding performance it was unsung hero Liam Greenhalgh that had an equally important role to play in the game. The Ikeys pack looked up against it at the start of the game with Maties making it look easy, Greenhalgh marshalled the troops and led from the front. The hits, the workrate and his ability at the breakdown caused all sorts of problems for the Stellenbosch outfit. To play at that intensity for an entire tournament will be hard to do, but one feels that if any player can do it Greenhalgh can.

Meyer’s performance certainly wasn’t hard on the eye, the lock was all over the field on play and was a general at lineout time and contributed nicely in open play with a few storming runs and offloads to boot. The former Monnas talent is one of many young players that put their hands up in this first round and despite having plenty of competition at Tuks showed exactly what he is a starter.

Shimlas as mentioned were far from their best but if any player in the forward pack really put his hand up it was no doubt Pierre Uys the former Oakdale Landbou pupil.

His work rate was something else, he was literally all over the field of play and made some telling contributions in the game. Extremely agile for a player of his size and with immense physical power he was rewarded with 2 tries during the game, a feat not accomplished by many locks!

If you were interested in shopping for a prop we would highly recommend you travel to the Free State, the province produces the best in the business. Is it the meat? Is there something in the water? We like to think of it as something along the lines of the old school work ethic that exists amongst the communities in the Free State, Janu Botha is from a long line of powerful props and on paper was up against it when facing a UJ team that had numerous provincially contracted players.

Players like Botha don’t care about titles, they don’t care where you come from or where you have been because once you get down and dirty in a scrum all of that melts away and then it is just you and your opponent. He personified the grit and determination of the CUT pack who never took a single step back during the game, we are certainly among many when we tip our hat to arguably the performance of the tournament thus far.

Du Rand looks like the real deal, the hooker was all over the field of play and was deservedly named the player that rocks. The Pukke didn’t have it all their own way during the game with the score line flattering them somewhat but if there was a player who did seem to have it his own way it was Gustav du Rant. Everything from his lineout throwing to his defense, breakdown work and carrying was on point and is someone we certainly think will have a memorable tournament should this form continue.

It says a lot about Maties performance when only one member of their team has been named in this XV of the round but at the same time it says a lot about Bleuler’s performance as well. In the first half and when looking at the early exchanges it looked for all money that it was going to be yet another Maties victory.

The foundation for this was laid at the front with Dian Bleuler showing exactly why he is rated as one of the finest young props in the country, he was dominant in the scrum exchanges and motivated his team mates to power through. When he came off the field it is no coincidence that the wheels came off.

A lot of work awaits Maties if they are to win this years tournament as is expected of such an exceptional program but in Bleuler they have a player who can lead the charge from the front.