Varsity Cup: Team of Round 3 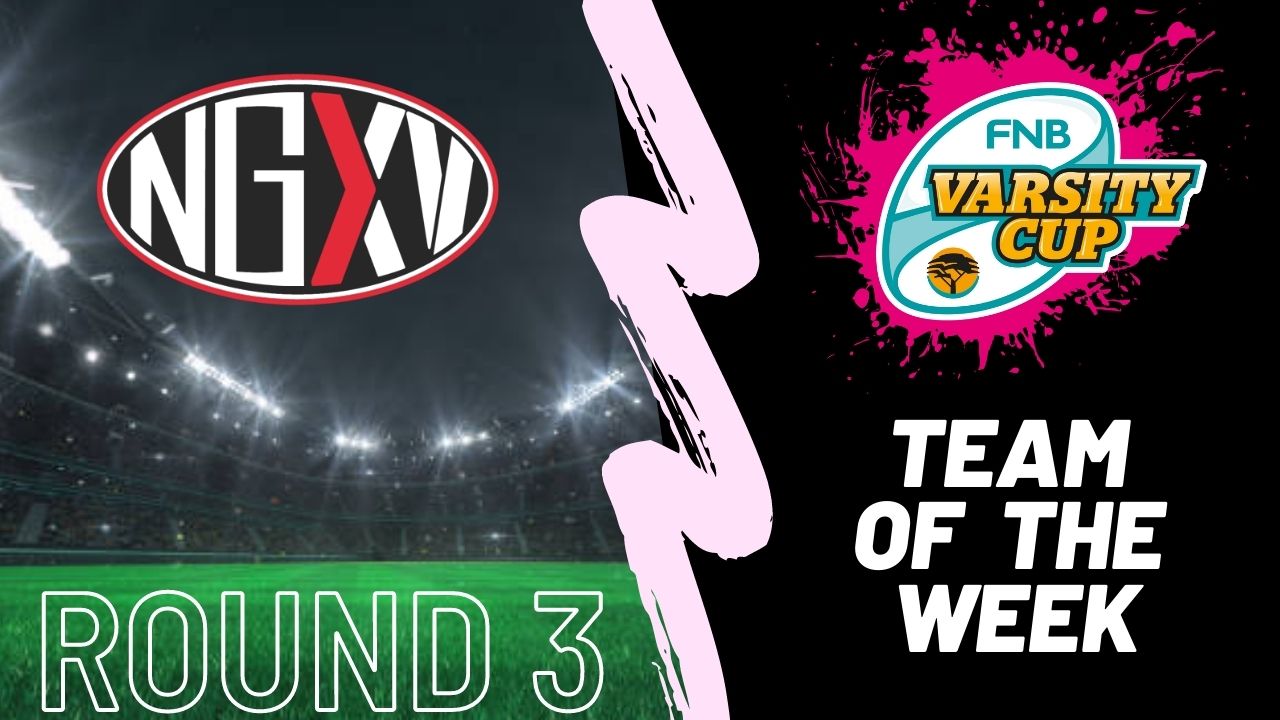 Another great round of rugby and herewith our team of the third round of the FNB Varsity Cup.

At last! I can hear many of you uttering those words now and fair enough, Jaspar has been simply immense throughout the competition and was our runner up in both round 1 and round 2 missing out on two players who won the prestigious “player that rocks” award. Jaspar gets his place in the team this week and few will argue against the fact that he is the form fullback in the competition along with Zander du Plessis from Tuks.

It’s a bird, it’s a plane, no its MUNIER! Did you see that bit of work in the air? You could hear thousands of beers drop in disbelief, it was a thing of beauty and Munier is certainly a player that is in red hot form and long may it continue. Seeing Hartzenberg in full flight is a sight to behold, he is an all star threat and will be a vital part of the Maroon Machine’s march toward what they hope is yet another varsity cup trophy.

To say that Wits have been frustrating to watch is an understatement, a team that has so much potential and showing glimpses of brilliance but not being able to finish anything off makes one want to tear their hair out, but Henco van Wyk has been a shining light and his brace was well deserved. A truly gifted playmaker one hopes that the team can do more to get the quality out of their stars especially young talents such as Henco and Ngia Selengbe.

And we just so happened to release a rugby tribute to Henco on the same day as he scored his brace, perhaps NextGenXV is Henco’s good luck charm?

Van der Schyff has been immense throughout the tournament, a tank of a man especially for a centre he has an uncanny ability to always get over the advantage line. Of course his size and strength do his cause no harm but unlike other big man centres he has a skillset that complements his size making him what we feel is an all star threat. Expect big things from this young talent in the future.

Yes wings are expected to be top of the trying scoring charts and while Louw is not, the dynamic of rugby has changed so much that one almost expects the hookers to cross the whitewash more than the outside backs which adds a whole new dynamic. To us Louw was simply immense during this round, his work in the air was astounding and his link play and unselfish nature mean that in what will likely be the new normal in rugby he is a player whose star will continue to shine bright.

Williams has just been begging to have his name added to the list, were it not for two incredible performances by James Tedder he would almost have certainly had his chance but this week is Williams’ week. One cannot underestimate the importance of having a reliable and high rugby IQ pivot, their ability to control the tempo of the game and give their team confidence has seen more established teams struggle while CUT’s star is on the rise. Hopefully he can keep it going!

So Lewis did indeed not spent the whole match at scrumhalf we concede, but at the same time one feels that his name has to be on this list as he had a big round, a big round that he has been threatening to have for some time. The tussle between him and Mulder for the scrummie birth is a huge conundrum for coach Luus, but one feels in a tournament such as this where so much rugby is being played that it is an enviable position to be in.

I thought Schutte has been outstanding for UJ throughout this tournament and was immense in their unlucky loss to Ikeys. The former Monnas pupil has been excellent in the carry and put in the hard yards despite the team under performing compared to expectations.

What an absolute workhorse! If there was a player that was all over the field throughout the game and playing with his heart on his sleeve it was Mabuza. Just 2 years ago he was the forward that rocks for UKZN in the varsity shield and “El Matador” surely has made the Unions take notice of his great talent. Love watching this youngster player and hope he continues with this form, his hard work is certainly paying off.

It this were not a rugby game Mavesere would likely be wanted in connection with a vicious assault! There are hand offs and there are whatever he did! Driller as he is known is a young Zimbabwean talent who is highly rated in the UWC ranks and he showcased exactly why. Keep a close eye on him for more during the tournament.

UCT truly are blessed in the lock department, they have exceptional depth and Connor Evans was within a whisker of being named in our team of the round 2, but this week the plaudits go to Bowes and for good reason. UCT were dominant in their first two fixtures but UJ came out guns blazing and it was going to be a titanic battle with the forwards. Personally we felt that UJ had the upper hand but Bowes was a player in the UCT team who did not take a single step back and made some fantastic tackles, was great at the breakdown and perhaps most impressive were his carries.

Lunga is criminally underrated, he always has been. He was a member of the Green Machines unbeaten side of 2018 and was a vital cog within that wheel, the team were the only school to stop the Grey Bloem juggernaut from having a 100% 2018 season and although many of the flashier players got the plaudits Ncube was an absolute titan. Fast forward a few years and the player has been transferred to another province and has a fresh start awaiting him. He didn’t start the first game, was a starter in the second and with his third start the UJ tight 5 looked more cohesive as a unit and certainly had the upper hand against the Ikeys, to say Lunga didn’t have a massive part to play in that is bordering on lunacy.

So lets clear some things up here! No Janu does not have any evidence on us that could land us in jail, nor are any of us dating any relative and no member of the Botha family have threatened us in any manner! Good now that is out of the way lets be serious for a second! How could we not name Botha in our dream team? Honestly the guy was an absolute monster AGAIN!! He completely bossed his opponent in the scrum, won his team numerous penalties and made the Shimlas want to avoid any situation where a scrum would be called. Believe us, we want to be in a situation where we can choose someone else at tighthead for just one week, maybe the CUT coaching staff should give the big man a rest for a round so someone else can have a chance! He truly is an unreal talent, his game has been on point during this tournament and he could be one of those props a la Willie Meyer who developed later in the careers and had a fantastic pro career, who knows at this stage?

Osuagwu has been a player that has been hyped up, even before the tournament started many felt he was one of the players to watch.

Don’t think it’s a coincidence that the UJ forwards have become more dominant as the rounds have continued, Osuagwu is one of the most highly rated hookers in the competition and there is good reason for that, and the scary part if we believe he has only just started.

Who would have seen this coming? Not that Kiewit is a bad player, he wouldn’t be on this list and wouldn’t be playing if he was – what shocked us the most this round was their dominance in the scrum against an Ikeys team that took it to Maties in no uncertain terms. Had the UJ backline been able to fire on all cylinders it would have been a very different game one feels, but the UJ tight 5 showed that they as a unit are capable of taking on all comers. Kiewit is a unit! That much is know, but today he proved that he is so much more than a one trick pony and one has the feeling that again should the backline get their house in order the UJ forwards can lay the foundations for the team to make an epic comeback during this tournament.