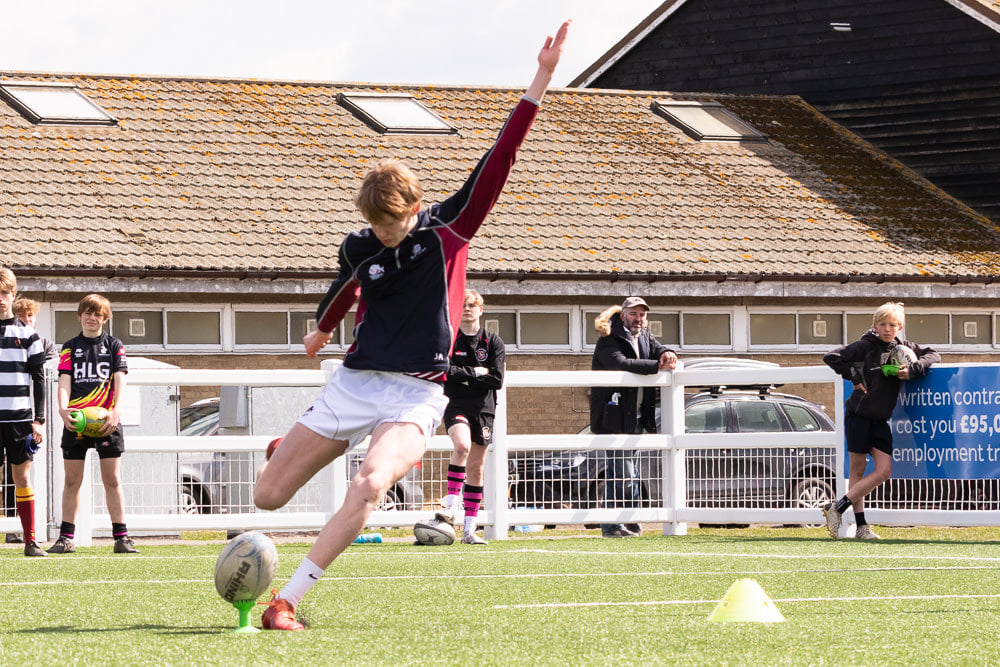 The second regional event of the 2021 Alred Trophy took place at Oxford Harlequins RFC on Tuesday, with the next five kickers confirmed for July’s Alred Trophy Finals.

On Tuesday the Alred Trophy moved on to Oxford for the South East event at it was Eastbourne College’s Jack Greig that claimed the title, bettering even Leaver’s outstanding effort the week before with a stunning 9 of 9 in the main goalkicking event.

Greig will be joined at the finals in Nottingham this July by New Hall’s Will Coleman, Saint Cecilias’ Maximus Winter, Trinity School’s Lucas Friday, and Peter Symonds’ College’s Joseph Walsh.

Walsh was in fine kicking form throughout the day, the Club Trojans youngster winning the Drop Zone challenge with a perfect three from free, and also making the longest kick of the day, 50 metres.

The other challenges saw a number of high class performances, Ranelagh School’s Tom Hamble won the Longest Drive with an average of 44.4 metres and an aggregate distance of 222 metres, Thomas Groves of Merchant Taylors’ Northwood pushed him hard though, nailing a 49 metre kick.

In the Target Restarts challenge it was Salesian College’s Mark Fensome that was the class of the field, landing four out of six on the target zone. Meanwhile in the Downtown challenge, Westminster College’s Joe Slater was rampant, with a 49 metre kick, the longest personal kick, an average of 48.3 metres, the best of the day, and an aggregate distance of 145 metres, the best of the day.

The story of the day, though, was surely that of Bloxham’s School’s Noah Cloete. At just 13 years of age he was one of the youngest in the competition, yet showed his kicking pedigree and his calm nerve to win the Hang Time challenge, landing four out of five on target for a total score of 70.5 seconds of hang time.

For Greig, Coleman, Winter, Friday, and Walsh, the next target will be July’s finals in Nottingham, where they will be among those kicking to become the Alred Trophy winners, and we will be live streaming that final for you here at NextGenXV. Along with the Trophy, the winner will receive a 12 month scholarship to The Kicker’s Club, as well as plenty of freebies from Alred Trophy partners.

Mentoring at The Kickers’ Club will come from some of the best kicking coaches in the world, including the legendary Dave Alred, after whom the Alred Trophy is named, who coached the likes of Jonny Wilkinson, Beauden Barrett, James O’Connor, Stuart Barnes, Jon Webb, Matt Burke, Morne Steyn, Rob Andrew, Jonny Sexton, and George Ford, in a career that has seen him involved in World Cup triumphs, Lions Tours, and even an NFL stint.

Before all of that, though, there are still another four regional competitions to go, plus the girls competition and all can still be entered by heading to www.schoolofkicking.com

222 metre aggregate – best of the day

49 metres – longest of the day

Scotland U20: Six to Watch
England U20: Revealed, the Top 10 England U20 International Producing Schools
error: Content is protected !!
Skip to toolbar