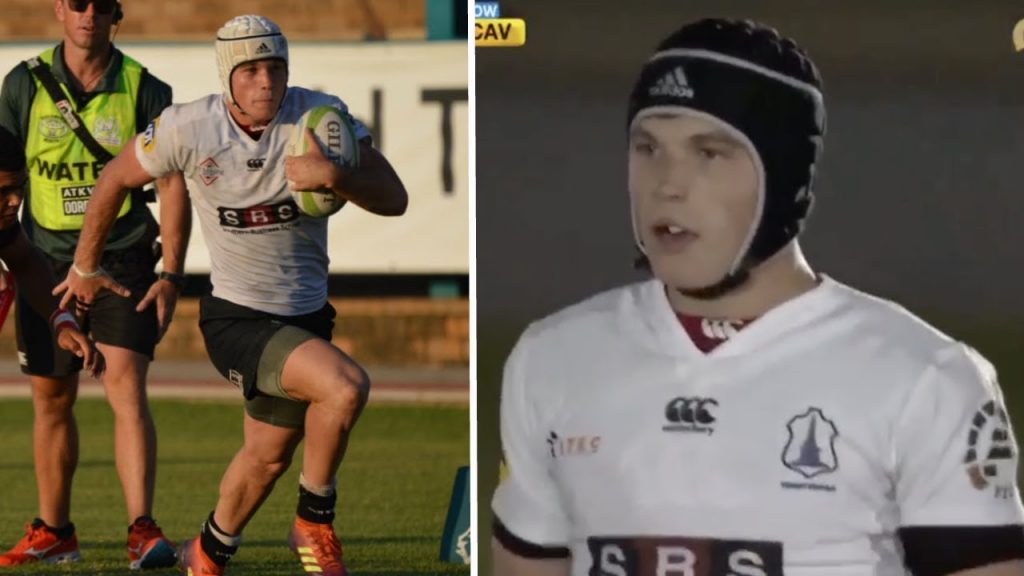 Henco van Wyk is what many have called a generational talent and it is certainly hard to disagree.

Monument have a habit of producing exceptional centres, when one looks back the names Jaque Fourie and Brendan Venter stand out. Players who play the game firmly but fairly and whose natural instinct for the game make them stand out in what is a crowded field.

Henco graciously took the time out to do an interview with us to give an insight into what has made this young talent tick.

Henco, thank you for joining us today. Can you give us an idea of your earliest rugby memories?

It would have to be playing rugby with my brothers, we would play every Sunday afternoon and it was competitive as you would expect between brothers. I did not know it at the time, but it would play a huge part in my development as a player.

Who so far has been the biggest influence on your career?

Without a doubt it has been my family. I have had unconditional support from them since day one, without their support I would have never achieved what I have.

Have you always been a centre? If not what other positions have you played?

In primary school I was actually a scrumhalf, it was only when I started playing high school rugby that a coach suggested I make the move to centre. I haven’t looked back since.

What impact did the global pandemic have on your career last year?

It caused a huge disruption for me personally but I know it had a devastating effect on many young sportsmen. Without any game time it was difficult to keep motivated and focused, I felt that my sharpness had declined somewhat and of course training is not nearly as effective as time on the field in terms of ones development. Although it had an effect one should always remember that people have passed away from this virus and many lives have been devastated, rugby is important to me but when one looks at the global impact it puts everything into perspective.

What are your personal goals for 2021?

My major goal this year was to become a Junior Bok. Having played SA Schools in 2019 I know how talented our age group is, there really is some outstanding talent in our rugby and I believe we could have bought home the trophy this year. Further to that I would like to play regularly for the Lions under 20 team and hopefully prove myself enough there to be given a chance to showcase my ability for the Lions at senior level. Of course it goes without saying that I plan to give my all for every team I represent.

There was certainly interest from overseas clubs but I knew in my heart that South Africa is where I wanted to be. It is my dream to play for the Springboks and it always will be, it is my personal belief that I have the best chance of wearing the green and gold one day by staying in South Africa and progressing through the local ranks. Money is not what motivates me, creating a legacy and representing my country are what means the most.

You signed for the Lions, have you always been a Lions supporter?

I must confess my family and I were Blue Bulls supporters from when I was young, but of course as soon as I put pen to paper I became a Lions fan and my family have as well.

Who was your hero growing up and who do you model your gameplay on?

My hero was Pierre Spies, he was just a phenomenal athlete and the way he conducted himself both on and off the field of play was nothing short of inspirational. The player I modelled my game on was Irish legend Brian O’Driscoll, I spent hours watching his reels and when playing with my brothers on Sundays would often execute what I learnt from him.

What was your favourite school rugby memory?

We had some fantastic wins as a school, we had a great team spirit and the coaching team were supportive of me from day one. It is hard to think of an on the field moment but if there is one thing I can never forget it was the feeling of putting on the Monnas jersey for the first time, it was the end product of years of hard work and it was an honour for me to finally wear the jersey that so many great players before me had worn. Another memory of course is making the SA Schools team, wearing your countries colours and singing your national anthem is something you cannot describe.

What are your long term ambitions as a player?

Everything I do, every sacrifice I have made and every rep at the gym and meter ran is about one thing – it is about wearing the Springbok jersey. I knew from a young age that this was my dream and I would do anything I could to achieve that dream.

My last ever meal would be: Pizza

If I could meet one person on earth it would be: Brian O’Driscoll

My favourite music is: a mixture of Afrikaans, country and 80s/90s music

If I was not pursuing a career in rugby I would: be farming with cattle

A position I would never want to play: prop

PrevPreviousSchools Rugby: Another fantastic week of action across England
NextStepping Up: Focus on the U21 players in Round 18 of the Gallagher PremiershipNext