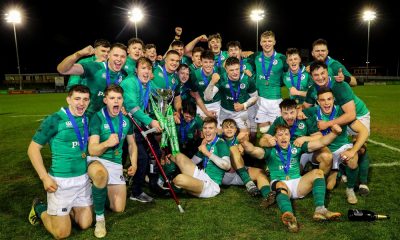 The 2021 U20 Six Nations will take place this June after the fixture dates and venues were today confirmed by the Six Nations.

All games will take place at the Cardiff Arms park in Wales between the 19th June and 13th July, with three back to back games on each of the five game days, which are Saturday 19th June, Friday 25th June, Thursday 1st July, Wednesday 7th July, and Tuesday 13th July.

Given the truncated nature of the tournament, matchday squads will consist of 26 players rather than the usual 23, while the whole tournament being held in one venue is aimed at reducing the risk around travel and creating the longest possible rest periods.

The tournament will kick off with Scotland v Ireland at 2pm on Saturday 19th June, Scotland taking on an Ireland side that was on course for back to back Grand Slams before the 2020 tournament was cancelled due to Covid. They had won the Grand Slam in 2019 and had secured a Triple Crown in 2020 before the pandemic struck. Scotland, meanwhile, actually did manage to play all five games, beating Italy and Wales, the only other side to play all five of their games.

Up next on that opening weekend will be England v France at 5pm. Each had won two and lost two when the tournament came to a halt last year, England beating France in the corresponding fixture 29-24.

Roundup off that opening weekend is Italy v Wales at 8pm, the two sat in the bottom two places of the table when things were called off, though the promising young Italian side had only played three games.

All fifteen games are set to be broadcast across the Six Nations territories, be that on terrestrial TV, streaming platforms, or the Six Nations digital channels, though details of which games will be on which platforms is yet to emerge.

Round 2 sees England at Scotland kick things off before Italy take on France and Wales play Ireland, then in Round 3 it is again Scotland to kick things off, playing Italy, before France face Wales, and Ireland take on England.

There has been no comment at this stage as to whether spectators are likely to be able to attend or not.

Commenting on the announcement, Six Nations CEO, Ben Morel said: “We are delighted to be in a position to play the Under-20s Championship this year, having had to cancel it in 2020 due to the pandemic.”

“The Under-20s Six Nations Championship is an important milestone in the life of many young players who will pursue a career in professional rugby and we would like to thank the unions for their hard work in making this Championship possible and our broadcasters for bringing it to the homes of rugby lovers. We are looking forward to some exciting rugby.”

WRU CEO Steve Phillips, added: “The Welsh Rugby Union is honoured to be hosting the 2021 Under 20s Six Nations Championship at the historic Cardiff Arms Park.”

“The Under 20s Six Nations Championship is a crucial pathway for the players’ development as they begin their journey into senior professional rugby. A number of players currently playing for their respective unions at the highest level have come through this programme, so it will be exciting to see the next generation of stars in action here with us in Cardiff.”