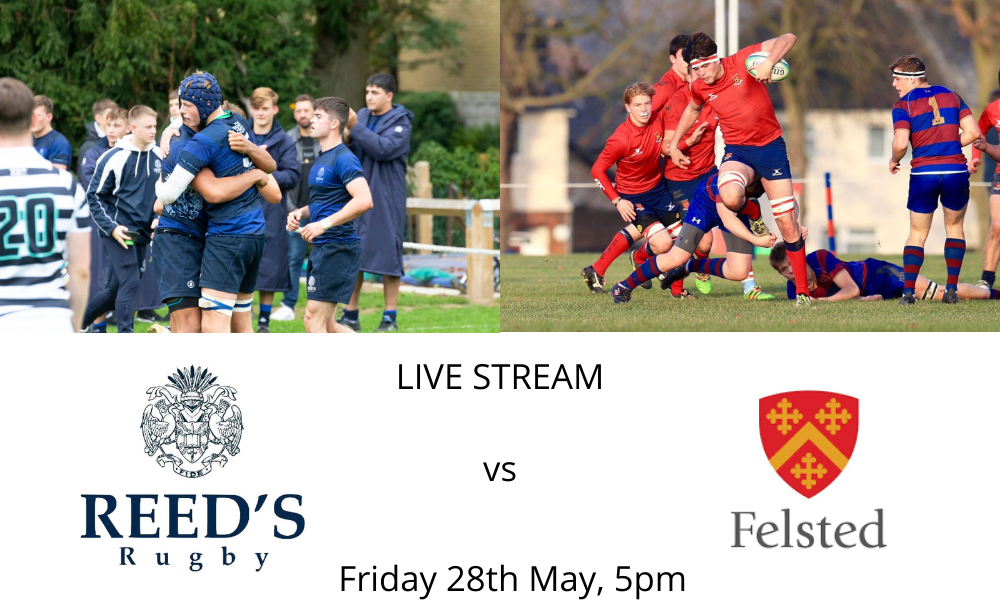 If anyone out there needed a summary of what the last four weeks of school rugby has been for, Reed’s v Felsted gave you every answer you could possibly need and more.

Felsted won the game, 26-17, and a great game it was too, but what this game was really all about was the very essence of schoolboy rugby – the game. After a year like no other, we had a game, and for those fifty or so young men that got to run out onto the field by the end, that game will mean everything. When the years tick by, this will be the game that stands out – the game that happened, that they finally got to play.

Boy did they play. Both sides showed real attacking flair and joy in their rugby as they played out this final game of the season. It was a game of mixed emotions, for those in their U6th it was a final game in a school shirt, and yet for a huge swathe of others it was a first team debut.

The home side, with a couple of prior games under their belt, came out of the blocks fast, carrying hard around the fringes. Felsted were doing great work on the floor, Cooper Baker in particular doing some phenomenal work, but Reed’s continued to impress when in position and as they caught the away side short of numbers they released Joe Sherdan down the right wing from deep inside his own half. Sherdan scorched away from the covering defence and as a superbly corner-flagging Max Tomlinson hunted him down, Sherdan managed to get airborne and get the ball down in the nick of time. Finaly Scott, who was superb all game, then stepped up with a touchline conversion for a 7-0 lead to the men in blue.

Felsted soon narrowed the gap with a Harry Clenshaw penalty, before up stepped Tom Jones for this first of a two try performance that will live long in the memory as he moves on to life with the Ealing Trailfinders and Brunel University.

Felsted, with the ball deep in their own 22, moved the ball wide with real ambition and as Jones braced to receive the ball he just arced his line to get on the outside of the on-rushing defence. Storming up to halfway he stepped the full-back before racing away and underneath the sticks. It was a sensational score, made all the more so for the situation in which it came, this unique final game of the season.

The score pushed Felsted into the lead, before the outstanding Josh Robson-Groom slotted a penalty to extend things out to 11-7 in the away side’s favour with the final play of the half.

The game started to really open up in the second half, with some bodies tiring and a raft of substitutions being made. Reed’s were handing out 9 debuts, 8 on the bench, Felsted too handing out a huge number of debuts. It was everything that this min-season is supposed to be, pride, joy, and huge fun.

A Robson-Groom penalty extended the advantage for Felsted, but Reed’s came hammering back, the dynamic Myles Billington at scrum half a real buzzing presence. Camped in Felsted territory they looked for all the world like a game levelling score would could, only for the magnificent Jones to step in for the intercept and go the length of the field for another sensational solo score. Having witnessed his explosive pace for his first, there was never any doubt that from the moment he plucked the ball out for the air he would be going the length, and allowing Robson-Groom a simple conversion for a 21-7 lead.

Still Reed’s kept competing, of course, this was their last outing and with the likes of Adam Spencer and Dylan Thomas putting in some monstrous shifts of work, they were never going to bow out of their last ever game together meekly. If there was one man that epitomised that it was Finlay Scott. The UR7s Academy man was an absolute beast, particularly in defence where he was causing havoc at almost every breakdown, but having gone two scores behind it was he that stepped up in attack this time. Taking a free kick and charging straight at the heart of the Felsted defence in the right hand corner and absolutely smashing through for what felt like a hugely important score.

Indeed it probably should have been, but for the fact that Felsted were now playing with a level of freedom and clinical play that was simply outstanding. Regathering from the kick off the immediately put the pressure on the hosts before wrapping around the corner. As the defence pressed hard, Harry Clenshaw stabbed through a squirmy grubber for the oncoming Robson-Groom to pounce on and score. It was a glorious piece of communication between two players that had been at the heart of much of what was good from Felsted.

At 26-12 though, Reed’s still refused to lie down or to stop playing with wonderful ambition. They were duly rewarded with a try through their tremendous openside Zach Washington after some delightful handling before a deft basketball offload from Charlie Hancock gave Washington the run in.

The comeback felt possible, and the rush of energy for all both on and off the pitch of a game of schools rugby that could go down to the wire was as unmistakable as ever, despite the absence of over a year. Reed’s had a chance with the clock wining down, but with a classy piece of play that summed up his afternoon, Harry Clenshaw athletically dived to keep the ball in play from a Reed’s penalty kick to touch, and with that Felsted, in their first game since 2019, sealed the spoils.

It was a tremendous game, and tremendous that we even had a game. However the moment of the match was still to come. It was seeing each side having their team photos with parents from both teams with their phones out, capturing the moment. Those are the magical moments that have been missed, the pride from the school and the parents, the pride from the players in the school, the shirt, their performance, and for their teammates. Ultimately, that moment was all that school rugby was about – capturing the sheer joy of playing and being a part of something with your mates, while your family looks on with pride.