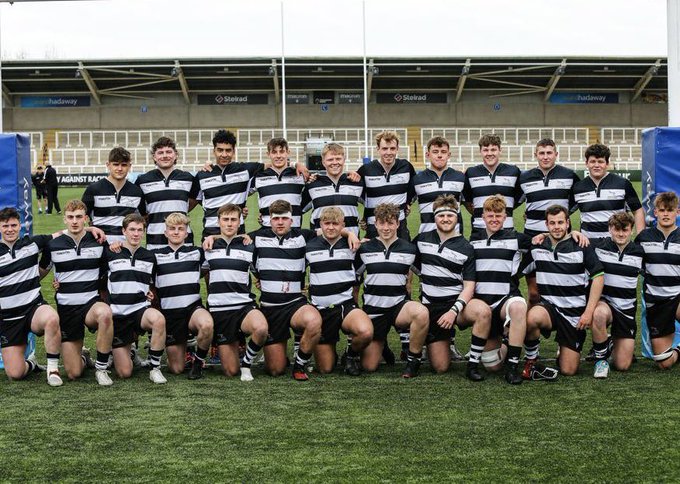 This weekend was the final round of U18 Academy League games as this most unusual of seasons came to an end.

Once again all fourteen sides were in action, but there were three in particular to keep an eye on, Exeter Chiefs, Gloucester, and Saracens, who all headed into these final games unbeaten. Exeter and Gloucester set up particularly nicely as they met at Truro College in a head to head that could decide the top dogs, depending on what happened between Harlequins and Saracens.

Of course though, the main thing was that the players were out playing. Especially so for those for whom this would be the last occasion in an academy shirt, U18 players who will not be moving on to pro contracts in the summer.

In terms of making Exeter v Gloucester a head to head for the ability to do call themselves the only unbeaten side in the competition, Harlequins did their bit with an utterly stunning display against Saracens. They were flying as they scored nine tries to secure a 57-14 victory against the previously unbeaten Saracens, the second time in a row that they had scored fifty. Conor Slevein and Cassius Cleaves both sealed braces, while Bryn Bradley, Will Hobson, Josh Tusler, Conor Oresanya, and Jonny Green all crossed the whitewash too, Jamie Benson landing six conversions.

That set up for that brilliant climax at Truro College, except that as with Harlequins v Saracens, one side was just absolutely on it from the word go as Exeter Chiefs stormed to a quite sensational 56-7 victory over Gloucester, leaving them as the only unbeaten side in the competition and therefore unofficial champions.

It was a stunning performance from the Chiefs, whom legendary fly half Gareth Steenson has been championing, but perhaps not one that should have stunned people, they have been sensational throughout this mini season, only Bristol bears have run them close.

Bristol themselves were also in cracking form on Saturday as they went u to Sixways Stadium to take on Worcester Warriors and came away with a quite brilliant 26-5 victory thanks to scores from Gabbe Lacey, JJ Williams, Tomas Gwilliam, and Ewan Skuse for what was, perhaps somewhat surprisingly given their performances, their first victory of the campaign.

Things were much closer at Hazelwood where Bath and London Irish played out arguably the game of the round. London Irish arrived without a victory to their name, Bath with only that victory over Bristol Bears behind them, but both came out flying and playing some brilliant rugby. It went right down to the wire, perhaps fittingly given why these games are even happening, but it was Bath that came away with the spoils, 26-24.

Along the road at Aylesbury RFC there was another cracking game between Wasps and Sale Sharks. Sale Sharks came in with the better record, having beaten Yorkshire Academy and run Leicester Tigers close, while Wasps came in still in search of a first victory. However in club legend and academy coach Andrea Masi’s final ever game as an academy coach, his charges pulled out all of the stops to secure a brilliant 20-19 victory.

The final game on Saturday was a real try-fest and Newcastle Falcons welcomed the 2018 and 2019 champions, and shared 2020 champions, Leicester Tigers, to Kingston Park. Both arrived with the same records, two wins and a loss, and had shown loads of enthusiasm and potential throughout, and that bore out on the pitch as the tries came pouring in. More came on the Newcastle side though as the host pulled away to a brilliant 43-29 victory, capping a four game campaign that has seen them be one of the brightest contenders off the pitch too, particularly with their ‘The Last Dance’ team announcement videos.

That all led to the conclusion of all U18 rugby in England on Sunday as Yorkshire Academy and Northampton Saints took each other on at Doncaster Knights. These two have both been utterly fantastic off the field as well as on it, really celebrating the opportunity that has been allowed through having these games and celebrating the achievement of the players in being involved, particular the Yorkshire Academy, for whom the last year has been especially uncertain.

On the field we were given a treat, both sides absolutely free-flowing as 77 points rained down in Doncaster. A half century of them went to the Yorkshire Academy as they sealed a 50-27 victory, their third in this four game campaign, a quite brilliant achievement.

There was also some U20 International action happening as the build up to the U20 Six Nations later this month continues. England had racked up victories in training games over Scotland twice, and now took on Wales in another training game. The young English stars were in sensational form once more as they strode away to an outstanding 41-5 victory.

Signing off the Academy Season

In the end, of course, this 4 week window of games was never about the scores or the headlines, it was about the 23 or so players in each squad each week getting the opportunity to wear their academy jerseys again. For the U18s this was either the last time in the club shirt as  before turning pro, or the last time in the club shirt full stop. Either way, an emotional moment for all and a blessed relief that they were able to do so

When reflecting on these games it will be the memory of being able to play once again, rather than what happened, that will live long for all.

PrevPreviousUnder the Radar
NextSchools Rugby: Final weekend of school rugby leaves all with memories for a lifetimeNext