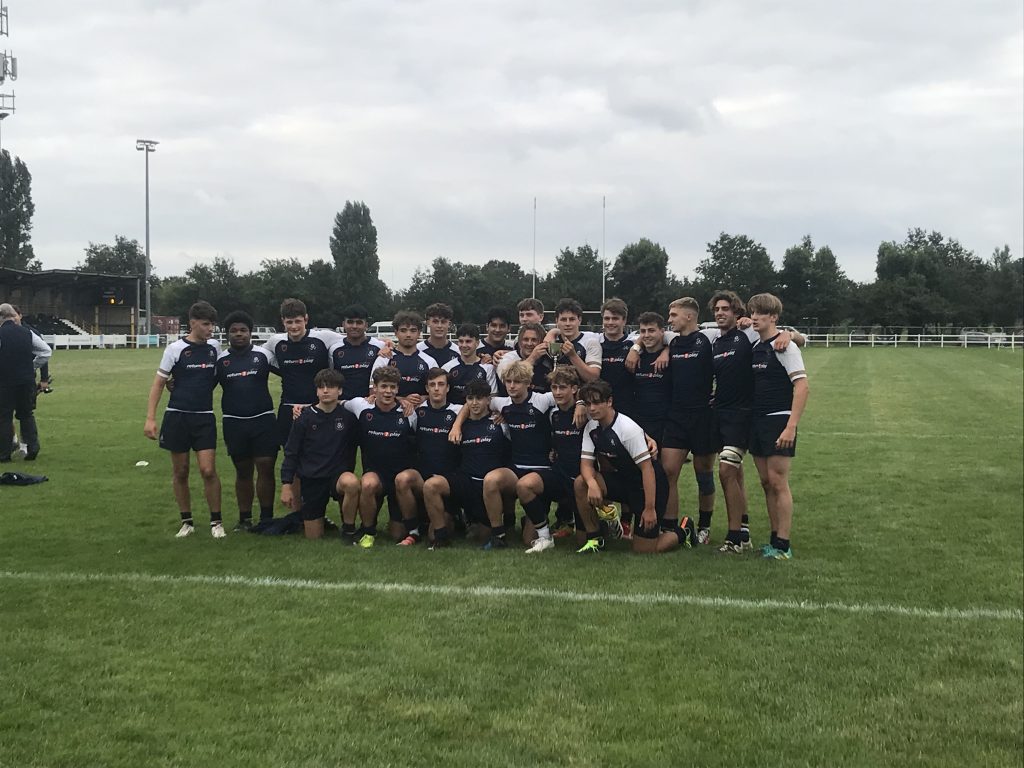 Whitgift sealed the prestigious pre-season Esher President’s Cup on Wednesday in a tense a tight day of rugby in Surrey, culminating in a close final against local rivals Trinity School.

Whitgift had won the tournament the last time it was played, 2019, though none of this group would have played in that triumph, and they got their title defence off to a good start with a 10-0 victory over Hampton. With conversions and penalties not being taken, all scores in these games were tries and try count was going to prove a huge factor in this competition, not least in Whitgift’s group.

Up next for the men in blue were Tonbridge, who had beaten St Benedict’s 10-0 in their opener and backed it up with a passion-filled performance against Whitgift, which saw them score in the final play of the game for a 10-5 victory that completely turned the group on its head. Hampton swiftly followed with a 10-0 victory over St Benedict’s that sent the teams into the final set of games in the group with everything to play for.

Whitgift were up first, facing St Benedict’s in what was the Ealing side’s best performance of the afternoon. They ran the champions close despite probably slightly smaller squad depth that many, who were rotating up to 25 players, but it was Whitgift that emerged victorious, 15-10. In doing so they had scored three tries, which was to prove crucial.

That led to the final game of the group, Tonbridge v Hampton. Both sides knew what they had to do, injury hit Tonbridge would reach the final with any sort of win, while Hampton needed to win and score 5 tries as they had to outscore Whitgift’s total, having lost their head to head. Hampton did the first part of the job, securing the win, but the 5 tries proved elusive as they sealed a 10-0 victory.

That send Whitgift through to the final, while Hampton would play in the 3rd Place Play-Off, with their opponents coming from the equally competitive Group 2.

Early on Group 2 looked like Millfield’s to lose after an impressive display in attack and defence saw them beat Epsom College 10-0. Trinity raised a few eyebrows with a 5-0 win over ACE side Truro College, but they were to raise even more with a stunning 10-5 victory over Millfield straight afterwards.

In truth, few should have been surprised by Trinity. This was a group whose U6th were a successful U16 side in their last proper season, and whose L6th were one of the top U15 sides in the country that same year, and who, but for a controversial late try against them, would have reached the Schools Cup semi finals before Covid interrupted.

Millfield got quickly back on the horse with a 10-0 victory over Truro College, for whom the day would end without a victory after Epsom College had also beaten them, 5-0.

That sent Trinity into the final game of the Group against Epsom College, and both sides had a chance of reaching the final. For Trinity the game was relatively simple: avoid defeat. For Epsom, more tricky, they had to win and to win with plenty of tries. As it was, the game ended in a 5-5 draw sending Trinity into the final to face local rivals Whitgift, leaving Millfield in second place to face Hampton in the third place play-off.

It was a close encounter in the third place game, two sides showing plenty of attacking verve and ambition, but it was Millfield that were to come out on top with a 5-0 victory and a deserved 3rd place having played some of the most exciting rugby across the afternoon – they will be a strong side this year.

The final was an altogether tighter display, despite being played on the enormously wide Esher RFC 1st XV pitch. Whitgift, in dark blue, and Trinity, in sky blue, played out an incredibly tense and combative final. Only one score could separate them, and it was Whitgift, the perennial President’s Cup achievers, that sealed it and laid down their marker for the season.

It might only be pre-season but this was a competition of the highest order, as always. Different schools are at different stages of preparation, of course, but the question on the lips as the cars drifted out into the rush-hour traffic was this “could Croydon dominate school rugby in 2021/22?”

There is a long long way to go yet, but the likes of Trinity, Millfield, Tonbridge, and, of course, Whitgift, have laid down an impressive marker at the start of September.