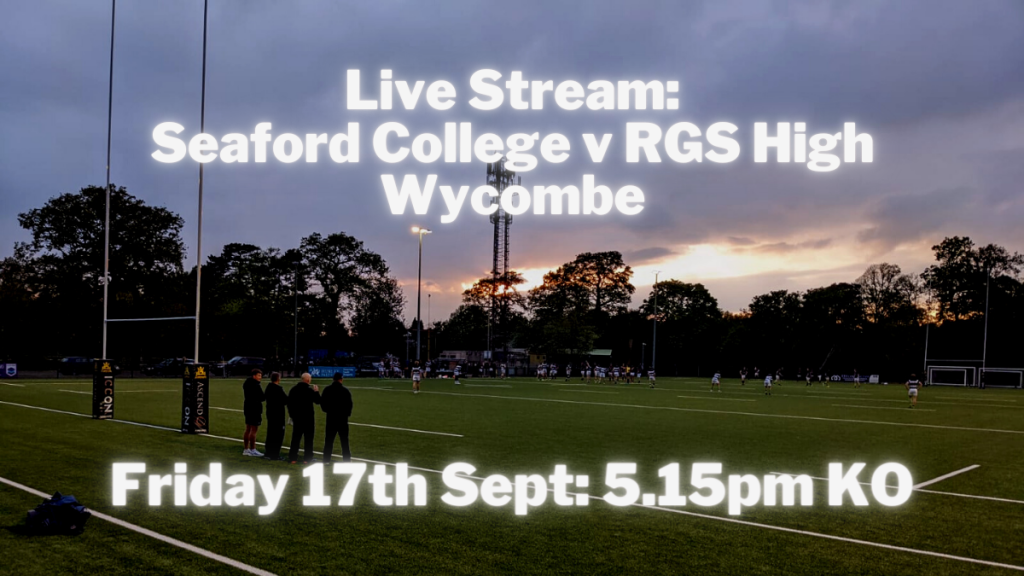 On Friday the first of our Live Streams for the 2021/22 Schools Rugby season will take place as Seaford College host RGS High Wycombe under the lights.

Each has been in pre-season action, playing in Triangular tournaments over the last couple of weekends, Seaford College performing well on the first weekend of the month with a victory over Trinity and narrow loss to Tonbridge, while RGS were at Abingdon over the weekend where they beat Hampton and lost by a single point to the hosts.

Adding to the contest is that fact that back in May, during that month long period of rugby for some, these two met under the lights at Cobham RFC. As in many games in that period, it was a slightly disjointed affair with a number of players missing due to academy commitments, however there were certainly some signals for Friday night’s game that could be gleaned from it.

Overall Seaford College had the edge in the game, which was split into several shortened games as the sides changed with each stoppage. However the key period from a 2021/22 season point of view was the second period, where the two L6th groups went head to head, a period just edged by RGS High Wycombe.

The likelihood is that that 15 minute period is unlikely to have much bearing on Friday night, not least because there were amended Covid laws in place at the time, plus Friday’s teams will include last year’s U16s, who were not in attendance.

Nevertheless, what it does do is add just a little bit of added spice to this fixture – the last competitive game for either of these sides was that game back in May, now they meet again and the excitement is already at fever pitch.

It is the first of a couple of live streams in quick succession for Seaford College, on Wednesday they meet Haileybury at Saracens’ StoneX stadium and our cameras will be there for that, either side of Woodhouse Grove v Barnard Castle on Saturday 18th, a week on Friday our cameras then take in Warwick v Denstone College as the big games start to roll in thick and fast.

It all begins on Friday night though, with Seaford College welcoming RGS High Wycombe and it is sure to be a magnificent occasion. Seaford College are one of the fasted growing schools on the rugby circuit, becoming an ever more dominant force as the years go on, while RGS High Wycombe are one of school rugby’s most famous names, with the likes of Matt Dawson, Nick Duncombe, Tom Rees, and Christian Wade among their rugby playing alumni.

It promises to be a wonderful night of schoolboy rugby!

If you would like one of your school’s games or tournaments to be live streamed, please get in touch via richard@nextgenxv.com