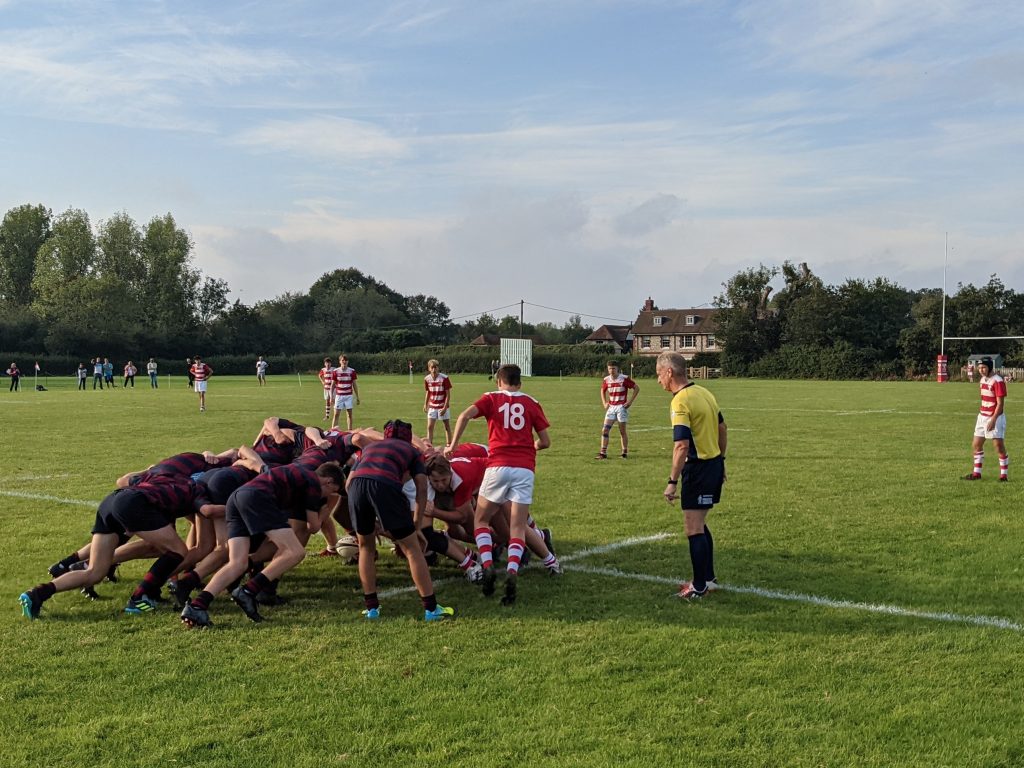 Brighton College produced excellent defence to resist first half pressure and outscored the hosts, Hurstpierpoint College, by four tries to two to clinch this U15 Schools Cup, London & South-East B Division game by a score of 24-12

It was way back in March 2020 that this correspondent had last had the pleasure of watching a National Schools Competition: the U18 Vase Semi-Final at Sutton Valence, with the first lockdown following only a few days later. However, it was as if we’d never been away, with the familiar colours of the two Sussex based schools, perennial rivals, being sported in the late afternoon sun in the lee of the South Downs, and with the seemingly ever-present Phil Bowers handling the refereeing duties and Harlequins Academy staff represented on the touchline.

The game began with the home side enjoying the slope advantage and they used that effectively to dominate territory and possession for most of the first half, but the early pressure from Hurst was soon countered by a breakout from defence and the chase for a kick through to the left corner was won by Brighton left wing Dillon Moss who showed his Sussex 200m medallist’s pace to gather and score. The touchline conversion attempt by fly half Seb McNamara was well struck but unsuccessful.

Hurst redoubled their efforts, winning a penalty following the restart which was kicked to the right corner. With U14 rules being played and thus no lifting allowed possession from the lineout was something of a lottery and Brighton were able to clear, but their kick was run back by full back Matt Hawke and successive penalties conceded by the defence. This time Hurst were able to secure possession from a lineout on the left and first hooker Hector Powell and then centre Oscar Mann drove close to the line, but the defence held firm. For a second time defence was quickly turned to attack by Brighton with the ball moved at pace through the hands on the right, where the move was finished by centre Alex Stubbs who stepped past attempted tackles before crossing and scoring under the posts, McNamara adding the conversion.

Once again from the restart Hurst mounted renewed pressure inside the Brighton 22 but continued to be penalised at the breakdown and half time was reached without further addition to the score.

The second opened with Hurst continuing to see most of the ball, Hawke combining with left wing Olly Goswamy on the left, but the move was stopped by tenacious defence. Brighton scrum half Josh Clift may have been one of the smaller players on the field but what he may have lacked in stature was more than compensated by energy and he drove the Brighton forward pack to relieve the pressure. Space was again created when the ball was moved wide on the left and Moss showed his sprinter’s pace to dive over in the corner for his second try. Although the difficult conversion was missed, the visitors were now three scores clear.

At last, the home side were able to capitalise on their territorial advantage, finding space out wide on the right where Hawke crashed over in the corner. Although fly half Ben Willsdon’s touchline conversion attempt narrowly missed, Hurst were finally on the scoreboard. Their revival of fortunes was however short lived when following the restart Brighton drove to the 22 on the left and Stubbs, now playing at scrum half, crossed for his second try, McNamara producing an excellent kick to add the extras.

Despite the adverse position on the scoreboard, Hurst showed that they were not finished. Winning a penalty on the Brighton 22, they won the ensuing lineout and flanker Jonty Pearson drove over on the left, Willsdon converting to narrow the gap to twelve points. Another quick score would set up a potentially thrilling last few minutes, and Hurst soon moved the ball through the hands on the left, forcing the defence to concede successive penalties, but a handling error gave Brighton the put-in at a scrum. Although possession was won, the attempted clearance kick was charged down and pressure on the Brighton line resumed with Mann trying to step through on the right. When he was stopped, play was switched to the left and the defence was forced to concede another penalty 5 metres out. Hurst No 8 Arthur Kempson used his physical presence to make some hard yards and although he was stopped another penalty was conceded, Mr Bowers this time showing yellow. After a lengthy penalty advantage had been played, Hurst were, with time running out, again thwarted by good defence and a handling error allowed Brighton to regain possession from the set scrum and clear to touch to bring the final whistle.

Both teams acquitted themselves well after a long period without competitive Rugby. This was an enjoyable game: a good advertisement for U15 Cup Rugby. There are a number of other strong sides in this Group, including Whitgift, Epsom and Trinity but with no U14 form to go with from the previous season there will be plenty of scope for potential upsets in the best tradition of Cup competition. Hurst will move to the Plate where they could progress some way.