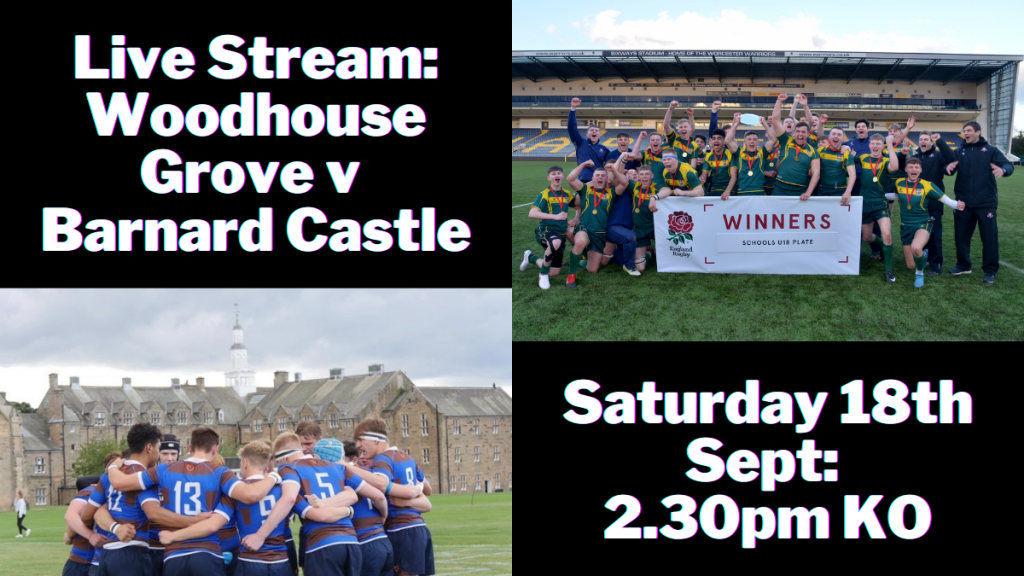 Saturday sees the NextGenXV cameras move on to a massive game in Yorkshire between Woodhouse Grove and Barnard Castle.

The 2.30pm kick off is the second live stream of the weekend as we also bring you Seaford College v RGS High Wycombe on Friday night, the start of a run of four live streams in eight days.

Woodhouse Grove v Barnard Castle will be a massive game, two of the strongest sides in the north of England in the last few years going head to head right at the start of the season.

Prior to rugby’s shutdown, Barnard Castle were enjoying arguably their best season since their glory years and were looking like one of the top teams in the country. They have picked up at the start of the 2021/22 season where they left off, enjoying a brilliant 50-0 victory over Hymers College last weekend in their opening game of the season.

Woodhouse Grove will be a step up though, the Yorkshire side have been one of the very best in the country in recent times, winning the Schools Plate in 2018 and reaching the Cup semi finals in 2019.

It is a first official game of the season for the men in green though, they played rivals QEGS Wakefield last week but that was very much a pre-season encounter, and prior to that they had given a good account of themselves at the King’s Macclesfield pre-season Festival. So while they may not have ‘competitive’ game time under their belts, they are a long way from being undercooked – this is a well prepared unit.

It all sets up for a magnificent occasion and one that we are delighted to be bringing live to the screen, two of the biggest names in schools rugby going head to head right at the very start of the season.

Barnard Castle are, of course, known the world over for having had the likes of Rob Andrew, Rory and Tony Underwood, Matthew Tait, Callum Clark, and, most recently, Guy Pepper, pass through their halls, among others. Woodhouse Grove have plenty of well known sons too, especially in recent times with promising youngsters such as Joe Carpenter and James Whitcombe making their mark, look out too for Ned Hawker making waves on the pro scene.

The past is the past though, Saturday is all about the current occupants of those 1st XV jerseys, about enjoying simply being back playing rugby again after so long, and a chance for the next young stars from these two famous schools to show off their talents.

It should be a wonderful afternoon of schoolboy rugby!

If you are interested in having your school games live streamed, please get in touch via richard@nextgenxv.com