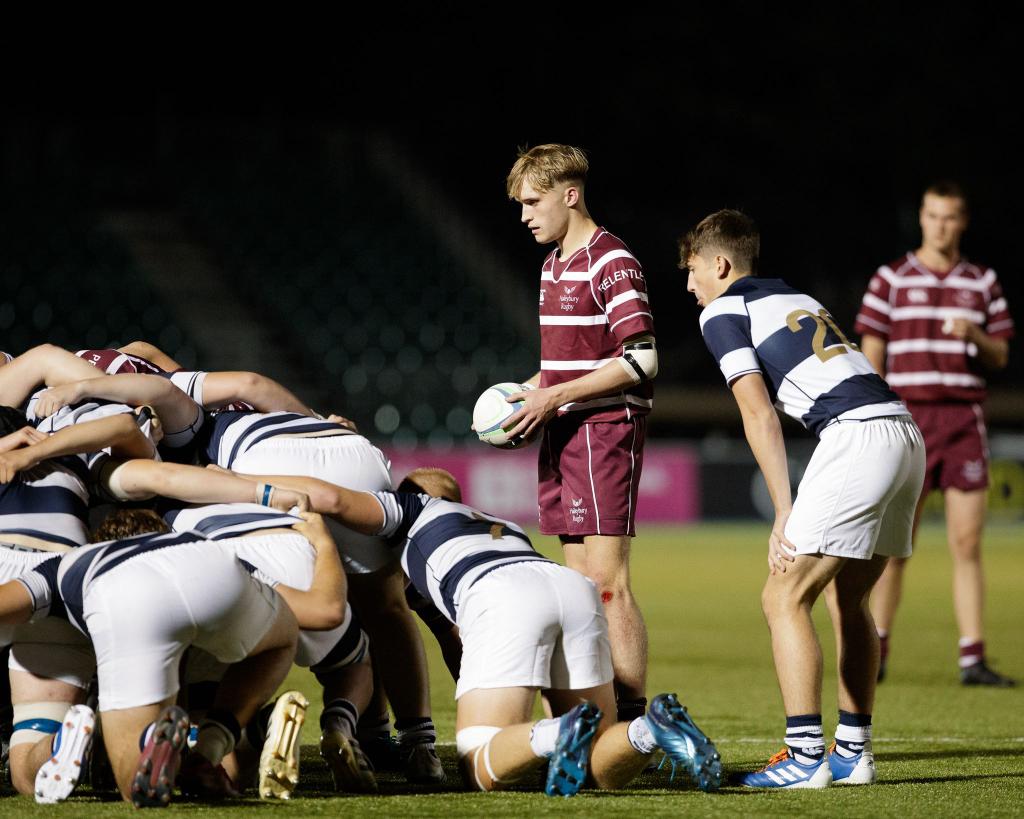 It has been a bumper week of schools rugby, with a huge number of schools opting to play in midweek as a result of exeat weekends coming up.

That meant games on every day this week, including a Wednesday that looked more like a Saturday fixture list than a midweek one.

One of the key fixtures came on Wednesday night as Haileybury and Seaford College met under the lights at Saracens’ StoneX Stadium in our live streamed game, which you can see highlights of below. It turned out to be an absolute thriller, ending in a 13-13 draw courtesy of a late Will Bowley try to level things for Seaford College, before Haileybury almost snatched victory with a late surge at the tryline with the final play.

The action all began on Monday though, and it was a hastily arranged fixture between Queen Ethelburga’s and Sedbergh, after weekend fixtures had been cancelled. The two sides managed to organise to get together on Monday, and Sedbergh demonstrated that their prowess of recent years absolutely remains with a stunning 52-7 victory away from home. It was much needed, they hadn’t yet managed to play so far this season and with a huge test against Woodhouse Grove on Saturday, the game tie was invaluable.

Tuesday was a day of massive margins, and perhaps the biggest statement of the lot came on the outskirts of Oxford, where Radley College hosted local rivals St Edward’s in their big local derby. Radley have looked good this year, with a strong victory over Marlborough College and a key win against Sherborne, but this was yet another huge statement of their brilliance as they put their rivals to the sword for a 52-6 victory, and in doing so sent yet another reminder of what a force they may be. For Teddies, they have time to quickly bounce back, facing Magdalen College this weekend.

There were two huge games in Scotland and Merchiston Castle laid down a huge marker in one, against another of Scotland’s biggest names, Fettes College. Merchiston, who today released the sides that will be attending their Festival in mid-October, were utterly sublime en route to a 50-0 victory away from home.

Edinburgh Academy were no less impressive, beating Morrison’s Academy 50-5 on home turf. Meanwhile back in England there was Schools Vase action as King’s Ely were on fire with a 52-0 victory over St Ivo to progress to the next round.

Our cameras went to North London to take on Haileybury v Seaford College at StoneX Stadium, a magnificent occasion and game as the two sides simply could not be separated. Both were incredibly competitive on the floor, with opensides Toby Rynn and Tom Sunray running riot.

Powerful centres Henry Boyle and Dan Hoyes, of Seaford and Haileybury respectively, exchanged tries, but it was the ultra-long boot of Ben Spencer that had Haileybury out in front. However with barely a minute left Seaford College’s magical fullback Will Bowley scored a wonder try from a goal-line drop-out return to level the scores, only for Haileybury to respond by camping on the Seaford line, however the defence held out to leave the final score at 13-13 leaving all around soaking in a wonderful schools rugby atmosphere.

That was far from the only big game on Wednesday though, and one of the very biggest was a monster Anglo-Welsh clash between two of the biggest names in English and Welsh schools rugby, Millfield and Coleg Sir Gar. Two giants of the game battling it out, but it was Millfield that were to leave this game having laid down the sort of marker that puts the rest of the watching schools rugby world on high alert, having won the game by a stunning 45-7 margin, backing up their 47-5 victory over Blundell’s four days before.

Another side laying down marker after marker are Stowe, who made it three on the spin with a superb 28-8 victory away at Bloxham. Stowe are beginning to look like a side that need to be taken very seriously indeed this year.

So too Dean Close, who were in fine form with a 34-0 victory at home to King’s Gloucester. Meanwhile Magdalen College are looking in fine form ahead of their derby v Teddies this weekend, beating Cokethorpe 40-0 away from home on Wednesday.

Elsewhere Wirral Grammar backed up their Top 5 School Teams of the Weekend form with a brilliant 36-17 victory at local rivals Calday Grammar, while elsewhere in the north west there were victories for AKS Lytham, 19-12 v St Edward’s, and Lymm High School in the Schools Cup, with a 29-11 defeat of Bolton.

There was plenty of Schools Cup action elsewhere on Wednesday, St Paul’s being among the pick of the bunch with an impressive 50-0 victory over Emanuel. Meanwhile Truro School, always a handy Cup team, beat Plymouth College 36-12 away from home.

Over in the Vase, meanwhile, City of London Freemen’s were on form at home to Glyn, 26-7, while Shrewsbury sealed a tight 12-10 victory over Wrekin College. Giggleswick were also in cracking Vase form as they put Riply St Thomas’ to the sword, 46-10.

Shiplake College were on great form in a cracking encounter at Lord Wandsworth College, winning 24-10, while Aylesbury Grammar had a day to remember at home, beating Royal Latin 40-0.

In London there was plenty going on, not least a brilliant 46-0 victory for Merchant Taylors’ against Watford Grammar. Meanwhile Hayes were on top form, 32-5 at home to Royal Alexandra & Albert. Fulham Boys won 34-5 at home to Wetherby, while Gordon’s non-ACE side won a seriously tight battle at Tiffin, 21-19.Gravesend Grammar had a day to remember as they beat Wilimington Grammar 57-15, Grey Court meanwhile won 31-19 at home to Esher College, while Simon Langton travelled to Duke of York’s and game away with a 27-12 victory.

Elsewhere in the country, KES Five Ways were impressive on the road at KES Straford, while Old Swinford Hospital’s 2nd XV were brilliant, beating KES Camp Hill 31-5 away from home. Newcastle-Under-Lymewere also in great form on the road, beating Queen Mary’s Grammar 53-12, so too King’s Grantham, who won 31-14 at Worksop College.

In the South West St Edward’s Cheltenham were in form on the road too, winning 36-17 at Sibford, while The Crypt were in great form at home, beating Marling 34-0. Shebbear College won 5-0 at home to Kingsley. Meanwhile in Wales Christ College Brecon had an absolute stormer, beating Amman Valley 59-7.

Lady Manners won a great game at home to Nottingham High, 33-20, while there were victories for John Hampden, 22-12 v Sir William Borlase’s, and Clarie’s Court, 31-17 at home to Holyport, too.

Thursday was a massive day, and perhaps no bigger than on Thrusday evening as Clifton College hosted Rugby School in the Ryan Bresnahan Memorial match. This had a huge feeling that it would be a high level contest, Clifton College were expected to be superb coming into this season and were unbeaten, so too Rugby, who had been sensational against Bedford at the weekend. A result put into even more context on Thursday as Bedford beat Uppingham 40-15 away from home, a quite brilliant return to form after the weekend’s disappointment.

That left everyone feeling that Rugby must be utterly exceptional, which only serves to demonstrate just how good this Clifton College outfit can be as they put in an utterly magnificent performance to defeat Rugby 27-0. A stunning performance.

Elsewhere, Tonbridge continue to march on and impress. They were at home against Eton College and delivered yet another brilliant performance to win 40-26, with full back Joe Baldwin in absolutely sizzling form.

Cheltenham College bounced back from disappointment at the weekend to head to Marlborough College and return home with a strong 22-12 victory. Meanwhile Ipswich remain a side to keep a close eye on, they travelled up to Oundle and returned home having edged a cracking battle, 24-19.

The South West was pretty busy but among the business Prior Park College stood out with a brilliant 50-7 victory over Wells Cathedral, meanwhile King’s Bruton beat Wycliffe College 15-0, and in the Schools Vase Clayesmore were brilliant value for their 24-7 victory over Gillingham to send them into the next round. Meanwhile in the South East, King’s Rochester won 19-12 at Cranbrook.