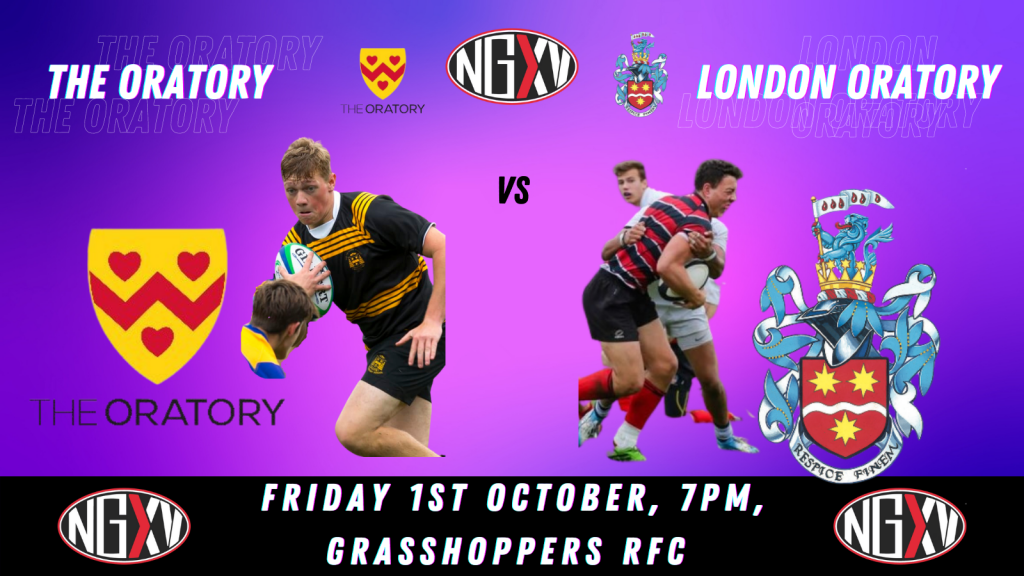 This Friday night the NextGenXV live stream cameras will head to Grasshoppers RFC in West London as we bring you the massive Oratory derby between Berkshire’s The Oratory and London Oratory.

It is the latest in our series of live games and takes in two sides with more common history than almost any others in the country.

A shared name, and shared background, but in the context of Friday night a shared passion for the game of rugby and all that it entails. The magnificent stand at Grasshoppers RFC is likely to be packed out and a special atmosphere will ring out across this annual Friday night fixture.

The Oratory have dominated the recent history in this fixture, the 2010s saw them win every fixture while 2020 was lost to the pandemic. However that history is not nearly as important as the context of the two groups of players that will come together on Friday night. In 2018 the U15 game went 33-15 in favour of London Oratory, those players are now in their U6th, though at U16 level the following year it was a similar score in reverse, but it suggests that the U6th players are potentially evenly matched.

Meanwhile the 2019 U15 game, whose players are now in L6th, was an incredibly tight game, ending up 14-10 to The Oratory, so there is every reason to see Friday night being another very close encounter.

This season The Oratory began with a great game at home to Shiplake College but the Henley side went home with the spoils, 20-9. What followed was one of the most bonkers games of rugby of the season to date as they travelled to the south coast and KES Southampton, where a superb and free-scoring game went the way of The Oratory, 55-37.

It’s a short and sharp turnaround for The Oratory ahead of Friday though, on Wednesday afternoon they face Reading Blue Coat in the U18 Schools Vase, which will be a tough game ahead of such a big encounter on Friday too.

London Oratory arrive with a full week’s rest behind them, but in search of a first victory of the season. Having gone down 28-0 to St Benedict’s and 19-0 to St George’s Harpenden, either side of a tough 53-7 defeat to KCS Wimbledon. However, dig beneath the mere stats and the story has more to it, London Oratory are yet to play at home and though Friday is away, it is neutral. St Benedict’s were at peak condition having had a really busy pre-season, while KCS’ early season form has seen them reach our Top 5 School Teams of the Weekend twice in the opening three weeks.

This is arguably the biggest game of the season for both, a real derby game and played out at a stadium with a strong crowd, these are the games that really show off school rugby in all its glory.

These are schools that have seen some of the finest talents pass through their halls too, London Oratory were the home to Beno Obano before he moved to Dulwich College to anchor their stunning Cup runs from 2012 to 2014, while they also boast former Connacht stalwart Michael Swift among their alumni and have won a staggering 57 Middlesex County Championships.

The Oratory meanwhile saw Danny Cipriani run the show before his move to Whitgift, while former Leicester Tigers and Wasps centre Ayoola Erinle is also an old boy. More recently, scrum half Ollie Monye signed with Wasps after finishing school at The Oratory last year, and is now getting plenty of game time at The Rams, who are top of National League One.

Perhaps on Friday we will see a few more stars of the future from these two schools, either way, it ought to be a fantastic occasion.