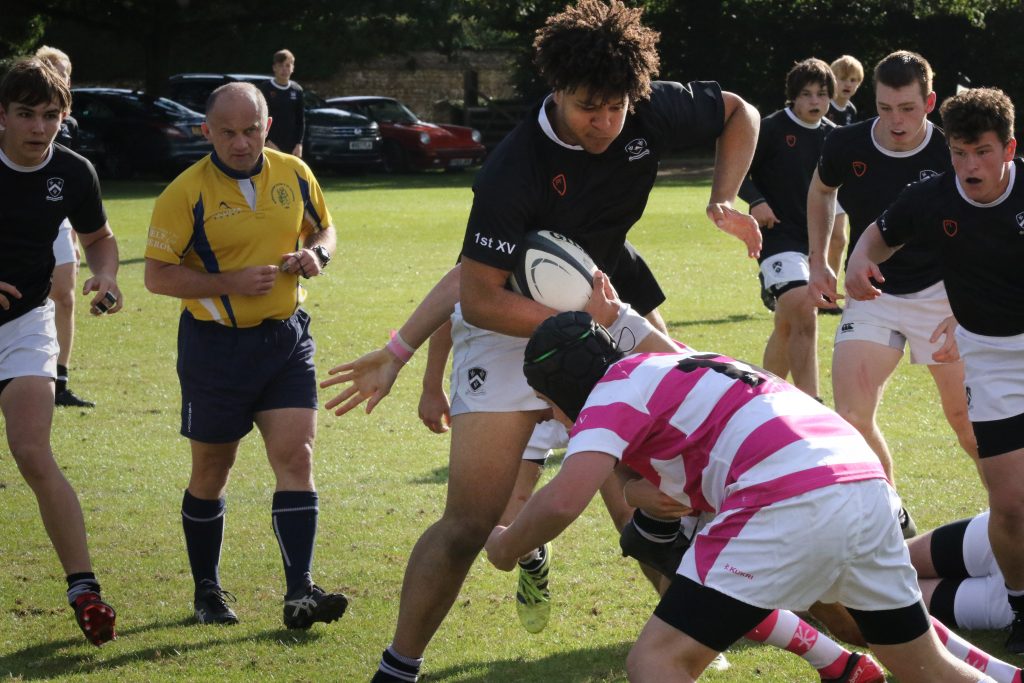 It has been a big week of schools rugby as the U18 Schools Cup got underway in fantastic fashion.

As ever the first round saw a few walkovers, although this year many were due to covid complications, but there were some thrilling games of rugby in each and every section, and some huge fixtures between Cup legends booked in for Round 2.

Those that fell in round 1 will go into the Schools Plate, and the draw there mirrors the Cup, while there were also a handful of Vase games and a few other games dotted about the country.

North A’s first round is almost concluded, with just Lancaster RGS v Stonyhurst College to come on Saturday and the result confirmation from Rydal Penrhos. Kirkham Grammar are probably the headline act through, they could be among this years favourites but will head to the winner of that LRGS v Stonyhurst game, no easy task. Altrincham Grammar won a thriller at Stockport Grammar, 44-34, to set up a tie v St Mary’s College who put in a really strong shift at King’s Macclesfield. Meanwhile it’s straight to the regional semi final for Cheadle Hulme after their 31-15 victory at Merchant Taylors’.

It would be hard to hand-pick a stronger group of schools to make it to Round 2 than in North B! A strong victory for RGS Newcastle and a walkover for Barnard Castle sets up a mouth-watering second round tie between two Cup legends, and then it’s a semi final against another big side, St Peter’s York, from whom it will be their first game. QEGS Wakefield were on form in a 30-17 victory over Grammar School at Leeds, their reward is a huge clash away at Woodhouse Grove after their walkover v Bradford Grammar, with the winner there going straight to the regional final.

Midlands A is all a bit at sea with walkovers awarded to Warwick and Northampton School for Boys, Bedford Modern v Oakham being postponed, and Solihull v KES Aston yet to be confirmed, meanwhile Rugby and Stowe meet next weekend. Nevertheless, two of 2020’s semi finalists are through, Warwick and Northampton School for Boys and will have visions of going far.

It’s been a busy week in Midlands B, Bedford and secured an impressive 47-12 victory at home v Gresham’s to set up a round 2 tie against the former Vase champions Samuel Whitbread Academy, who enjoyed a strong win at home to Norwich. Royal Hospital School go straight to the regional semis after an incredibly tight 12-11 victory at Finborough. Meanwhile it’s a great clash next round between Felsted and Haileybury respectively, after they enjoyed impressive victories in Round 1 over New Hall and Campion, the winner of that will be heading straight to the Regional Final.

Hampton ended KCS Wimbledon’s impressive run with a 16-3 victory that will see them travel to St Paul’s in Round 2, St Paul’s beat Emanuel 50-0 last week. The winner in that will meet Dulwich College in the regional semis as they have a bye after their 29-0 defeat of Langley Park this week. The result in Watford Grammar v Davenant is yet to be declared, but the winner has the visit of Harrow up next, while the winner of St Benedict’s v Latymer Upper will head straight to the regional semi final.

Whitgift bye to Round 3’

An outstanding performance from Trinity saw them beat Wimbledon College 50-0, they will face the winner of John Fisher v Newman College. Epsom College will await the winner of the second round tie after a walkover against Christ’s Hospital is followed by a bye. St John’s Leatherhead also had a walkover, they will host The Judd who beat Caterham 29-5 away from home. The winner will face Whitgift, the 2019 champions, in the regional semis, from whom it will be their first game.

The top of the draw remains unplayed, with results still yet to come in from the top two games, but there was a fantastic game at the home of the competition’s most successful side, Colston’s, where Sherborne won an incredibly close game 17-5 to set up a tie against King’s College Taunton, who won their local derby against Taunton 17-13. Sir Thomas Rich’s were on form against Marlborough College, 21-12, and will head to either Canford or Bishop Wordsworth’s, who meet next week.

RGS Worcester are into Round 2 after a quite brilliant 45-0 victory at Malvern College, they will face former Plate winners Bloxham, who won a hard-fought encounter against Abingdon, 10-5. Bloxham had the advantage of a strong but unpredictable wind in the first half but reached the interval only 5-0 up, through a try by Felix Hunt. When Abingdon scored early in the second half after slick handling in the backs, it seemed likely that they would push on to victory. Ultimately, the score remained 5-5 for most of the rest of the game, but with the away team looking like going through, a beautifully judged kick downfield by Ben England was gathered by Bloxham for a try by debutant Tom Lockhart. Bloxham hung on for the last few, tense minutes to progress. Radley College continued their unbeaten start, beating Henley College 24-12 to set up a clash of two of the best sides of September, hosting Berkhamsted won impressed again in a 19-0 defeat of Seaford College. The winner of that will face either RGS Guildford or Seaford College in the regional semis, they meet next week and the winner has a bye to that semi.

Giggleswick’s win puts them into the third round, where they will face either Ermysted’s or Crossley Heath. Meanwhile Wirral Grammar’s brilliant 46-0 defeat of King William’s sets up a tie against AKS Lytham, who drew at St Edward’s but progress as the away side. Lymm High School, meanwhile, won a thriller v St Ambrose and will face either The Grange or Sandbach.

Worksop College are into Round 2 after their 10-0 win at Hill House and will face Mount St Mary’s College. Meanwhile at the top of the draw it was Round 2 action and a brilliant 31-7 win over North Eastern rivals Durham for Dame Allan’s, a brilliant victory. A trip to either KES Morpeth or Newcastle School for Boys is their reward. Ampleforth College’s great form carries on with a 39-12 victory at Yarm, they will host either St John Fisher or Harrogate Grammar next. While Trent College were in sparkling form at King’s Grantham, 24-0, and will meet Loughborough Grammar in Round 3.

The Perse 40-7 Bishop’s Stortford College (Round 2)

Oundle caught up their Round 1 game with a 57-9 defeat of Bishop Stopford to set up a trip to Spalding Grammar. Meanwhile in Round 2 Coventry College were sensational in a 52-7 defeat of Leicester Grammar, they will meet the winner of the Hereford derby in Round 3. The Perse were also in tip-top form, beating Bishop’s Stortford College 40-7 to head to Round 3 at either Wymondham College or The Leys.

Bishop’s Stortford High are through to host either Hitchin Boys or Sandringham after a 26-12 defeat of Richard Hale, while St Columba’s College are also through to Round 3 after a stunning 46-0 win at Beaumont, they will host either Parmiter’s or Hemel Hempstead. Aylesbury Grammar enjoyed a hard-fought 22-10 victory over Magdalen College, and will now host St Edward’s Oxford in Round 3, whom Magdalen College beat last Saturday in the regular Saturday block.

London & South East A is a little tricky to update as a lot of Round 1 has not been confirmed. However what is confirmed is that Shiplake College are through to Round 3 after a brilliant 19-10 victory over Dr Challoner’s. So too are Farnborough 6th form College, who claimed one of the biggest scalps in their history with their 23-3 defeat of Reed’s. Wallington County Grammar and Worthing College will meet in Round 3 after beating Saint Cecilia’s and Reigate Grammar respectively.

It was a busy week in London & South East B, Ravens Wood will face either Worth or Skinners’ in Round 3 after a brilliant 45-3 victory at Trinity, Sevenoaks. Eltham College are also into Round 3 with a 25-7 victory at Robert Clack, Seevic College or Brentwood will be their opponents. Dartford Grammar and Sutton Valence will meet in Round 3 after both put in sensational Round 2 performances, Dartford winning 44-7 at St Dunstan’s and Sutton Valence putting sixty past Oakwood Park away from home. Maidstone Grammar, meanwhile, will host Simon Langton after a 17-12 win over King’s Canterbury, Simon Langton were 27-21 victors at Duke of York’s.

It was quieter in South West A but Wellington School travelled to Exeter and came away with a 20-14 victory, their reward is a Round 3 trip to either Truro or Mount Kelly. Bristol Grammar were on song, beating QEH 19-10 away from home and will now host either Malmesbury or Marling, while The Crypt beat former Cup champions St Peters, 16-12, and will now be on the road again in Round 3.

There were just two fixtures in South West B. Reading Blue Coat beat The Oratory 21-14, though they will have a change to bounce back in tonight’s live stream. Blue Coat will now travel to either Sir William Borlase’s or Windsor Boys. Churcher’s College, meanwhile, beat Peter Symonds’ College 27-5 away from home and will now host KES Southampton in Round 3, they had a second round bye.

There was Schools Bowl action on Tuesday and Wednesday, with St Lawrence College, Eastbourne College, and Gravesend Grammar all progressing.

Outside of the Bowl, on Wednesday Christ College made their Welsh College’s League debut and what a debut it was, beating Bro Morgannwg 52-0 away from home – a stunning statement.

Thursday saw a fantastic game at Prior Park College, where Cathedral School, Llandaff came away with a famous 18-13 victory. Beechen Cliff’s non-ACE side meanwhile beat Bryanston 19-7 away from home.