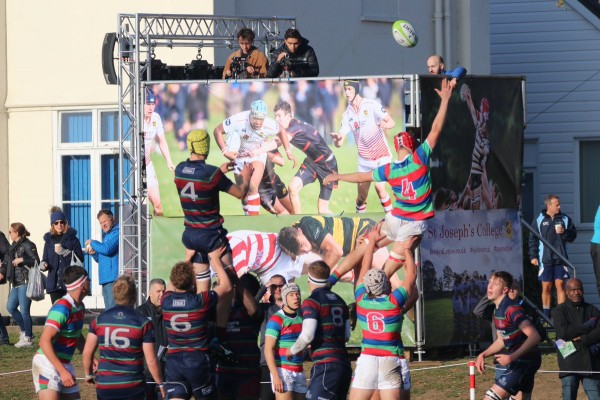 After a year’s absence due to covid, the St Joseph’s Festival returns this weekend amidst much anticipation.

First established in 1986, the Festival is one of the key dates on the schools rugby calendar. Arguably the most arduous and challenging tournament to emerge victorious from, the Festival has featured some of the finest schoolboy players and teams of all time through the years.

NextGenXV will be live streaming the whole Festival, including on Saturday night a live show after the close of play, reviewing the day’s action and looking ahead to the knockout games on Sunday at St Joseph’s College in Ipswich, Suffolk.

Taking place over two pitches, we will have cameras and full commentary of both pitches and you will be able to catch every second of the action.

This year there are some changes to the structure of the Festival, Saturday will run as normal with the sixteen teams split into four groups of four, however on Sunday things are different. Gone are the Cup/Plate groups, and in comes a knockout format for the second day.

From there, winners in each competition progress to semi finals in each competition, losers move to the semi finals of the Plate (for De La Salle Trophy quarter final losers), and Shield (for Bowl quarter final losers. Each of the competitions will have a final and a third place play off, meaning that every side in the Festival will play six games over the course of the weekend, three on each day, and at the end of the Festival every side will be able to be ranked from 1 to 16.

Games are now 25 minutes long, and both days will kick off at 9am, with the final game of the day on each day kicking off at 4.20pm.

The groups, as ever, look exciting. The field is of an unbelievable quality this year and any one of a number of sides could come out on top by the close of play on Sunday. Below is a quick summary of the groups, but you can also head to our group by group guide where we look at every team, make our predictions for who will progress, and give you the chance to vote on who you think will win the 2021 St Joseph’s Festival: Group by Group Guide 2021.

Group 1 looks about as heavyweight as can be with the 2019 champions, and effective reigning champions, Wellington College, heading the field. They will be among the favourites this year having won in 2019 at the first attempt in well over a decade. Indeed after their narrow defeat to Millfield last week we said that those two were one and two heading into the Festival, and there is a possible route for them to meet in the final – what a treat that would be for the viewers.

However it is not a group to get ahead of yourself in, QEGS Wakefield and RGS High Wycombe are legends of the school game and are somewhat specialist in these high-intensity Festival formats, getting stronger and stronger as the weekend goes on, and they are starting from a strong base. As are Denstone College, whom many of you will have seen on our live stream earlier this season. They are a really strong side and have troubled some of the best – expect them to do plenty of that again this weekend.

In the last Festival, 2019, Kirkham Grammar School reached the final at the very first time of asking. Do not be surprised to see them challenging for a similar position again this year, they are one of the strongest sides in the tournament and arrive unbeaten having played against some of the very best teams around.

Dulwich College are Festival legends, famously winning back in 2011 ahead of their three Schools Cups in succession. They have struggled a bit this year but recent performances against Wellington and Bedford suggest a side that is coming to the boil nicely ahead of the Festival. Alongside them are Whitchurch High School, who enjoyed their best ever Festival in 2019 with the brilliant Christ Tshiunza among their charges. This year is a fresh side though, but one that will be keen to emulate that 2019 side and perhaps go even further. The Group is rounded off by Eltham College, Plate finalists a few years ago and a side that will be looking to put real pressure on – in a group that they might just fancy could get them into the De La Salle Trophy side of the draw it things go their way.

This is a really strong group, featuring 2018 champions RGS Newcastle and 2015 champions Hampton. Both could contend again this year, arriving at the Festival with some strong performances behind them so far this season. Ousting them from the top two in the group is going to take some doing but this group is one of the most evenly matched of the lot.

Hampton have already played, and beaten, Hurstpierpoint College. Those two will know each other inside out therefore, which could make their meeting incredibly interesting. With four pieces of silverware up for grabs, Hurstpierpoint will also be immensely keen to get their hands on some for the first time here. Cheltenham College are making their debut, having been scheduled to do so last year. They arrive as a slightly unknown quantity as despite results on paper not going all their way this season, they have faced two of the best around at the moment in Clifton College and Monmouth – there is every chance that they could really get in amongst the mix in their debut year.

Another frighteningly competitive group. Millfield are the most successful side in the history of the Festival, having won it six times. It has been a while since their last title though, 2014, and they will be desperate to get back on the top step. They arrive as narrow favourites ahead of Wellington College after last week’s victory, but things are going to be close. Not east in this group, which looks fierce.

Contained within it are 2017 champions, Brighton College, who are hitting peak form after three really impressive victories on the bounce. They are a side that loves this tournament and almost always challenge right at the top end. Also included are King’s Worcester, who are making their tournament debut and are in red hot form this season, they could be a dark horse to keep an eye on.

What makes this group ultra-competitive though is the presence of the hosts, St Joseph’s College. Forget form, although they are looking handy this year, or anything else – when St Joseph’s College play at the Festival they can do almost anything. It means everything to the school, the staff, and the players, and the emotion both on the field and on the touchlines is something to behold. They last won in 2013, when skippered by England star Lewis Ludlam, and will be desperate to do so again. You can be sure that they will be playing for more than just themselves but also for last year’s U6th that missed out due to the enforced cancellation. This is going to be a group to watch at all times.

The St Joseph’s Festival is the longest running U18 fifteen-a-side competition in the England, its history is synonymous with recent schools rugby history. Millfield and Colston’s have been the dominant sides historically, each winning six titles, Millfield splitting their through the decades, Colston’s dominating that late 90s early 00s period.

The tournament is also famous as a breakout tournament for future stars of the game, with the player of the tournament award going to the likes of Marcus Smith, Zach Mercer, Jonathan Joseph, and Lewis Ludlam in the past, and most recently to RGS Newcastle’s Phil Brantingham in 2019 and Millfield’s Dan John in 2018, two promising young players currently making great strides and Newcastle Falcons and Exeter Chiefs respectively.

This year will be no different, it will be a collection of some of the finest school rugby talent in the country, and a chance for everyone watching at the ground and on their screens to get a glimpse of some of the stars of the future.

HTML Image as link NextGenXV will be live streaming Sunday’s Seaford 10s, kicking off the

HTML Image as link This week sees some crucial fixtures on the schools rugby calendar,