Schools Cup: Berkhamsted into Round 3 with emphatic display at Radley College 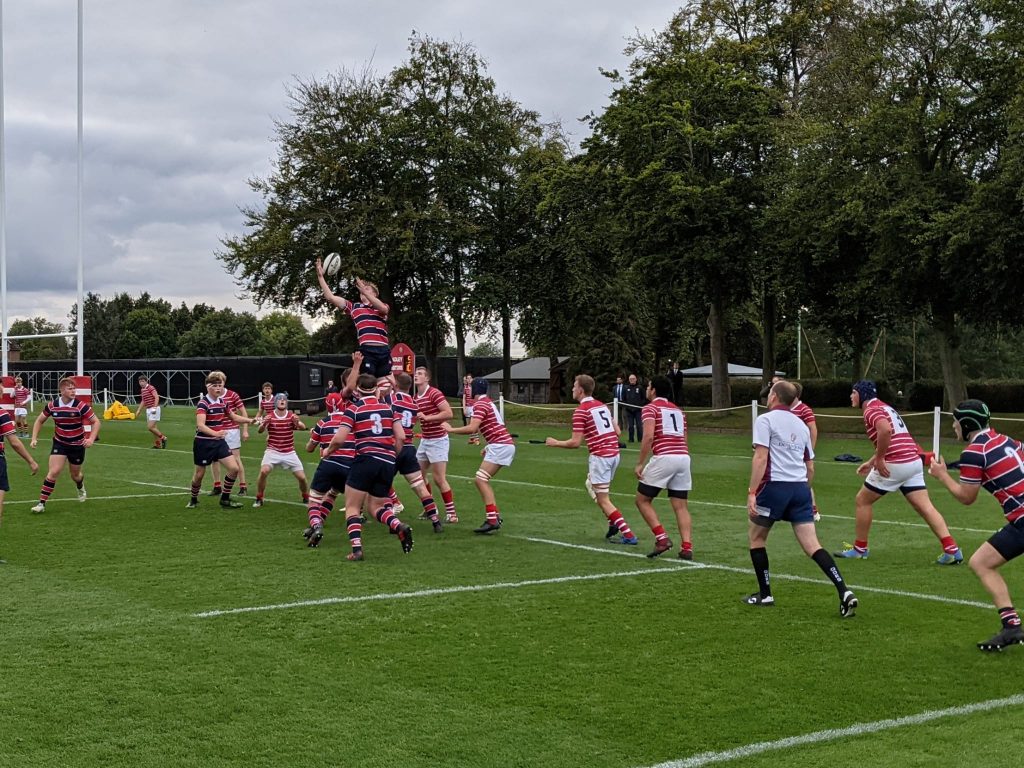 Berkhamsted School conceded an early try in the opening minutes but then ran off 39 unanswered points against Radley College who scored a consolation try on the final play.

This tie looked like one of the more competitive fixtures in the second round of the National U18 Cup, with both schools having made a strong start to the season. The visitors were unbeaten, not having conceded a try, and the home side had only lost to Tonbridge. Berko had progressed through the first round of the Cup with a win over RGS High Wycombe, while Radley had overcome Henley College. Both schools were required by Cup Regulation F.4 to make minor adjustments to their squads, and Radley were without hooker Harry Silman and full-back Benji Tucker due to injury but on paper things still looked finely balanced.

The home side got off to a perfect start, receiving the kick-off, and fly-half Monty Donald, displaying skills reminiscent of his try against St Paul’s, chipped a well-weighted kick over the defensive line, gathered it himself and then repeated the process before kicking the loose ball to the line where it was collected and grounded by flanker Nikita Tutus. The touchline conversion attempt was unsuccessful.

As is so often the case, the side that had just scored proved to be vulnerable at the restart, and Radley were immediately penalised, fly-half Cameron Reibenheimer taking the three points from the tee to narrow the deficit. Berko gained good field position following the restart with No 8 Oliver Webb picking up from the base of a scrum and releasing centres Toby Elliott and Joe Pannese who combined effectively on the left. Although that threat was seen off by the defence, a partially charged down kick was gathered by Berko right wing Ben Litherland who took full advantage of the broken play to dive over in the corner. Reibenheimer’s touchline conversion attempt was perfectly judged.

With an evident change in momentum, Berko continued to enjoy good field position, Litherland running back a clearance kick and linking with Elliott on the right. The home side were forced to concede another penalty but Reibenheimer’s kick from the tee was off target and Radley were able to relieve the pressure, though another penalty gave Berko the opportunity to set up an attacking lineout in the left corner.

Although possession was won from the set-piece, the defence forced a penalty, but the clearance kick did not find touch and Elliott ran it back before linking with Webb, who carried strongly, winning another penalty, which was kicked to the right corner. With possession again secured, the ensuing maul took play close to the line and hooker James Isaacs crashed over. Some on the touchline thought they had spotted a long arm transfer, but the try was awarded and Reibenheimer was again on target with the difficult conversion.

The momentum continued to go the visitors’ way. Although a kick was well fielded by Radley full-back Harry Wilson, a handling error gave Berko a scrum on the left and their backs again showed good handling skills. Elliott linked with full-back Ben Westcott and took play deep into the 22, where flanker Orlando Bustamente gathered and scored on the right. The conversion attempt was unsuccessful.

After Berko had cleared from the restart, Radley looked to run out of defence but were penalised on halfway. Berko made good use of the resulting possession, with Westcott again running strongly before offloading to Elliott. The centre was finally pulled down close to the line and stretched for the score, but the referee was well-positioned and judged that control had been lost.

Radley had made some changes, with Freddie Judd moving to the wing and replacement Will Smith coming on at scrum-half. Although possession was won from a set scrum and recycled through the forwards, another penalty gave Berko the chance to set up an attacking lineout on the right, but the throw was not straight, and Radley were able to clear. As half time approached both sides resorted to kicking for position and the interval was reached without addition to the score.

The exit from the restart was successfully managed by Berko and Radley had the opportunity to move the ball through the hands but were unable to find the necessary width and possession was lost. Bustamante made the most of the turnover, breaking through tackles and talking play deep into the 22. Radley were unable to secure their own ball at the defensive line out and pressure by the Berko forwards ended with Webb forcing his way over on the left. Although the conversion attempt was missed, the deficit was beginning to look insurmountable.

There was a glimmer of hope for the home side when they forced a penalty from the restart and won possession from the ensuing lineout, but their attempts to move the ball through the hands ended unhappily as replacement James Corner intercepted on halfway and outpaced the defence to score on the right. The touchline conversion attempt was unsuccessful.

Radley were able to get good field position with an attacking lineout in the left corner when Berko were penalised. With possession won, the driving maul was established but stopped just short of the line where the defence was perhaps a little fortunate to escape with only conceding a penalty. Radley had the chance to repeat the tactic, No 8 Jack Dennis winning clean possession but Berko were able to clear when the ball was switched to the backs.

A rather lengthy exchange of kicks finally resulted in Berko having the put-in at a scrum on the Radley 22. The first phase ball was moved quickly to Elliott who exchanged passes with Pannese before scoring on the left, Reibenheimer adding the conversion. Unsurprisingly both sides went to their benches and struggled to put together multiple phases, resorting to speculative kicks. After a Berko drop-out from their goal line, Tutus ran back the kick and linked with Judd who put in a grubber on the left. That was fielded by the defence and cleared but was run back well by replacement Freddie Finlan and Berko were forced to concede a penalty.

Although Radley won possession from the ensuing lineout, the defence forced a turnover, but a handling error gave Radley a scrum on halfway, from which they were awarded a free kick. Good work by Dennis saw play taken into the Berko half and the defence conceded a penalty. On what was evidently going to be the final play, the attacking lineout was again won in the left corner and the ensuing maul made progress to the line. Although it was stopped just short, further pressure by the forward pack enabled Tutus to squeeze over and he managed to ground the ball, with Donald adding the conversion and no further time left on the clock.

This was an impressive performance by Berkhamsted who will now host Seaford College in the next round, but in the meantime face a tough block fixture at Harrow on Saturday. Radley struggled to find their best form while playing catch-up once Berkhamsted their first two tries. They will continue with their own strong block fixture list, including the second legs of home and away fixtures against Tonbridge and Sherborne.