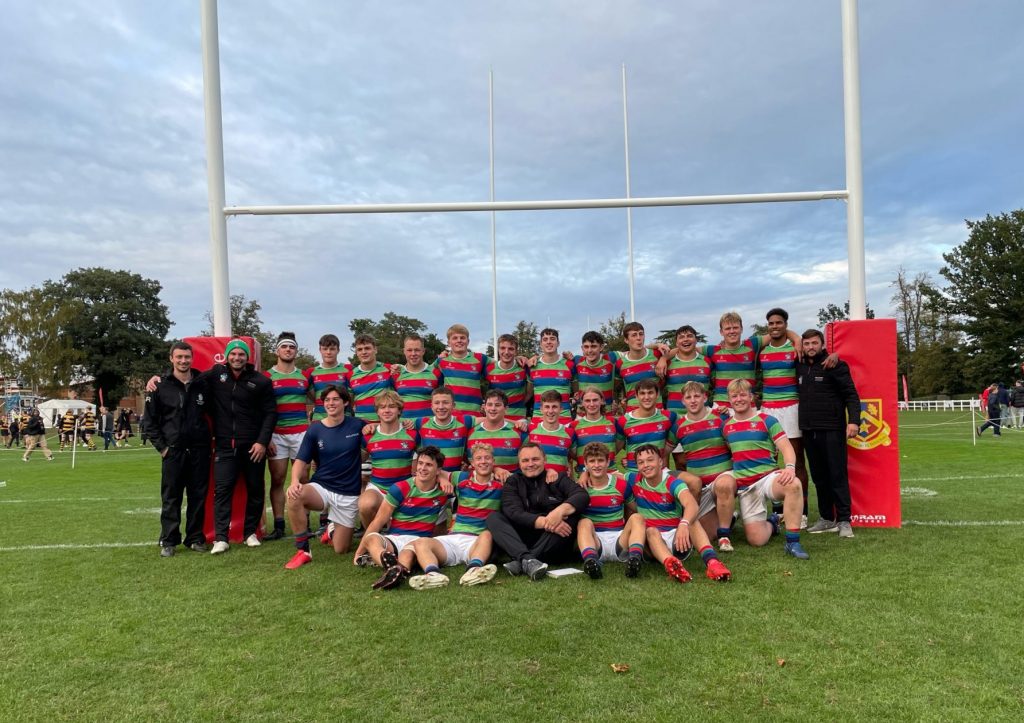 Millfield won a sensational 2021 St Joseph’s Festival with a tense 10-7 victory over Brighton College in the final, clinching a record 7th title in the process.

It takes them out on their own as the most successful side in the tournament’s history, stretching all the way back to 1986, their 7th title taking them one clear of Colston’s. It was a thoroughly deserved success too, they arrived as favourites following their unbeaten start and victory over Wellington College a week prior to the Festival and proved that status as they produced some fantastic rugby over the course of the weekend.

Their route to the final took them via Brighton College right from the very start, with the two sides drawing 0-0 in their very first game of the tournament. Low scoring draws were to prove a theme with the shorter time periods than in previous years, but they were low scoring draws that had you hooked – in simple terms, it was just that teams had not scored yet, not that they did not look like scoring.

What that also meant was that through the knockout stages we got a series of penalty competitions to decide games, including two that involved the hosts, St Joseph’s College, who claimed the inaugural Shield final.

It was a Shield they resided in, in part, after Millfield defeated them 7-3 on Saturday, and the Somerset side then followed that with a 33-0 win to send them to the Trophy quarter finals on Sunday, where them would face Hurstpierpoint College.

The now seven-time champions were in strong from against Hurstpierpoint for a 12-3 victory and then faced Denstone College in the semi finals, Denstone who had finished behind defending champions Wellington College in their Saturday group and then sensationally knocked out one of many people’s tournament favourites, Kirkham Grammar, in the quarter finals.

Denstone could not pull off the same trick twice though as Millfield secured a strong 14-0 victory to claim their spot in the final, and in as low-scoring a day as this, 14-0 really did feel like a very strong performance.

On the other side of the draw Brighton College had a lot of hard work to do, having finished second to Millfield on day one, facing a Hampton side that had defeated them in the regular season but winning well here at St Joseph’s in the quarter finals 12-3.

The semi finals saw them up against the reigning champions, Wellington College, who had defeated Dulwich College 3-0 in a tense quarter final. Things were barely less tense in the semi final, with Brighton College winning just 7-5.

That set up the replay of their group game with Millfield in the final, and the atmosphere on the touchlines felt special. The touchlines of the St Joseph’s Festival can often feel special but often it is when the home side is playing that there is that real electricity, here there was a nervous tension, perhaps it was the penalty shoot outs in some of the other tiers, maybe the quality of the sides, but perhaps it was simply that there was a palpable delight at having been able to finally play this tournament after the pandemic forced the cancellation of the 2020 event.

The atmosphere deserved a great final, and boy did we get one. Millfield were on the front foot early, John Mallett’s side were keen to be expansive from the off. They were rewarded quickly, scoring through second row Oli Smith as the ball was fizzed through the hands on the Brighton College line.

Brighton College were not going to go quietly though, and they came back in the direct manner that they have made their own this weekend, blasting over through second row Harry Browne. Millfield kept plugging away though, continuing to look for the space and as the second half ticked through, they worked it wide via the sublime hands of Sam Harris and Joe Denmark, and underrated star if ever there was one, to star winger Kamoto Kamanga-Durbak, who cruised over in the corner.

It left Millfield 10-7 ahead, but having seen so many draws the tension was palpable around the Millfield support as the clock wore down. It was time for someone to step up and make a big play and the man for it was Millfield number 8 who, with Millfield on the back foot, produced a huge one-man counter ruck to blast past the Brighton College bodies and secure a turnover for his side, who could boot the ball off the field and cue the celebrations.

The superlatives are almost too easy to come by when it comes to describing the success of Millfield on the school rugby scene, but once again they proved that they are a sensational team and they thoroughly deserve being recognised as the most successful side in St Joseph’s Festival history.

The Bowl competition was won by the gritty RGS High Wycombe, a 3-0 victory over RGS Newcastle in the final almost indicative of the tightness seen across the board in every competition. They had come through a quarter final against Eltham College followed by a 6-0 win over Cheltenham College to reach the final, sending Cheltenham to the 3rd place Bowl game, and 11th overall, against Whitchurch High School. The Welsh side were so close to far higher honours this weekend, but did claim that 3rd place in the Bowl with a 12-0 win in the final.

Over in the Shield it was the hosts, St Joseph’s College, that claimed the title in the most sensational manner as they drew 5-5 with King’s Worcester, who were making their debut, necessitating a penalty shoot out that they won 5-4, their second shoot out of the day having also had one in the semi final after a 6-6 draw with QEGS Wakefield. St Joseph’s won that 7-6, sending QEGS to the 3rd place play off, where they defeated Eltham College 10-0 to claim 11th overall.

Ultimately though, the thoughts on a wonderful tournament had to end with Millfield. The men in Blue, Red, and Green were quite simply brilliant. Refusing to curtail their attacking instincts in a tournament that had been dominated by the maul and a slightly more cagey approach as a result of the closeness of so many of the games. That ambition was rewarded as the weekend went on and this utterly brilliant group of young men sealed a record breaking triumph, a triumph that can justifiably be said to position them as currently being the strongest side in schools rugby at the moment.

It was a brilliant two days of school rugby, the rugby was sensational, the tournament as a whole, fantastic, and the atmosphere just brilliant. What set it apart though was that it was happening at all after a year’s absence. The sheer joy in seeing the tournament in action again was clear for all to see.