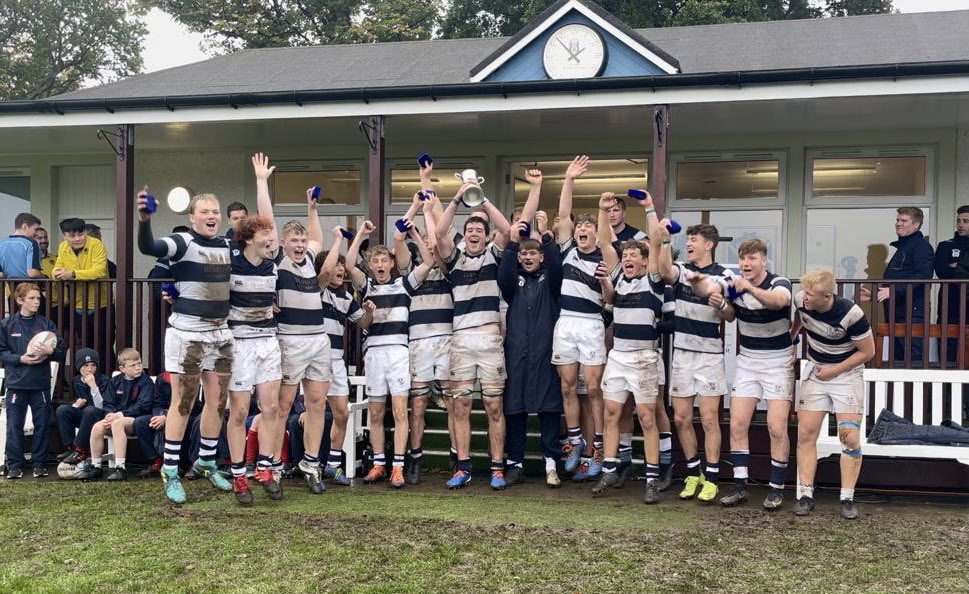 Seaford travelled up as one of the favourites, of the English sides heading up they and Bedford were probably the head of the cast in advance of the tournament beginning, while Stewart’s Melville appeared the pick of the Scottish Schools prior to kick off as a result of having already beaten Merchiston Castle and George Watson’s College, the inaugural winners in 2019, in the build up, the three Scottish club sides were the great unknown.

As it was to turn out, those Scottish clubs were to prove some of the most competitive sides in the competition, while it was the hosts and former champions that pressed the greater case for Scottish schools.

Day 1 saw the opening groups, where the twelve teams were split into three groups of four, the top two from each qualifying for Sunday’s Cup groups, the bottom two for the Plate groups, which would each be two groups of three.

Group A proved incredibly competitive, a draw between Colston’s and Stirling County RFC really blowing the group wide open, but Stirling backed it up with victories over George Watson’s College and Merchiston’s 2ndXV to seal top spot, while Colston’s also beat the host’s 2nd XV but were beaten 17-7 by George Watson’s College, whose earlier victory over Merchiston’s 2nd XV meant that they claimed second spot over Colston’s.

Over in Group B another draw felt like the key game as Merchiston Castle and Bedford finished up 7-7, both defeated Ayr and Wycliffe College, however Merchiston’s greater points difference saw them top the pool ahead of Bedford.

Group C was the only ‘conventional’ group, by which is meant that the top side had three wins, second two, third one, and fourth none. Boroughmuir topped the group, meaning two club side topped the opening groups and all were headed by Scottish sides, after victories over Uppingham, Stewart’s Melville, and Seaford College, with Seaford finishing second thanks to victories over Uppingham and Stewart’s Melville, who finished bottom of the group despite their strong season to date after Uppingham beat them by an impressive 26-5 scoreline.

All of that gave us our Day 2 Cup and Plate Groups, with Bedford, Boroughmuir and Stirling County in the A Group in the Cup, and George Watson’s College looking to defend their 2019 title from the B Group alongside Seaford College and hosts Merchiston Castle.

Over in the Plate, Colston’s were drawn with Uppingham and Wycliffe College, while Ayr RFC had Merchiston Castle’s 2nd XV and Stewart’s Melville to contend with.

Over in the Plate, Colston’s topped their group, beating Uppingham and Wycliffe College, who drew against each other, Uppingham finishing ahead on points difference. The other group saw Ayr beat both Stewart’s Melville and Merchiston’s 2nd XV, with Stewart’s Melville claiming a 9th place play off spot ahead of Merchiston after they beat the hosts.

So the tournament moved onto the knockout stages, where Wycliffe College saw off Merchiston 2’s 12-3 for 11th, Uppingham beat Stewart’s Melville 19-0 for 9th, and Colston’s beat Ayr 13-5 for 7th.

George Watson’s College ended the tournament in 5th thanks to a 10-5 defeat of Stirling County, while Boroughmuir defeated the hosts 5-0 to claim third after a really strong weekend.

Which took us to the all-English final, two schools that have played some fantastic rugby this year in Seaford College and Bedford. Both have had their hurdles to overcome, too, not least here at Merchiston Castle, where both finished second in their Saturday Groups. Both recovered though to reach the final and what a competitive final it proved to be.

Both sides looked strong, despite playing their 6th game of a gruelling two days, and they gave everything in a tense and exciting final. In the end it was Seaford College that claimed it, their strong balance of massive power and exciting and delicate attacking play proving enough to seal them a fantastic 14-7 victory in the 2021 Merchiston Festival.

Seaford were deserved champions, and after a year’s absence, following on from the inaugural festival, it was simply superb to see such a competitive and well-spirited Festival back on the calendar once again. There is little doubt, it seems, that this is fast going to become one of the premier school rugby events on the calendar and these multi-team Festival style events look likely to become a much more exciting and popular option that one or two term knockout competitions of the past, gathering different schools that would not ordinarily get to play one-another into one place in a high-intensity, high-skilled, and wonderfully spirited weekend of rugby.

Between the St Joseph’s Festival, the Merchiston Festival, the Sedbergh 10s, and indeed Seaford College’s own Seaford 10s, a real roster of competitive multi-team tournaments is building.