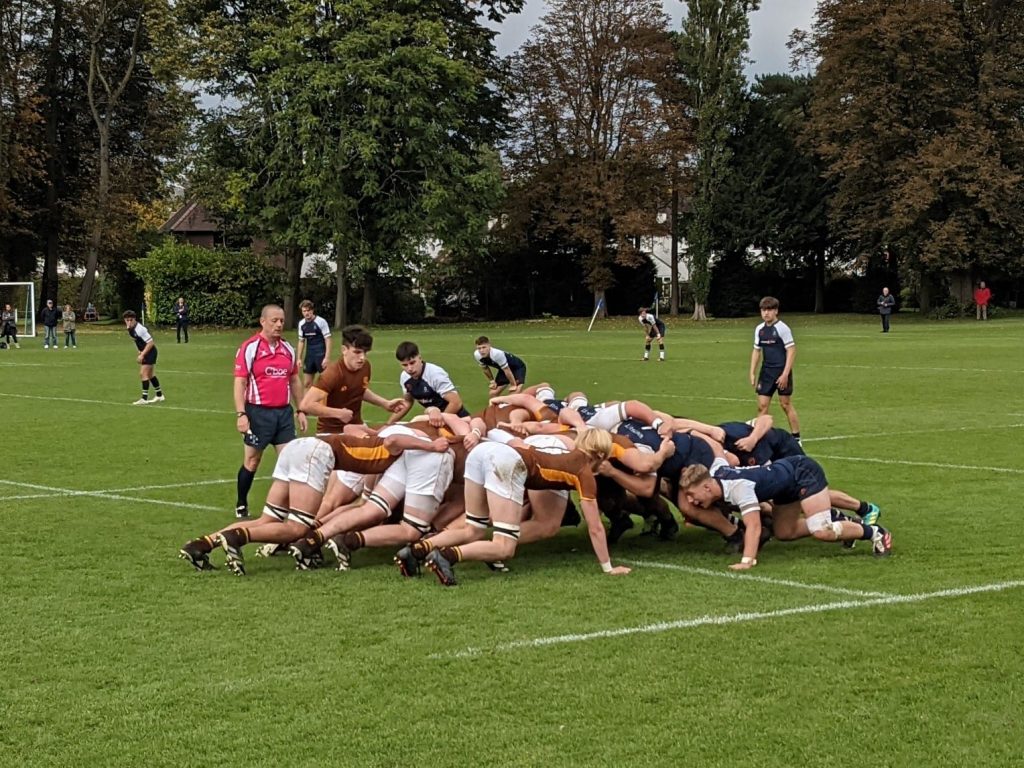 A game that looked finely balanced as halftime approached changed dramatically as Sedbergh School found their stride and ran in five second-half tries to record a 52-13 victory over hosts Whitgift School.

These two sides had been due to meet at the beginning of term, but the fixture had to be cancelled, so when Sedbergh’s plans to play Blackrock College had to be shelved, due to the Covid-19 related logistics of travelling to the Republic of Ireland, this was a welcome late addition to the calendar. Both sides had been forced to make some changes to their starting line-up due to injury, with Jack Ellam switching from prop to hooker for the Cumbria school and Jamie Flatley moving from centre to fly-half for the South London school but were close to being at full strength. Sedbergh were unbeaten on their circuit, and Whitgift, winners of the pre-season Esher President’s Cup had lost to Wellington but had been victorious over Harrow.

With the usual Bigside pitch not quite ready for use after being converted to a hybrid playing surface, the game was played on the adjacent field. Conditions were dry with a gentle westerly breeze as Sedbergh kicked off, Whitgift clearing to touch. With their tall No 8 Braemar Murray winning possession from the line-out, the ball was moved through the hands, long-striding inside centre Ben Redshaw making ground on the right, and Whitgift were penalised, but fly-half Will Roué’s long-range kick from the tee drifted just wide.

When Sedbergh conceded successive penalties following the drop-out, Whitgift were able to set up an attacking line-out in the left corner. With possession won, although the ensuing maul was stopped successive drives by the forwards took the ball over the line, but it was held up so, with advantage being played, play came back for another penalty. This time the forward pressure delivered a score, with Captain Seb Driscoll grounding the ball. Flatley’s touchline conversion kick was beautifully judged.

When Sedbergh were penalised at a scrum, Flatley had the chance to extend the lead but his long-range kick at goal struck the post and stayed out. The loose ball was collected by tall flanker Xander Clarke and Sedbergh cleared to halfway. A handling error gave the Northern side possession back at the scrum and play taken into the Whitgift half. Although the home side won line-out ball they were forced back into their 22 and conceded a penalty. This time Sedbergh elected to kick to the corner and possession from the resulting lineout was put through the hands into midfield where outside centre and Italy international Nicola Bozzo carried strongly. With the defence drawn in, space was created on the left and quick passes found Renshaw who squeezed in at the corner. Roué’s conversion attempt struck the post and fell wide.

Whitgift gained good field position following the restart when Will Wootton’s box kick was taken by the breeze beyond the dead ball line and when Sedbergh were penalised in midfield Flatley was on target from the tee to extend his side’s lead to five points. The momentum continued to be with the home side when Sedbergh were penalised and a quickly taken tap by scrum-half Seb Pilkington was followed up and recycled by the forwards before being released to Flatley who showed great pace to step past several defenders on the left but was pushed into touch just short of the line. Again, Murray was solid at the ensuing defensive lineout and Wootton cleared to halfway.

Although a Sedbergh handling error gave Whitgift the put-in at a scrum, a big shove by the heavy Sedbergh pack forced a penalty, kicked to touch on the left. With possession won, play was switched to the right with Redshaw combining effectively with full back Josh Harbour. He was stopped by a tackle that drew approval from some Whitgift supporters, but the Referee awarded a penalty, which was taken quickly and forward pressure took play close to the line before the ball was moved through the hands to the left where Bozzo crashed over in the corner, Roué finding an excellent kick to add the extras.

With five minutes left before the interval, it seemed that the onus was on the visitors to defend the newly established narrow lead, a task that looked easier when the restart did not go ten metres and Redshaw carried strongly from the resulting scrum, but Sedbergh were penalised. Flatley’s kick from hands did not find touch but it was fumbled by the Sedbergh defence, giving Whitgift an attacking scrum on the 22. A pick-up at the base by Mikey Crump saw the No 8 move the ball to the backs in midfield and the Sedbergh line under threat, but the ball was brilliantly turned over by Murray who stretched his legs to run to halfway before offloading the Roué. The fly-half shrugged off a tackle before sprinting clear to score in the corner. Although he was unable to add the conversion, the look of the score line had been changed completely in a half where the home side had arguably had the better of territory and possession.

It looked as if Whitgift would recover momentum when Sedbergh conceded successive penalties after the restart, Flatley taking three points from the tee from the second of those. However, their revival was short-lived when Sedbergh regained possession and Redshaw put powerfully built right-wing Luke Parry into space. Although he was finally stopped, possession was retained and play taken up to the line, but the Referee judged that the ball had been held up, giving Whitgift a drop-out from their goal line.

The clearance kick was run back by Sedbergh whose offloading game was now beginning to threaten, Clarke and Murray combining effectively. However, it was the home side that had the next scoring chance when they won an attacking lineout on the right and successive penalties conceded by Sedbergh saw the referee show yellow, but once again good work by the Sedbergh back row relieved the pressure despite the numerical disadvantage.

A penalty conceded on halfway gave Sedbergh the chance to gain good field position and although a handling error gave possession back to Whitgift pressure was maintained and excellent handling put Redshaw into space on the left. Despite an acrobatic attempt to ground the ball in the corner, the centre was forced into touch. Whitgift did well to secure the lineout ball and clear, but their kick was run back by Parry and, with Sedbergh back to 15 players, more excellent offloading took play up to the line where Ellam forced his way over close to the posts, Roué converting.

Things continued to go badly for the home side when the restart kick went straight out and first phase possession from the resulting scrum found Bozzo in space on the right and he sprinted clear to score under the posts with Roué again adding the extras. Sedbergh however found themselves on the back foot when they were penalised after the restart and an attacking lineout in the left corner seemed likely to bring a score, but Sedbergh were able to clear from a drop-out.

After an exchange of kicks, Sedbergh regained field position and although a clearance kick was made it was again returned with interest by Bozzo as he raced in for his third try by the posts. Frustration was taking its toll on the home side’s discipline and it was their turn to be reduced to 14 players with the additional punishment of a penalty at the restart. Sedbergh exploited that to the full, winning a lineout on the right and Ellam peeling off the tail to crash over for his second try. The one-way traffic continued from the restart as time ran out, Bozzo making ground on the left before releasing replacement wing Finn Kelleher who sprinted clear to score under the posts.

Looking at the score line one struggled to put a finger on how we had gone from a four-point game shortly after halftime to seeing 35 unanswered points to Sedbergh by the end of the game. To an extent, it was that Sedbergh’s style of play with its emphasis on quick and skilful handling gradually got a grip on the game. Bozzo with his hat-trick of tries obviously caught the attention, but Clarke and Kelleher were also outstanding, and Redshaw, still an U17, looks like a fine prospect. With the 50% rule in place the overall strength of their squad arguably also was a factor. As has often been shown at Rosslyn Park, Sedbergh’s fitness levels are always excellent. Their block fixture vs Wellington at Broadstreet next month will as ever be a feal feast of school rugby.

Whitgift should reflect on the fact that this was a close contest for over half the game. Four at least of the Sedbergh tries came within a couple of minutes of either halftime or the final whistle. If Flatley had been able to squeeze in at the corner in the first half, the momentum could have been different. They remain a strong side and will still be one of the teams to beat in the National U18 Cup.