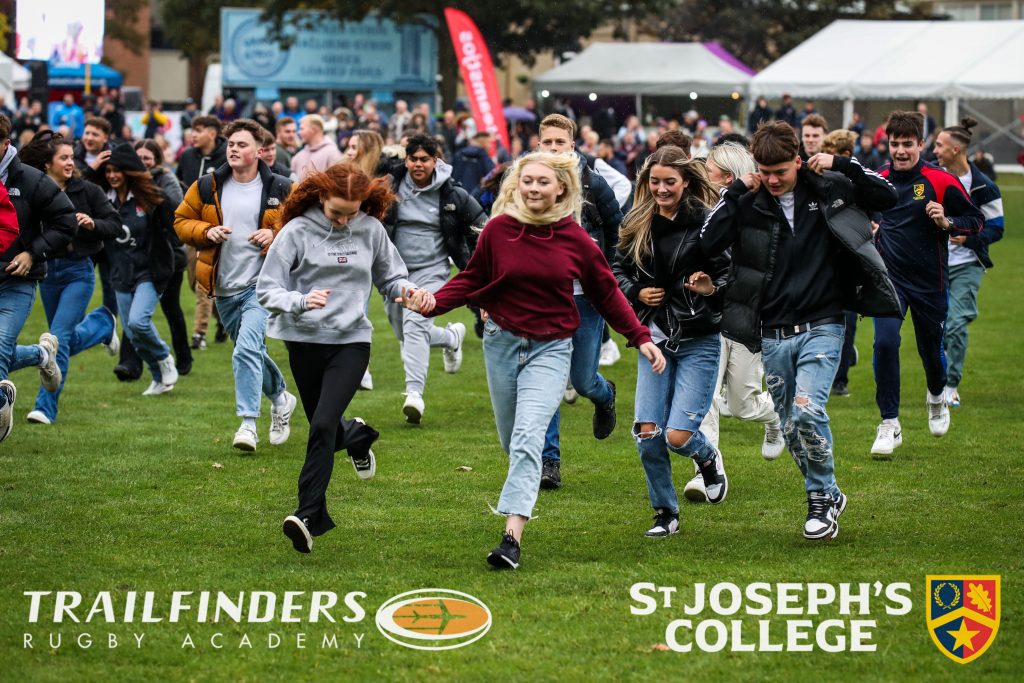 With the dust now settled on the 2021 St Joseph’s Festival reflections begin on this epic 35th edition of the tournament.

Two years on from the last Festival back in 2019, the overriding sense was at the sheer joy of being back, of having schools rugby events such as these back on the calendar, of things being so competitive, and ultimately of a new sense of even greater appreciation for such competitions.

In the same breath, by the end it was as if little had changed, there might have been a new format and new innovations, but when the fat lady got the vocal chords warmed up, it was that most familiar of shirts that was holding the De La Salle Trophy aloft, the red, green, and blue of Millfield School.

It was a record 7th title for them, leaving them alone at the top of the all-time table. Throughout the two days they stuck to their DNA and played everything from everywhere, thrilling with some of their rugby. King’s Worcester were unfortunate to meet a points chasing Millfield at the end of the opening day of their debut Festival, it probably is not a 25 minutes they would want to re-live too often, but there is rarely a more exciting sight in school rugby than Millfield on a points chase, 33 they ended up with in that 25 minute spell. With shorter games under the new format than previous years, they were one of the few still able to show that attacking verve.

What of that new format? It felt like overall it was a success, the opening day was as opening days have long been but the knockout rounds on day two brought real jeopardy and drama, and added extra excitement with the fact that additional tiers meant four finals.

The only real criticism would be that 20 minutes is just a bit too short on Day 2, resulting in too many draws and maybe not enough chances for players and teams to show their attacking quality. However there is little the organisers can do about that, it is an RFU directive to do with the amount of minutes played over a weekend – that extra fifteen minutes (cumulatively) over the three games to create 25 minute matches proving an insurmountable obstacle.

The organisers pre-empted the likely impact of this though, anticipating more draws and therefore the need for a better method of breaking the deadlock than the RFU’s go-to option of awarding victory to the first side to score. A method, by the way that exists solely because of a stat that 70% of sides that score first usually win…forgetting that fact that the winning side will score second more often, third more often, and fourth more often too, because, well, the winning side, by definition, scores more often.

The solution was penalty shoot-outs, and what a dramatic and gripping addition they proved to be. There were three in total, two actually involved the hosts, and all had the crowd in complete silence, gripped by the drama. There may be tweaks going forward, perhaps adding a greater degree of difficulty to speed the process along a bit but, though they created pressure and no little heartbreak, they were a roaring success.

Those crowds, by the way, how good it felt to be among them. It felt at points as though numbers had crept into four figures, but it was more about the passion, the emotion, and the energy on the touchlines. Sometimes at the Festival it can feel as if everyone there is a St Joseph’s fan, this year the home passion was there in abundance but it felt as though there was a huge throng of supporters for each and every game. Perhaps the fact that every team had something to play for right until the end had something to do with that.

Whatever the reason, it helped confirm a thought that had been bubbling ever since the disbanding of the Champions Trophy; the St Joseph’s Festival has become the premier fifteen-a-side schools rugby tournament in the country.

It is not the top 16 sides in the country, clearly, but few could argue that of, say, the top ten in the country, about half attend the St Joseph’s Festival. No other fifteen-a-side tournament has that claim. The Schools Cup has a stronger look than it has for years this season, but the very best in the business are not there and it is littered with byes. The St Joseph’s Festival is a gruelling test, both in terms of the intensity of schedule but also the quality and intensity of opposition.

Most importantly though, it feels special from start to finish. Every game is played in front of a huge crowd, the organisers have genuine enthusiasm for it. Whether they have a good side or a less good side, the staff at St Joseph’s College want to create the best possible weekend for all involved and that shows. Throw in the passion and emotion that the school and all close to the school have on it, and it seems to seep through to the other teams, who pick up on that emotion and start to feed it into their own attitudes and performances.

After two long years, those are the parts that one picks up on that perhaps were taken for granted in years gone by.

It leads to a thought, perhaps Festivals are the future of school competition. They offer real and genuine competition, a chance to play a range of different sides that each school might not ordinarily get to play, and they also offer a great opportunity to build those friendships and that camaraderie that are so much a part of rugby culture. Over the course of a weekend there are so many shared stories and experiences, and perhaps were teams all to stay at the same venues there might be even more opportunity for that.

Whether or not that idea is expanded upon, what will remain certain is that the 2021 St Joseph’s Festival was a welcome and joyous return. In the likes of Zach Carr, Sam Harris, Finn Tawse, Tom Lee, Connor Cross, Joe Denmark, and player of the tournament Jonny Smith, to name just a few, we saw some outstanding individual performances, and from Millfield, to Brighton College, to Kirkham Grammar School, Wellington College, Denstone, and Dulwich, among others, some incredible collective efforts.

It was a most welcome return, bigger and better than memory even recalled of an event that was already held by the NextGenXV team in such high regard.

And, in a slightly self-indulgent moment, it was such a pleasure to be able to give so many aspiring youngsters the chance to work on the mic, either as lead commentators or the many who stepped in on co-commentary, behind the camera, and in the production team for the live stream. It is a huge part of our aim not just to showcase school rugby and all it has to offer, but also to give opportunities to young men and women who are interested in working in all of those various areas – and if there any pupils at your school that have such ambitions, please do not hesitate to get in touch.