SA Under 20 Championship: Team of the Tournament 2021 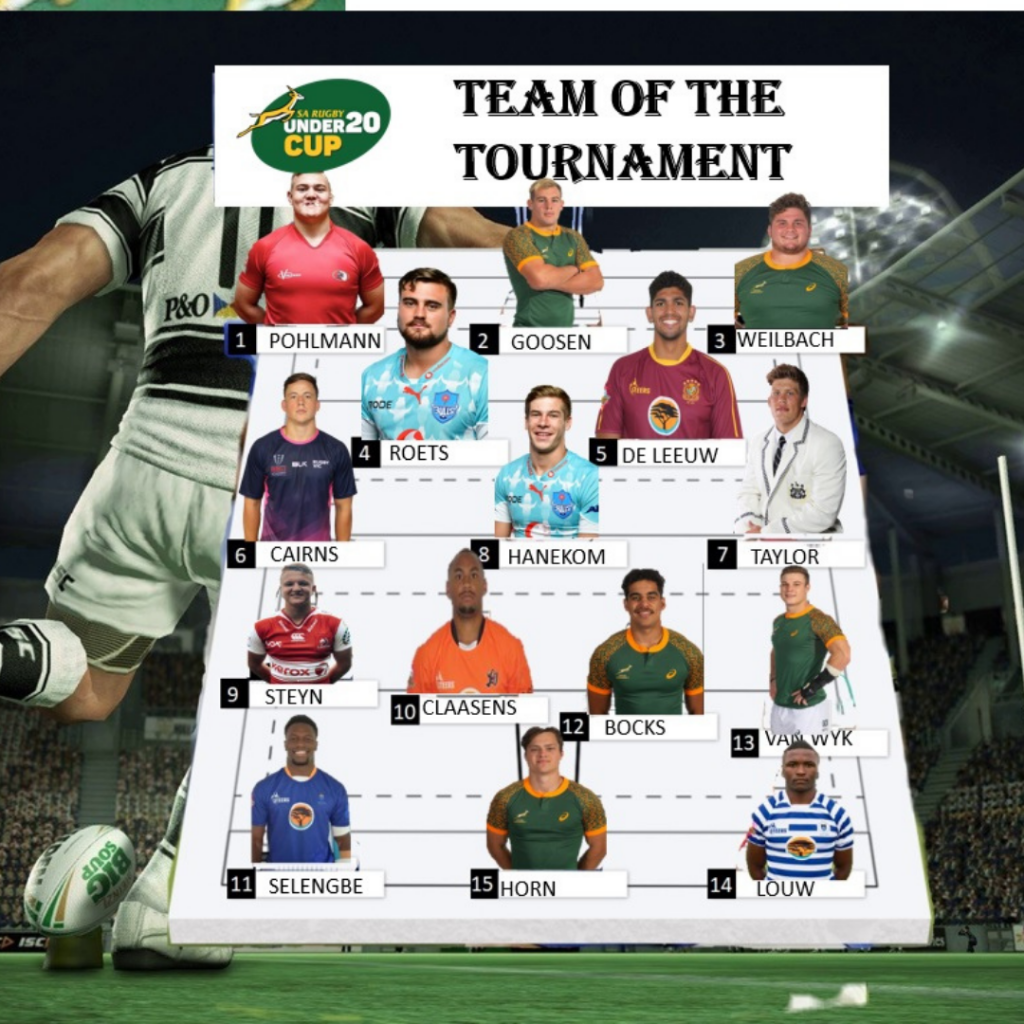 We felt that we owed it not only to the players but the public as well to recognize the achievements of our best and brightest at age group level. Unfortunately most of the games were not available to the public via streaming and thus we freely admit this may not be the most accurate Team of the Season.

We have relied on stats provided on SA Rugby’s website as well as observations on the few games we were able to watch and finally we reached out to many who were present at the games themselves who gave us what we felt were most unbiased opinions.

Quan was a highly promising centre in his school days, Bafana Nhleko’s decision to move him to fullback has been more than justified with some outstanding outings for the SA Under 20 side and being a key player in the Lions victorious campaign this year.

It has been a fantastic year for Quan and we are left in little doubt that he will make the step up to senior rugby with relative ease, an exciting future awaits the former Paarl Boys star.

While Horn showcased his ability in the Baby Bok jersey Louw made the nation take notice with some outstanding performances in the Varsity Cup. Named in the team of the tournament for the tournament it made sense that he would carry that form into the Under 20 competition.

Just what the heck does Henco have to do for the Lions to draft him into the senior squad? We have spoke about this young talent for many years now and despite an injury many thought would keep him out for the season Van Wyk only missed 2 fixtures and was a vital cog in the Lions machine.

He oozes quality and stood out for a weak Wits side in the Varsity Cup and had a exceptional outings in the Baby Boks shirt, a player that is going to become a household name in the near future.

Another school prodigy come right Tyler has not only grown in confidence as a player, he has become a general and deservingly lifted this years trophy.

His upper body strength has gone through the roof since his school days and he puts his body on the line without thinking twice, the ultimate team man. Perhaps Bocks can become the heir apparent of the DDA throne? Time will tell but judging on this years performances don’t bet against it.

Get hold of someone from home affairs and get this man his Green Mamba, its not a question if he wears the green and gold one day but rather when? Right now his versatility is an asset, capable of playing on the wing and as a centre he filled the gaping hole left by Henco’s injury by covering the outside berth but put in some stellar performances on the wing as well. Like Henco he also had a great varsity cup campaign despite playing for a weak Wits side.

Is there anything this man cannot do? An exceptional scrumhalf at school level Claasens did the double playing SA Schools 2018 and 2019. The move to flyhalf was somewhat of a headscratcher as first, especially being such a dominant player at school but Claasens showcased his credentials and then some.

Stellar performances in the Varsity Cup for UJ, a side who were one of the weaker teams this year showed that whether it was a dominant or weak pack in front of him mattered not, he knows how to control the flow of the game and is an invaluable asset to any team that is lucky enough to have him.

130 points in this years tournament shows the threat he possesses. A few years ago the depth at flyhalf was a concern, but we are at the stage now where I believe that the flyhalf position is going to be a selectors worst nightmare. Claassens, Mngomezulu, Hendrikse, Wolhuter, Smith, Von Ludwig and Koen are all Under 20 players – good luck with that!

What a year it has been for Nico Steyn. Despite having no rugby in 2020 a year where he was expected to make the SA Schools jersey his own he approached the 2021 season with the same mentality that has served him so well during his school days and played with maturity way beyond his years.

A debut try for the Baby Boks set the wheels in motion and everyone has been incredibly impressed by his performances thus far, a player we believe is already able to make the step up to senior rugby. Remember the name!

It says all you need to know about Cammy Hanekom that despite having both Hardus Rothman and Willie Potgieter two exceptional number 8’s on the books that Hanekom was a starter in all but one of the Bulls fixtures.

A powerful yet mobile ball carrier it is clear that Hanekom has only grown in stature and ability since leaving Booishaai and we are certain he will be a key player not only for the Bulls over the next few years but for the Baby Boks as well.

After leaving the Baby Boks training camp earlier this year rumours were rife about issues surrounding Taylor and his future in rugby. Jarrod lay those rumours to rest by showing that he is one of the best young loose forwards in the country right now and that his focus is still on the game he loves.

Jarrod combines brute strength and aggression with a very underrated rugby IQ, I mentioned at school level if he learns to use his natural aggression as a force for good on the field of play he would become unstoppable. He matured into a fine young rugby player and his path to the top continues.

What a whirlwind few years it has been for Cairns. Initially slated for a career in Australia he made the trip home where it looked like he would be behind the pecking order in what remains an extremely competitive loose forward department at the Lions.

A few injuries to key players and Cairns seized the opportunity with both hands putting in some solid workman displays. An 8th man at school level the move to blindside appears to suit his playing style well and perhaps a future in the senior setup will come sooner rather than later?

At school level Dylan’s talent was evident to anyone, the one thing that was lacking was work rate if we are to be brutally honest. A player of his stature and ability is able to rely on natural talent alone and get away with it against weaker teams but when playing teams of higher quality often such talents are left exposed.

Come 2021 and all that has changed, De Leeuw has not only shown himself to be a hard worker he has combined that with a leadership role in which he almost led a unfancied Western Province team to the national title. If Dylan continues on this path a massive future awaits him, a stoic like work ethic combined with his god given talent is something special.

There was much expectation placed upon the Bulls this year, having recruited heavily and possessing a fantastic coach in Wessel du Plessis as well as depth in abundance the team fell short on expectations this year but there were some players who put their hands up and among those were Raynard Roets.

A traditional powerhouse lock he stands back for no man and is extremely physical but is mature enough to not let the game get to his head and is incredibly composed. The next few years will be vital for his development but if the 2021 season is anything to go by then we are confident a solid future awaits him.

Pottie Weilbach was a certainty to many for SA Schools in 2020, a leak list contained his name on it and not many were shocked by that.

Fast forward to 2021 and despite a year of no rugby he was selected to the Baby Boks squad, a team that would face ferocious front rankers from South America and Georgia. Weilbach was immense to say the least, the Baby Bok scrum was under severe pressure on many occasions but Pottie more than held his own and has made the Junior Bok jersey his own, a tremendous fight awaits anyone who tries to take it off him.

One half of the Selborne College Bash Brother duo Goosen was an absolute unit at school level running over defenders and putting in some bone crushing tackles along the way.

A year with no rugby meant a year cost of his development but after some fantastic displays for the Baby Boks especially in the number 6 jersey many including this author felt that perhaps the blindside flank role would be his best bet in the future.

Goosen has always had detractors, a player this immense always does but he kept mouths shut in this years Under 20 tournament finishing the leading try scorer despite playing for a Sharks team that despite all its talent disappointed.

It is going to be a very interesting few years for Jacques, but bet against him at your peril.

First head scratcher of the season was why Heiko was on the bench for the first game of the season? In our mind there are fewer better tightheads in the country.

Second head scratcher was why the heck are they playing him at loosehead? Because they can!

Heiko has been immense, we rated him as one of the Top 15 prospects in the country in 2020 and felt that despite switching positions this year he more than justified our belief in him. He is Lions to the core, the family are massive supporters and he is where he needs to be and wants to be – a luxury afforded to few rugby players.

I think the public are going to be shocked at how quickly he develops in the next few years, a truly special player that was a vital cog in the Lions engine room for 2021.