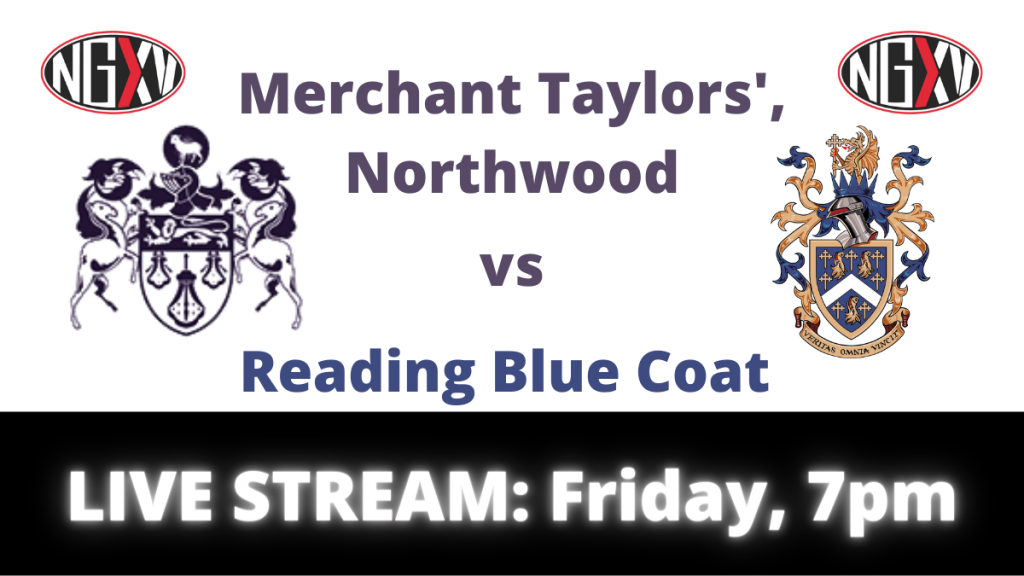 The game kicks off at 7pm, and you will be able to watch it below and on our YouTube channel as this superb week of action at Merchant Taylors’ Northwood comes to an end.

Every year Merchant Taylors’ host a rugby week, and this year feels bigger than ever. On Monday Merchant Taylors’ Prep played against York House in a competitive match with some great rugby played by all, while the U13 As played against Chesham Prep. This is a mixture of their Year 7 and 8 players so they had a squad of 19. It was a back and forth match which ended up finishing 45-45 with tries by Lasen de Silva (3), Nathan Bridge (4), Xhennuo Wang and Lum Emini.

The U15 As then put in an outstanding performance against Mill Hill. Having lost 21-19 in the Cup the previous week, MTS brought huge intensity and controlled much of the game to win 19-0. It featured a Man of the Match performance by James Steven-Jennings who was playing his first game in the back row (previously a 15) whilst Anthony Poole (centre) and Georgios Kyriakou were a constant threat too. Meanwhile the U15 Bs played in a round robin with Reading Blue Coat and Mill Hill, and the U15 Cs played out a really close, high scoring game with Mill Hil.

Tuesday was all about the U14s, The U14 A triangular saw MTS defeat Mill Hill 14-0, followed by Reading Blue Coat winning 21-5 against Mill Hill. The final game of the night saw MTS recover from 17-0 down to win 21-17, inspired by Ben Perahia. The U14 B triangular then saw Reading Blue Coat win both games, concluding with a 10-5 win against MTS, while the U14 C game was an awesome, end to end game that finished 20-5 to MTS. Theo Hawkes and Antoni Hawkins were excellent. There was a competitive touch game against Mill Hill for the U14 Ds, while the U14 Touch A side won an excellent game of Taylors’ Tens against Mill Hill. The game saw some exciting ‘Kick to Score’ tries with superb performances by Aqil Karawalli and Hari Kalsi. Meanwhile there was also a game between Longdean and St Helen’s, who played a closely fought match with Longdean, boasting a number of girls who play for Fullerians, victorious.

Wednesday then saw the U16s take over, the U16 A triangular saw Skinners defeat Mill Hill 14-0, before MTS survived an onslaught from Skinners to win 7-5. The final game was broken open by the try of the week as Ollie Browne beat multiple players to run from the half way line in a 12-0 win, meanwhile the Merchant Taylors’ U16 B and Reading Blue Coat sides played out a superb game on Pitch 2 with some very fast rugby despite the conditions.

The Merchant Taylors’ Young Samurai side (L6th/2nd XV) took on Shiplake 2s. Shiplake took a 7-0 lead following an intercept by their fly half but were pegged back when prop Adam Knowles barrelled over from close range. A conversion by Max Witt made it 7-7. Shiplake scored a penalty in a scrappy but intense contest before MTS applied some pressure. A break by Finn Combe allowed him to offload to Ari Moneke who picked the ball up off his boot laces to score in the corner and give MTS a 12-10 lead. The home side defended on their try line for the last 5 minutes, down to 14 but just about held on for the win.

Thursday is a community night, with local clubs coming in to train at U16, U14, and U13 levels, before the week draws to a close with a huge Friday night programme. Early on the evening various ‘Barbarians’ sides at U9, U10, and U11 levels. These are combination sides from Merchant Taylors’ partner schools, affording each participant the chance to play under the floodlights, experience the school, and be a part of the magic of rugby week.

Following the conclusion of the Barbarians games, the U6th ‘Sensei’ team will face Reading Blue Coat 2nd XV on Pitch 2, while on Pitch 1 we will be live streaming the 1st XV game between Merchant Taylors’ and Reading Blue Coat.

The live stream should be a cracking game, Reading Blue Coat are having a top season. Only Abingdon and Bishop Wordsworth’s have beaten them and both of those by just a handful of points. They have won seven and drawn one of their other eight games, including a run to the Regional Final in the Schools Vase, a place they confirmed on Wednesday with a 14-10 victory over Dauntsey’s.

Merchant Taylors’ have also been in flying form though, with skipper Harry Bridgewater leading an exciting and mobile side from fly half. In lieutenants Daniel Odejinmi at full back and Enrico Caricati-Barreiros, he has two able deputies that have helped the side to big victories over the likes of Watford Grammar and UCS, and indeed away at Magdalen College on Saturday where they led the school into rugby week with a spring in its step thanks to a 32-7 victory.

Merchant Taylors’ have won the last four meetings between these sides at 1st XV level, and at U15 level in 2019 and 2018 they beat Reading Blue Coat 10-8 and 24-19, the sides that played in those games represent the current U6th and L6th at each school.

What that suggests is that we have an incredibly close game on our hands on Friday night, one that should thrill under the lights and in front of the cameras. It’s not to be missed!