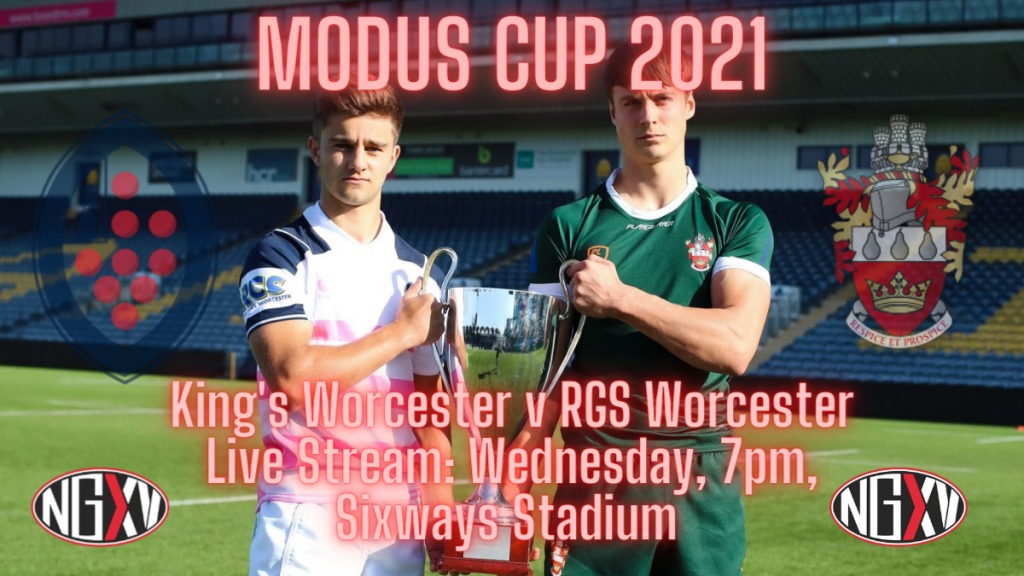 It is the 14th Annual Modus Cup, the challenge between local rivals King’s School, Worcester Worcester and Royal Grammar School, Worcester, and there is an expected crowd of 4,000 at the Gallagher Premiership club’s superb stadium.

The stream will be part of a bumper evening here at NextGenXV as we will also be live streaming the U18 Schools Cup 3rd Round Clash between Berkhamsted and Seaford College. The Modus Cup kicks off at 7pm and the Schools Cup at 7.30pm but both will be live in full on our YouTube channel and embedded here in the website.

At Sixways the Modus Cup will be a spectacular occasion, in the 13 previous years of Modus Cup, King’s Worcester have won 8 and RGS Worcester 5, King’s are the current holders after they won the 2019 edition 22-7. RGS had won the previous two though and will be eager to get back the Cup on Wednesday night.

Both sides arrive with similar form this season, King’s have played 7, won 5, and lost 2, as well as a run at the St Joseph’s Festival that saw them reach the Bowl final. RGS have meanwhile played 10, won 7, and lost 3.

It suggests an even contest, maybe with RGS just having the edge – though that is based on their one common opponent, Malvern College, whom RGS beat 45-0 and King’s beat 27-0, but even that suggests little difference, and any difference is perhaps offset by King’s experience in the pressure cooker that is the St Joseph’s Festival, and with so many likely to be in attendance on Wednesday it will likely be high pressure too.

Either way though, despite the local bragging rights and the desire to do well on the pitch, the Modus Cup represents, as always, a fantastic opportunity for all of these players, their families, and the school communities as a whole to experience playing at such a level and such an intensity, and an occasion that none will ever forget.

After a year’s absence, that will feel all the more poignant on Wednesday night.