Schools Cup: Whitgift progress in U15 Cup with impressive victory over St John’s 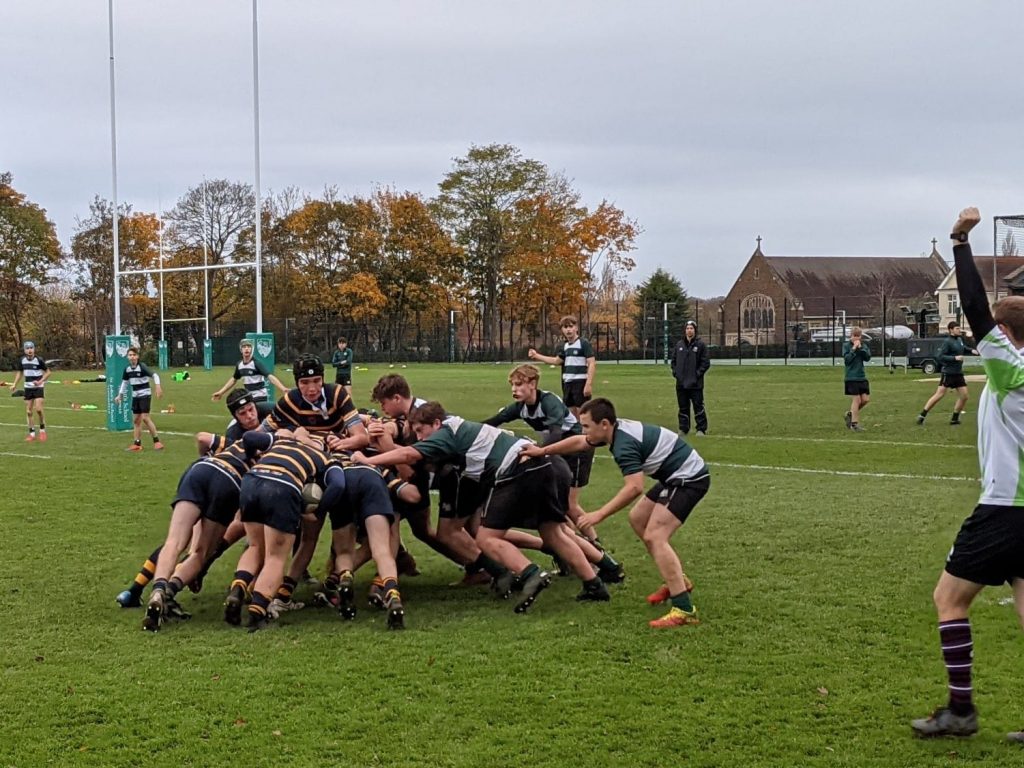 Whitgift School U15s emulated the previous week’s performance by their U18 colleagues with a 35-6 win over St John’s School, Leatherhead

Whitgift have a fine record in this competition over the years, winning three times, most recently in 2018. This season’s side had made a solid start to the term with the only blemishes on a winning record being narrow losses to perennial rivals Wellington and Harrow, together with, more surprisingly, a defeat by Chislehurst & Sidcup. St John’s had (with the final at Twickenham cancelled due to the pandemic) been joint winners of the U15 Vase in 2020, so it is good to see them competing in the Cup.

Although the morning sunshine in Surrey had given way to cloudy skies, mild temperatures and a firm playing surface on the 1st XV pitch promised some open rugby. After St John’s had kicked off, the opening minutes were played in the Whitgift half and good line speed saw them force a penalty. That was kicked to touch on the left inside the 22 and with U14 rules being played until after Christmas possession from the ensuing uncontested line-out was guaranteed but after some initial progress, a handling error gave possession back to Whitgift.

It was then the visitors’ turn to force a penalty and when the maul, set up from the resulting line-out, was illegally stopped a second penalty was kicked to the right corner. After a maul had formed, prop Louis Johnson broke away on the blindside and dived over to score in the corner. He then added the extras himself with an excellent kick from the touchline.

Whitgift exited the restart safely with a good clearance kick, but following the subsequent lineout they were penalised twice, giving St John’s the chance to gain field position. However, Whitgift were able to recover and take play deep into the St John’s half on the right and after good offloading pressure by the forwards resulted in a try in the corner for hooker Zeb Winterbottom. Johnson’s touchline conversion attempt was again well struck but narrowly missed.

The restart was run back on the left by wing Jack MacLean and after possession had been retained in midfield the left-wing was put into space again and stepped his way close to the line. When the defence were penalised and possession secured from the ensuing line-out, Johnson carried to the line but was held up, giving Whitgift a 5m scrum (no goal-line drop-outs at U15). No 8 Noah Screene picked up from the base and drove over to score on the left. The right-footed fly-half Sebastian Cox took over kicking duties to add the conversion.

Following the interval, successive penalties conceded by Whitgift gave St John’s possession on the 22 and driving by their forwards, prop Baxter S making some hard yards, maintained the pressure and finally an attacking line-out was awarded to the home side, with flanker Tommy M. breaking away and diving over on the left. The conversion attempt by scrum-half Max M. was not successful, but they were at last on the scoreboard.

After an exchange of kicks Whitgift won a penalty and kicked to the right corner and a driving maul was set up with Johnson carrying the ball at the back. A score seemed likely, but the mail was stopped and when the ball was moved through the hands to the left the final pass went astray. St John’s won the resulting scrum but when they tried to run out of defence, they lost possession and the turnover ball was moved quickly to the right where an overlap was created for replacement wing Jasper Abington who scored in the corner. Johnson produced another excellent kick from the tee to convert from the touchline.

Strong carrying by the St John’s forwards with Baxter S. once again to the fore after the restart forced Whitgift to concede a penalty, kicked to the left corner. Although Whitgift briefly cleared, two more penalties in quick succession took St John’s back into the 22 and their inside centre carried from a tapped penalty close to the line, but the defence forced a turnover and scrum-half Fergus Callington kicked clear. With the pressure relieved, Screene showed excellent pace to breakthrough tackles on the left and the No 8 offloaded to wing Thomas Williams who scored in the corner to complete the scoring.

Whitgift will have a long journey to Somerset for their block fixture with Millfield and will thereafter host the winners of the Lord Wandsworth vs RGS Guildford tie.