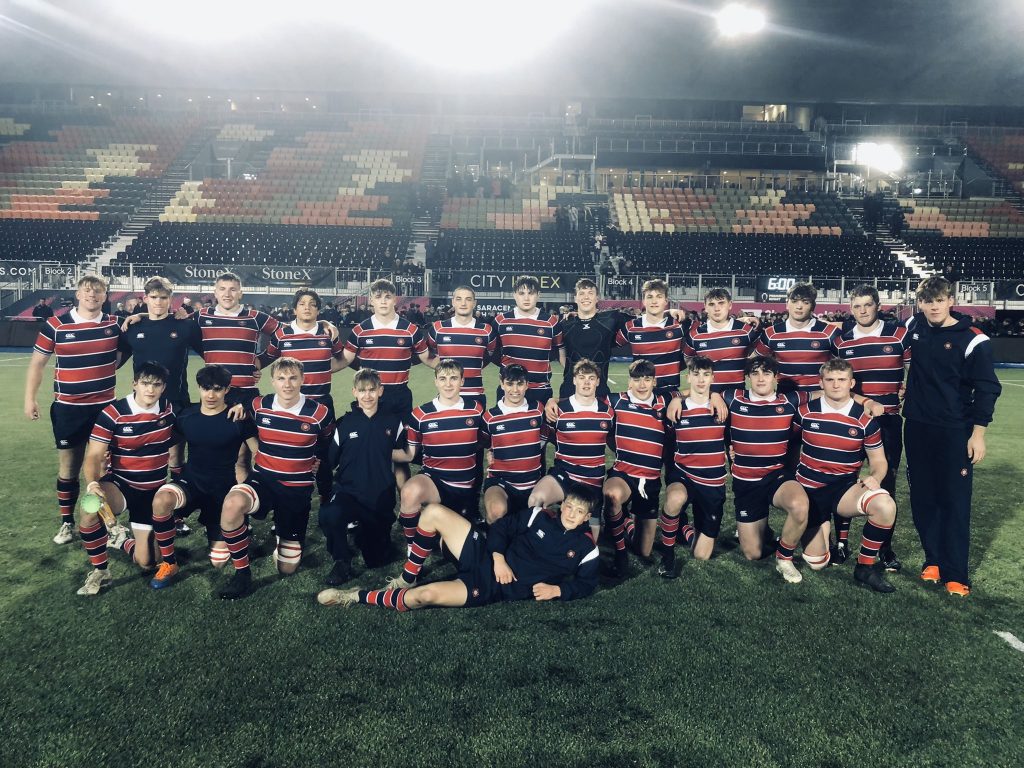 It has been a huge midweek of schools rugby with games across the knockout competitions as well as plenty of regular season fixtures as sides looked to get their games in before a rest weekend for many.

A lot of the big boarding schools have an exeat weekend and therefore packed the fixture list with games in midweek, leaving the weekend lower on fixtures but still with plenty of quality, as you can see in our weekend preview.

Throughout the week that made for some absolutely fantastic encounters both in and out of-knockout, and sets the tone for a blockbuster final few weeks of the term.

Sadly the big Schools Cup game between Bedford and Royal Hospital School was postponed, however there was still action in the Schools Plate, where Norwich booked their place in the Midlands B Regional Final thanks to a 20-12 defeat of Finborough, they will now host former Cup champions Campion in that Regional Final.

Perhaps the biggest game of the day though was between Ipswich and Kirkham Grammar School. Ipswich are one of the rising stars of the school game while Kirkham have been one of the top sides around for years. Both sides went into the game unbeaten, for Ipswich it was a chance to prove they were among the big boys now, for Kirkham a massive game and an opportunity to stamp down a bit of authority. In the end, both achieved those aims. Kirkham Grammar School won the game 13-10, but in keeping it so close and performing so well, Ipswich proved that they belong in the upper echelons. A truly seismic day in schools rugby terms.

Elsewhere, Woodbridge also won a narrow game on Tuesday, edging out King’s Ely 8-6, while in Cambridge things were even close as The Leys and Cambridge Vipers held each other to a 19-19 draw. Meanwhile in London, Eltham College were on song for a 19-14 victory over Beth’s Grammar.

Wednesday was a massive day, and one that included two live streams here at NextGenXV. One of which took in a key Schools Cup game at Saracens’ StoneX Stadium as Berkhamsted and Seaford College went head to head in the South West B regional semi final. It was a magnificent occasion but Berkhamsted’s ruthless defence and clinical counter-attacking, epitomised by the peerless Tobias Elliott in the centres, took them to a 31-8 victory, setting up a South West B regional final away at Monmouth. In doing so, Berkhamsted once again demonstrated that they are one of the top sides in the country, and retained their unbeaten record. They could well be one of the favourites for this competition.

In South West A, meanwhile, Sherborne mounted an epic comeback at Ivybridge Community College to reach the Regional Final. 17-7 down at half time on a tough pitch that Ivybridge well playing to perfection, their fly half’s kicking game was on fire, Sherborne turned the game around in the second half to seal a 22-20 victory and a home tie against Canford in the regional final.

The Schools Vase also saw plenty of action on Wednesday, North B saw Mount St Mary’s College absolutely storm into the regional final with a stunning 43-7 victory over Trent College. They will now travel to Harrogate Grammar to play for a spot in the national quarter finals.

In Midlands A Bishop Vesey’s Grammar and Coventry College played out an absolute thriller of a game. The points came raining in but it was the away side, Coventry College, that held the upper hand and sealed yet another impressive victory to win 37-27, sealing a place in the Regional Final where they will play either Oundle or The Perse.

Over in Midlands B Aylesbury Grammar were in sensational form as they travelled to St Columba’s College and secured an outstanding 46-17 victory. They now head to the regional final, where they will travel to the impressive Ipswich School.

London & South East B is going to have a really interesting regional final after Skinners’, who have been so utterly brilliant this season, put in an epic second half display against Brentwood. Skinners’ led narrowly, 26-24 early in the second half, only to suddenly fly off the leash as they rained in the trys for a spectacular 52-24 victory. They will host another high-flyer in the regional final, Sutton Valence, in what could be an incredible spectacle.

Over in the Schools Bowl there were also a few games. Nottingham High School stormed to the North B regional final with a 35-0 defeat of Ratcliffe College, while in Midlands A it is KES Stratford that have booked their place in the regional final thanks to a 33-17 victory at KES Five Ways.

Arguably the biggest game of the day though was not in the knockout competitions but was in fact in front of the NextGenXV live stream cameras at Sixways Stadium for the 14th Annual Modus Cup. King’s Worcester and RGS Worcester go head to head annually and after a year’s absence due to covid there was a real anticipation ahead of this one as the supporters packed into the stadium. It was a thrilling atmosphere and a cracking game to boot, with King’s Worcester retaining their title thanks to a 39-12 victory, highlights of which you can see below.

The big games just kept on coming though, including a brilliant 20-7 victory for RGS Newcastle over Durham, one of a number of top encounters in the north of the country, where Cheadle Hulme and Lymm High put on a bit of a classic, Cheadle Hulme winning 40-32. Meanwhile Wirral Grammar beat Altrincham Grammar by an impressive 41-5 margin, Cheadle Hulme and Wirral Grammar will now meet in the Cheshire Cup final. Elsewhere Ripon Grammar were on fire at Ashville College, winning 50-0, while Manchester Grammar were equally tasty at home to Ripley St Thomas, winning 60-5. Up in Scotland Marr College and Glasgow Academy held each other to a 10-10 draw.

Wallington County Grammar continue to look impressive, on Wednesday they beat Glyn 20-0. Meanwhile Duke of York’s were in great form for a 47-7 victory at Chatham & Clarendon, while Fulham Boys stormed to a 52-12 victory over Mill Hill 2nd XV.

Hampton v Henley College was a hugely anticipated game, Hampton have been great this season but Henley College, now in partnership with Ealing Trailfinders, have been making waves. It made for a great encounter, a game that was truly in the balance but it was Hampton that just edged it, 12-11. Elsewhere Simon Langton beat St Lawrence College 26-7, while Claires Court were superb for a 50-5 win at LVS Ascot. Halliford remain fantastic, Holyport were their latest victims, 28-7.

Further West, Stourport High beat South Bromsgrove 29-7, while KES Camp Hill won a good game at home to Shrewsbury 2012. Newcastle Under Lyme beat KES Aston in a tight one, 19-14, while St Edward’s Cheltenham were in stunning form for a 60-24 defeat of Sibford.

Thursday was an incredible day, packed full of top class fixtures and we begin our roundup with the end of the day at Kingsholm Stadium, where Sir Thomas Rich’s and Cheltenham College went head to head in an absolute classic. It was a game worthy of the surrounds as both sides threw everything at it, but it was Cheltenham that just came out on top, 25-22.

Clifton College claimed some silverware on Thursday, retaining the Governor’s Cup against Marlborough College, it is the oldest schoolboy fixture in England, first played in 1864. Marlborough have been impressive of late and the first half was competitive, ending 13-10, but Clifton College are unbeaten and sealed yet another magnificent victory with a brilliant second half for a 41-10 win. It leaves them second in the Daily Mail Trophy table and two games away from an unbeaten season, with two huge fixtures against Millfield and Bromsgrove to come. In exciting news, NextGenXV will be live streaming that game between Clifton College at Millfield on Saturday 27th November, following on from Wednesday’s live stream from Broadstreet RFC of Wellington College v Sedbergh.

Harrow also had a fantastic week, their 17-5 defeat of Eton College propelled them into the Top 10 in the Daily Mail Trophy, in fact it shot them all the way up to 5th. They are also flying in the Cup, and have a huge regional final against Hampton next week.

Elsewhere Bryanston had plenty to celebrate on Thursday. Their 1st XV enjoyed a strong 24-7 defeat of Poole Grammar, while the 2nd XV defeated Wells Cathedral 26-12. Beechen Cliff’s 2nd XV were also on song, winning 19-13 at Monkton Combe, while King’s Bruton won a cracker against Downside, 15-12. Worth were in great form against Christ’s Hospital, winning 31-12, while The Gryphon and Ashford enjoyed identical victories over Sexey’s and Bethany respectively, 45-12.