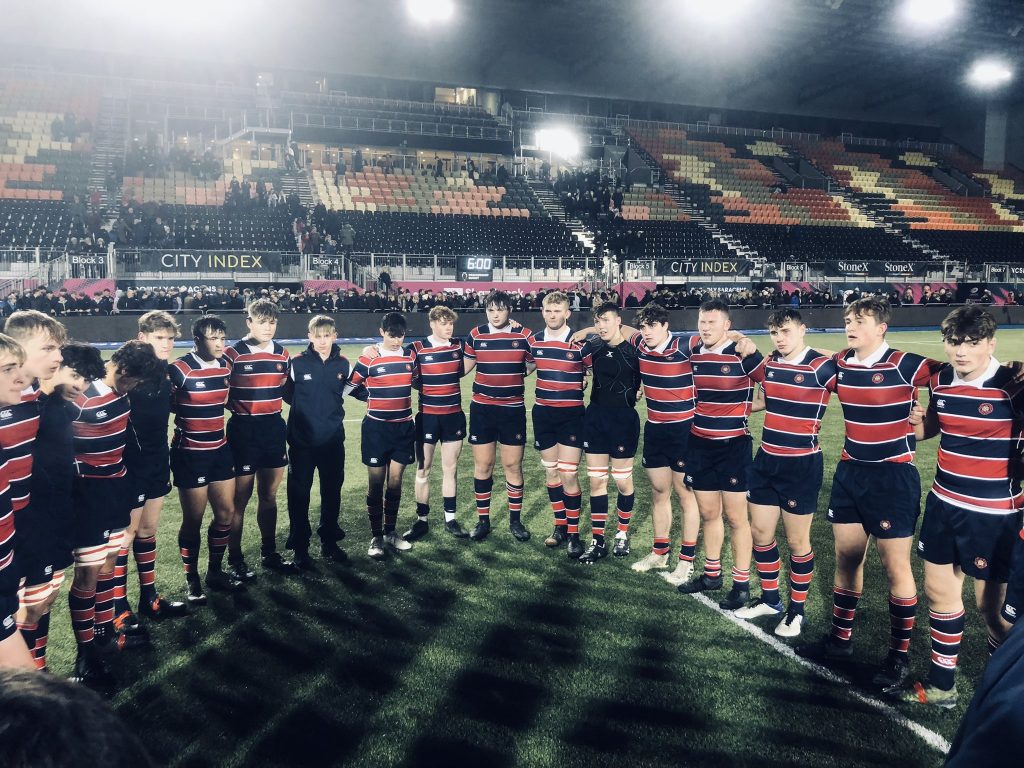 This midweek is possibly the biggest midweek on the schools rugby calendar this season as the regional finals of the Schools Cup, Plate, Vase, and Bowl begin, and some of the biggest names in the school game go head to head in fixtures that could determine the Daily Mail Trophy.

It sets the tone for the remaining weeks of the season, which will see big game after big game. After the early season joy at simply being back to playing the game, now that joy begins to morph into the joy of being at the sharp end of the season, of each game starting to feel like it really has something on the line.

Six of the eight U18 Schools Cup Regional Finals take place this week, with four of them taking place on Tuesday.

North A sees Kirkham Grammar, surely one of the favourites for the tournament as a whole, host a Cheadle Hulme side that has been playing some good rugby but will need to be at their utter best against one of the finest sides in the land.

Both Midlands sections have their regional finals on Tuesday. Midlands A sees former champions Oakham travel to 2019 Champions Trophy finalists Rugby. It’s a genuine heavyweight clash, both are playing absolutely stupendous rugby at the moment and whichever side emerges victorious will have serious belief that they can go all the way. In the B section Bedford host Felsted after Bedford’s game against Royal Hospital School in the previous round was cancelled. Both have had their ups and downs this year, but when they are on song they produce some magical rugby, which could lead to a classic.

Tuesday’s fourth game comes in South West B, where Wales’ Monmouth will continue their aim to become the first Welsh school to win the competition. They have a tricky task on their hands though, hosting the unbeaten Berkhamsted who have looked so mighty throughout this competition, included last week on our live stream of the previous round against Seaford College.

There are two games in the section on Wednesday. North B sees two powerhouses go head to head, Barnard Castle and Woodhouse Grove. These two actually played each other in front of live cameras earlier this season, Woodhouse Grove winning that one narrowly at home. This time they meet at Barnard Castle, perhaps swinging the pendulum back towards this legendary side of the Cup slightly, it promises to be a spectacular game.

The other game on Wednesday is the London & South East B regional final and what a cracker that looks set to be, a Croydon derby as Trinity, one of the most in form teams in the country, host Whitgift, the three time champions and current holders of the Cup. It is two sides that are playing right up in the higher echelons this year and it will be an absolute blockbuster.

The Schools Plate action also begins on Tuesday with the North B regional final as Grammar School at Leeds, the former Champions Trophy finalists, travel to Hartlepool 6th form College, who are having a great season. It’s a huge opportunity for both and one that both will be playing their hearts out to take.

Wednesday then sees two games, in the North A final Stonyhurst College host Stockport Grammar, two sides that have had some excellent results so far this season. Meanwhile in South West A comes arguably the tie of the competition as the most successful side in Schools Cup history, Colston’s, welcome a Marlborough College side that has really found some form in recent weeks. It ought to be a wonderful occasion.

Thursday then sees eyes turn to London & South East A where KCS Wimbledon, one of the form teams in the country before half term and a side with a real shot at the title, travel to Davenant, who will see this as a massive opportunity to do something special.

There is one game confirmed for the following week when Wimbledon College and Caterham go head to head in London & South East B on Wednesday 1st. The South West B and Midlands B finals, King’s Worcester v Henley College and Norwich v Campion respectively, are yet to have a date confirmed, while in Midlands A Stowe are already the confirmed quarter finalists after a bizarre section where most of the sides did not play.

The Schools Vase action starts on Tuesday with a catch up game from the previous round as Oundle host The Perse in Midlands A, with the winner facing Coventry College in the regional final.

On Wednesday it’s onto the meat of the week and the regional finals. North A sees Wirral Grammar School host St Anselm’s College in what should be an absolute cracker. Meanwhile in Midlands B Ipswich, a rising star of the school scene and surely a favourite for this Vase, have a tricky tie at home against Aylesbury Grammar. Meanwhile in London & South East A Mill Hill and Wallington County Grammar go head to head.

Thursday sees the attention all on South West B and Reading Blue Coat against Bryanston a huge tie and one that we will be live streaming here on NextGenXV from 2.30pm.

South West A’s regional final between Truro School and Bristol Grammar is on Wednesday 1st, while Harrogate Grammar v Mount St Mary’s in North B and Skinners’ v Sutton Valence in London & South East B are yet to be confirmed.

Thursday sees a catch up game in South West A, as Wycliffe College host King’s Gloucester, with the winner facing West Buckland in the regional final. The South West B regional final takes place on Wednesday 1st, with Cokethorpe hosting Lord Wandsworth College. The situation in North A remains a little behind.

Down in England it’s the East of the country that sees the action on Tuesday, Wymondham College host King’s Ely while New Hall travel to Bishop’s Stortford High School.

Wednesday features some huge games but surely the biggest of the lot will be under the glare of the lights and the NextGenXV cameras at Broadstreet RFC as Sedbergh and Wellington College go head to head. It is a massive game every year and often a deciding factor in the Daily Mail Trophy. That competition looks out of reach for Wellington College at the moment, narrow defeats to Millfield and Clifton College costing them, although there is still room to rise high, but that will not stop what this game means – it is the game every year and often produces such drama and spectacular play. For Sedbergh the Trophy remains very much in play, they are top of the table and with Wellington on Wednesday and Millfield in a couple of weeks it is all to play for. More to the point though, this will be their biggest test of the season to date, simply a massive game with a brilliant backdrop, live cameras, and a bumper crowd. Our live cameras will also be taking in the 2nd XV game earlier in the day, with details of both broadcasts to follow. One of Sedbergh’s other sides is, meanwhile, in action at Austin Friars.

Elsewhere the big games keep coming. After an impressive result on Saturday, Denstone College head to Worksop College. The North of England features some of the top games of the day, Ampleforth College are hosting the newly crowned Tom Burrows Cup champions, Rishworth, while Hymers College travel to Birkdale, and Lancaster RGS ,fresh from that tight win over RGS Newcastle, head to Bolton School.

Bloxham have been in such form in the last two games and will hope for more of the same on Wednesday when they host Princethorpe College. Old Swinford Hospital have a game that should be a superb occasion against Invictus Rugby Academy, while Reading and Leighton Park also go head to head. KES Camp Hill v KES Five Ways looks like being a fantastic game of rugby, while elsewhere Royal Wootton Bassett host Beechen Cliff 2nd XV.

In the South East look out for a cracking clash at Rosslyn Park FC on Wednesday evening as Emanuel and Sutton Valence go head to head, elsewhere Henley College v Duke of York’s Royal Military is one to keep an eye on.

Portsmouth Grammar head to Oaklands, while Laytmer Upper welcome Saint Cecilia’s and St James’ head to Reddam House, with Harris Academy in action at Riddlesdown Collegiate. Meanwhile Hallifordwill be eager to bounce back to winning ways away at Grey Court, while Cardinal Vaughan head to Fulham Boys and Haberdashers’ host Dr Challoner’s Grammar.

Thursday is not a busy day but it is a day with some quality fixtures, not least of with is the magnificent Stowe 1st XV heading to Dean Close who will be keen to bounce back to winning ways. In the South West KES Bath host Monkton Combe, while Milton Abbey head to Clayesmore, meanwhile in the East of the country it is Wymondham College v Gresham’s, which promises to be a good game of rugby.