School Rugby: Sedbergh and Wellington College hold each other to extraordinary draw 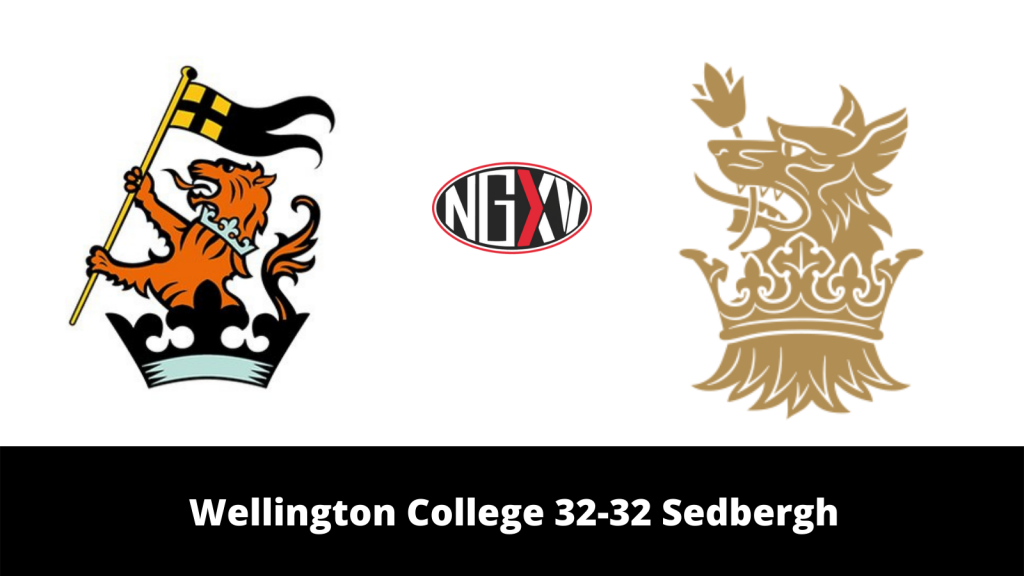 If ever there was a game to encapsulate the sheer quality and joy of schoolboy rugby, Wellington College v Sedbergh was surely it. These two top class sides holding one another to a 32-32 draw at Broadstreet RFC.

Every year this game seems to be gloriously dramatic but, after two long years since the last, 2021 will be remembered as the most dramatic of all as these two extraordinary schoolboy sides produced a game of rugby that will live on well beyond the schoolboy years of those that wore the shirts this evening.

In Will Ayton and Ben Wright each sides was led by an inspirational hooker. Both had outstanding games, and looked as though they could play at any level that they were thrown into. The battle of the number 8s, Henry Starmer-Smith and Braemar Murray, was another classic, but these match-ups were shown all over the park.

It was simple a stunning game of rugby, a showcase of everything that was good about school rugby. Wellington College led 7-3 early on, thanks to a try from Ayton, converted by the exceptional Rory Taylor, in response to an early Will Roué penalty. With Sedbergh shortly after going a man down for the rest of the game, it looked like it could be a long night ahead for the Cumbrians.

Oh how little we knew.

What followed was extraordinary, from both sides. Two sets of young men determined to give absolutely everything for their mates, the shirt, and their school in a game of rugby that began as good, and ended as jaw-dropping.

It all began with Sedbergh playing smart with 14 men and banging over a penalty through Roué, and then just became breath-taking as they surged  to a 20-7 lead with tries either side of the break, first through a sniping dart around the fringes from the outstanding William Wootton at scrum half, and then one of the most glorious tries that you will see as Wootton ripped the ball in the tackle in his own 22, releasing his full back Tom Burton, who bobbed this way and that before racing the length of the pitch to score a sublime individual try under the sticks.

Roué converted both, and it seemed at the time almost unbelievable that his side were so far ahead in the circumstances. The spirit and guts from the side, over whom he is vice-captain, was incredible.

Yet so too were Wellington College, for no sooner had the temptation arisen to start writing them off than they were to wrestle the momentum back through some clinical play by the forward pack, which allowed Finn Tawse the advantage with which to play a deft chip over the top for the ever-aware Taylor to dot down.

Taylor converted his own score and before too long he was called into action again as Wellington College conjured a brilliant try after yet more superb play from Ayton eventually led to substitute Will Springett, returning from injury with a top performance, dotting down in the left corner. Taylor’s touchline conversion might have gone wide, but having reduced the arrears from 20-7 to 20-19, Wellington College were suddenly the side with all of the momentum behind them and the London Irish fly half was to shortly bang over a penalty and give his side the lead for the first time since the opening exchanges, 22-20.

One could have been forgiven for thinking at this point that with a man’s advantage, Wellington might now pull away having seized back the momentum. Try telling the Sedbergh support that, if anything they redoubled their efforts, the drum was in full force and the noise levels rose.

Their side responded, too, their ambitious touchline to touchline attack had the Wellington College defence stretched and Roué grabbed the chance, launching a crossfield kick to the waiting Ben Redshaw on the right wing, who stepped inside delightfully to finish off and send the men in brown back in front.

Time was now becoming a factor, with the game seemingly now going tit for tat it almost felt as though it was going to be a case of whoever scored closest to 70 minutes would win, so when Mason Archer touched down for Wellington College with six minutes left, after glorious handling between Ayton and Starmer-Smith, it now surely Wellington’s to lose with Taylor’s conversion making it 29-25.

Untill the moment of the match. With about three minutes left, Roué picked the ball up in his own 22. There was nothing on, but with a huge step and some almost unreal acceleration, he managed to manufacture a two on one with Redshaw outside him. Delivering the pass almost along the line of the 22, he released the rangy centre, who tore up the field, stepping inside the defence before almost slowing, just a touch, to assess his options. He decided pace was the option and what an option it was as he roared away into the space down the right hand touchline, for a simply glorious length of the field try that with Roué’s conversion gave Sedbergh a 32-29 lead with barely anything left on the clock.

It was brilliant drama, worthy of any of the late heroics from the boot of the likes of Tom Curtis or Johnny McPhillips in previous years. Yet on this occasion the drama was not yet done. Wellington College had enough time for one more attack and when the referee blew up for a penalty 45 metres out with almost no time left, Will Ayton was in no doubt as to the correct call as he pointed to the sticks. Trusting the length of Taylor’s boot. Trusting it to perfection as it turned out, Taylor landed the balls inches over the posts to level the game at 32-32 as it would stay through one final, pulsating, play of the game.

In the end it was the sort of draw that leaves none deflated. A stunning game of rugby between two outstanding rugby teams who quite simply could not be separated. In trying circumstances the Sedbergh players stood up spectacularly, and then, when it looked like it could all go away from them, Wellington College did exactly the same. All over the pitch there were superstars, but in Ayton and Wright, both sides had a man that anyone would want to follow.

A stunning advert for schoolboy rugby, and a bonkers yet exceptional game.

1 Comment School Rugby: Sedbergh and Wellington College hold each other to extraordinary draw