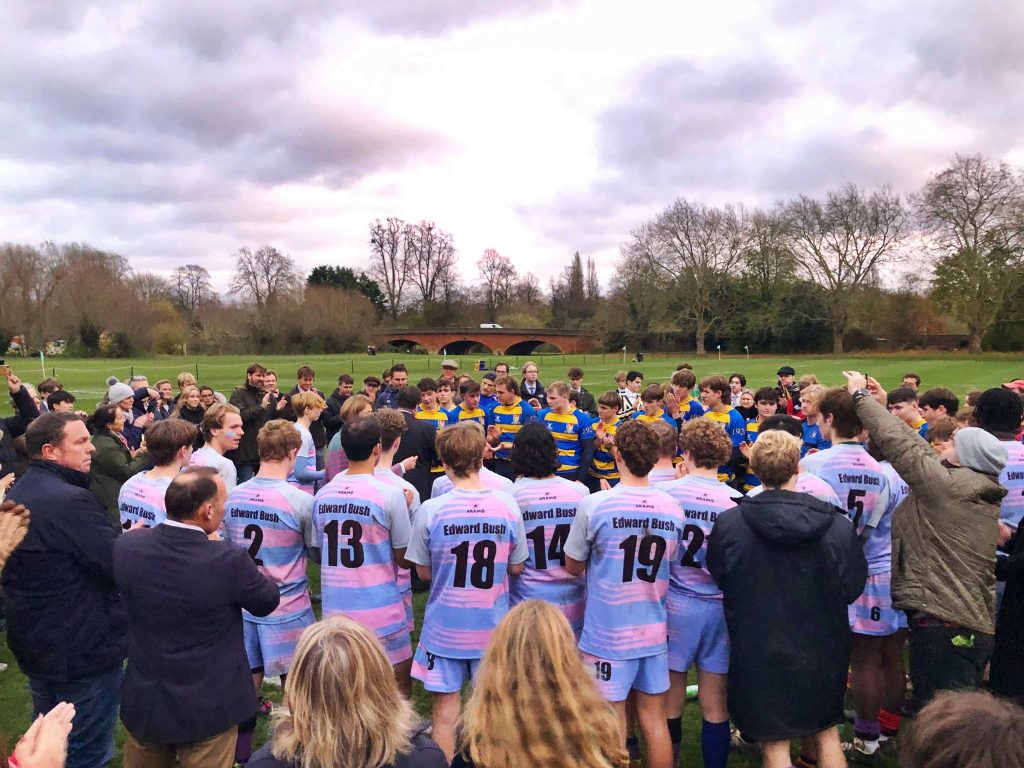 As December rolled in and the end of the season approaches for many, this week saw some fantastic rugby being played and some crucial fixtures as well.

With the U18 Schools Cup, Plate, Vase, and Bowl Quarter Finals being drawn on Monday, those playing catch up on their Last 16 ties knew who they were likely to face if things went their way in midweek, and some thrillers unfolded.

More important than any of that though was a game on Tuesday between Eton College and Stowe, played in memory of Edward Bush, who was a pupil at Stowe and was soon to move to Eton College to join his brothers before he tragically died.

The game was a moving and memorable occasion as both schools absolutely bound together in the spirit of remembrance and brotherhood. It began with both sides linking arms in two minutes’ silence and ended with all players being presented with a commemorative tie from the Bush family. In between the rugby was glorious joué was the order of the day, and with Eton having given the afternoon off to all those that weren’t playing to support the game, and with a huge number of parents, friends, and siblings alongside, there was a real sense of celebration of rugby and of Edward’s life.

Appropriately enough Eton’s first try was scored by Edward’s brother Harry, while his other brother James came on for a few conversions, Stowe littered their side with friends of Edward’s. The scoreline was unimportant, what mattered was the occasion and what an occasion it was, both sides contributing to the most wonderful celebration of Edward’s life, and helping to raise money to two causes close to Edward’s heart, the Military and Mental Health, you can donate in his memory here: https://www.justgiving.com/crowdfunding/memorial-for-ed?utm_term=NmXGK36bq

Elsewhere on Tuesday there were some games where the scorelines did really matter, with some crucial Last 16 ties. Not least at Harrow where they hosted Hampton in the U18 Schools Cup London & South East Regional Final. The winners knew that it would be an away quarter final against either Sherborne or Canford, they play on Saturday, and they put on a spectacular show. Early on it looked like Harrow could run away with but Hampton came roaring back in the second half. Harrow just managed to cling on though, progressed to that Quarter Final stage with a 25-19 victory, and you can read more about it in our report here: Harrow v Hampton.

Over in the Schools Plate, Norwich hosted Campion in the Midlands B Regional Final and secured a strong 22-3 victory that send them into the Quarter Finals with a trip to Stockport Grammar School on Wednesday.

Elsewhere, Millfield’s unbeaten season continued with a 19-14 victory at Monmouth an impressive win against a side that has been so good all season, all done with a much changed team having only faced Clifton College three days before, highlights of which you can see below. The victory keeps Millfield in the hunt for the Daily Mail Trophy, which will all come to a head on Wednesday when they travel up to the leaders, Sedbergh.

Wednesday saw Caterham making it back to back key victories, on Friday night they had that exciting victory over Hurstpierpoint College, highlights of which you can see below, and on Wednesday they then reached the Quarter Finals of the Schools Plate with a 20-15 victory at Wimbledon College in the London & South East B regional final. They now face Henley College in the quarter finals.

There was plenty of action in the Schools Vase too, perhaps most excitingly of all in the Midlands A regional final, which saw Coventry College and Oundle draw 10-10, with Coventry College progressing on try count, they head to the quarter finals now where they will face rising stars Ipswich.

In London & South East B Skinners’ and Sutton Valence went head to head in a battle between two sides that have impressed so much this season. The game went with the slope, Skinners’ were 5-0 up at the break but Sutton Valence came back to win 14-5, sending them into a quarter final tie with Bristol Grammar. Bristol Grammar had also progressed on Wednesday, with a magnificent 34-0 away win at Truro in the South West A Regional Final.

Over in the Schools Bowl Lord Wandsworth College won a thriller in the South West B Regional final at Cokethorpe, ending 24-21 in the visitors’ favour. Lord Wandsworth will now host Glyn on Wednesday in the quarter finals.

There was County Cup action too, Wirral Grammar won the Cheshire Cup in a nailbiting encounter with Cheadle Hulme, a brilliant contest ending 10-8 in their favour. Meanwhile in Middlesex Halliford claimed the county title with a 22-17 victory over Cardinal Vaughan, who staged a stunning comeback that Halliford just about managed to hold off.

Elsewhere there was a massive game at Warwick as they went head to head with an impressive Bloxhamside but managed to secure a 22-14 victory. Meanwhile their 2nd XV went down 26-0 to a Princethorpe College side that was playing some strong rugby. Elsewhere 2nd XVs were having a good day, Whitgift’swinning 19-0 at Hayes, and Exeter’s winning 5-0 at Devonport High, however The Crypt had a day to remember, defeating Hartpury College’s 19-10, and London Oratory defeated Hampton’s 2nd XV 14-12 as well as Gunnersbury and UCS.

Simon Langton Grammar had a storming day, winning 56-5 at Beth’s, and there were impressive scorelines for Haberdashers’, 46-12 at St Columba’s College, Leighton Park, 52-7 at Burnham Grammar, and Bishop Vesey’s, 36-5 at KES Five Ways, away from home too.

Aylesbury Grammar had a strong home performance against Next Phase Academy, 46-5, while Cedars were on song at home too, beating Dunottar 42-0, while KES Birmingham saw off the visiting challenge of Alcester Grammar 30-5.

There were some incredibly tight games too, Crossley Heath won 15-14 at Bradford Grammar, while Manchester Grammar won by the same score at home to Rishworth. Meanwhile in the South St Olave’s won 8-7 at Langley Park and Saint Cecilia’s beat Fulham Boys 19-17.

Thursday was a pretty quiet day but there was a loud performance from King’s Bruton, who were on fire in a 50-0 victory at home against Sexey’s. Meanwhile Beechen Cliff’s non-ACE side travelled to Downside and secured a 12-3 victory.