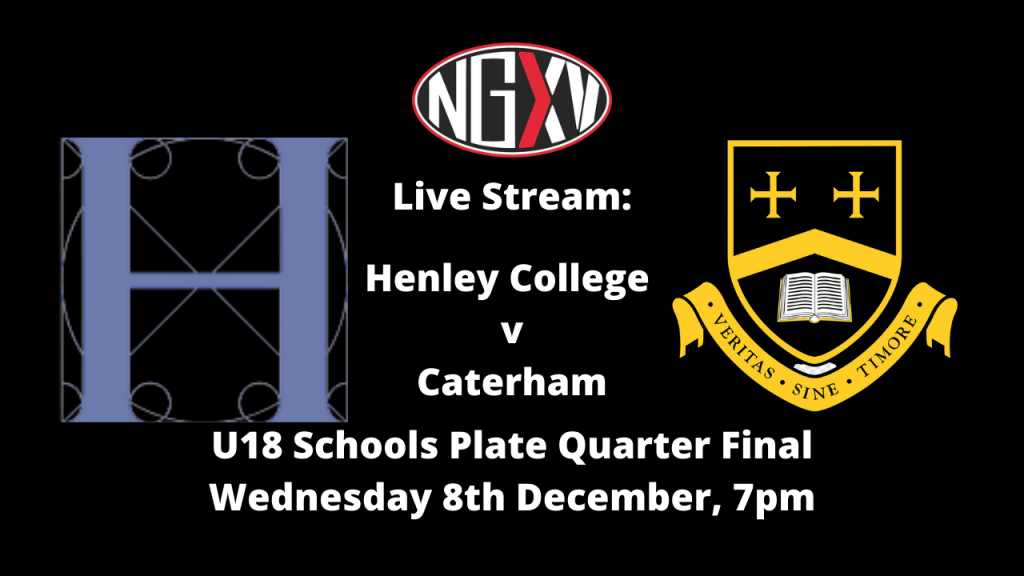 One Wednesday evening NextGenXV will live stream the U18 Schools Plate Quarter Final between Henley College and Caterham.

It will be Caterham’s second time on a NextGenXV live stream, while for Henley College this Quarter Final will be a first and you can watch it all live on our YouTube channel and via the embed below in this article, with kick off looking likely to be 7.15pm.

With our cameras in action at Reading Blue Coat v Wallington County Grammar shortly before it will be a smaller scale production but on the field it should be an absolute blockbuster.

Henley College are linked with Ealing Trailfinders and Brunel University and have been playing some brilliant rugby, a tight 12-11 defeat at Hampton just a couple of weeks ago perhaps showcasing that best of all for despite the defeat it was such a strong display against a side whose quality is widely recognised.

Henley are also one of the only teams in this Plate competition to have played a full set of game, in some sections at the regional stages barely a game was played and it is a blessed relief that there is a full set of eight teams in the quarter finals of what is supposed to be the RFU’s second tier U18 Schools competition out of four.

Henley’s opposition has been fierce, after moving from the Cup to the Plate after an opening round defeat to Radley College, they won a really tight game against RGS High Wycombe. Up next were RGS Guildford who, like High Wycombe, have been in flying form of late. Henley beat them 27-14 before then moving on to a 14-7 victory away at King’s Worcester to reach the quarter finals.

Caterham, in contrast, did not play a game until the regional final. After their Cup exit at the hands of The Judd, it was back to back Plate byes for Caterham before an exciting 20-15 victory over Wimbledon College to reach these quarter finals.

That formed part of a four on the bounce stretch of victories that leads Caterham into this one, one of which was their brilliant 28-19 victory over Hurstpierpoint College, which was streamed here at NextGenXV and highlights of which you can see below.

Predicting how this one might go is a tricky business, these two have few common opponents, the strength of some of Henley College’s opponents and their good performances against them perhaps suggested earlier in the season that Henley would be clear favourites. However Caterham have been sensational over the last month or so, perhaps tipping the balance back towards and even keel.

It all suggest that we should be in for an absolutely brilliant encounter on Wednesday evening!