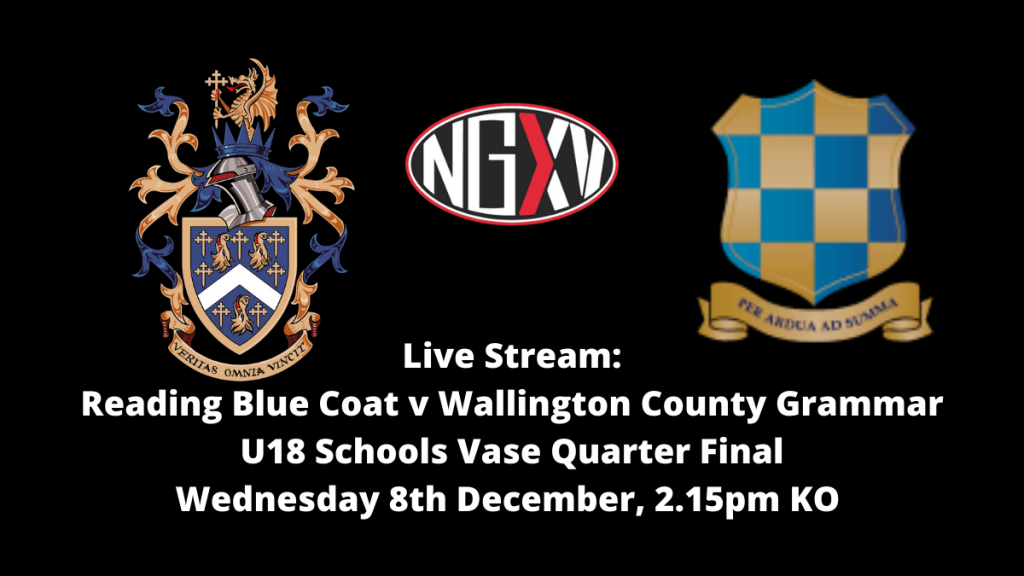 On Wednesday the NextGenXV live streaming cameras will once again head to Reading Blue Coat as we broadcast their U18 Schools Vase Quarter Final against Wallington County Grammar.

The two sides have performed superbly so far in reaching the Quarter Finals and look set to put on a blockbuster display at Reading Blue Coat on Wednesday afternoon, which you will be able to watch on our YouTube channel and also embedded below in this article.

Wallington County Grammar have had a strong season, they have played fourteen times and lost just once, and even that came all the way back in September against Reigate Grammar School. Since then they have been absolutely flying, with a 61-12 victory over St Dunstan’s a real highlight.

In the Vase they have been equally impressive, Harris Academy and Saint Cecilia’s were strongly beaten in the opening couple of rounds before a tight victory over Worthing College in Round 3. Then came a trip to Tiffin, whom they had beaten well earlier in the season, and they did so again in Round 4 of the Vase, 29-10. In the regional final though they faced a real dogfight against Mill Hill, just winning out 11-7 to reach this quarter final.

Reading Blue Coat have been mightily impressive too, winning eleven for their fifteen games, losing three, and drawing one. Those defeats have been against some big names though, Bishop Wordsworth’s and Abingdon early in the season and then last weekend at Magdalen College, who are a strong side but perhaps Reading Blue Coat had an eye on this massive Vase encounter. Wallington certainly have been able to, their last game was all the way back on the 24th November due to a couple of cancellations.

Highlights for Reading Blue Coat include a strong 45-0 victory at St George’s College Weybridge and a dramatic late win at Merchant Taylors’, but perhaps the most extraordinary of all was their stunning 40-19 victory over Bryanston in the last round of the Vase. Having beaten St James, The Oratory, and Windsor Boys’ in the Vase before a close one at Dauntsey’s in Round 4, the Regional Final against Bryanston was expected to be close, however in front of our live cameras Reading Blue Coat got off to the most incredible start and finished up with a stunning 40-19 victory, highlights of which you can see below.

That suggests perhaps a slight advantage to Wallington County Grammar, however the strength of the Reading Blue Coat circuit and indeed having faced the pressure of playing in front of the live cameras before, perhaps sways things back towards Reading Blue Coat a little.

One way or another, it looks as though it will be close!