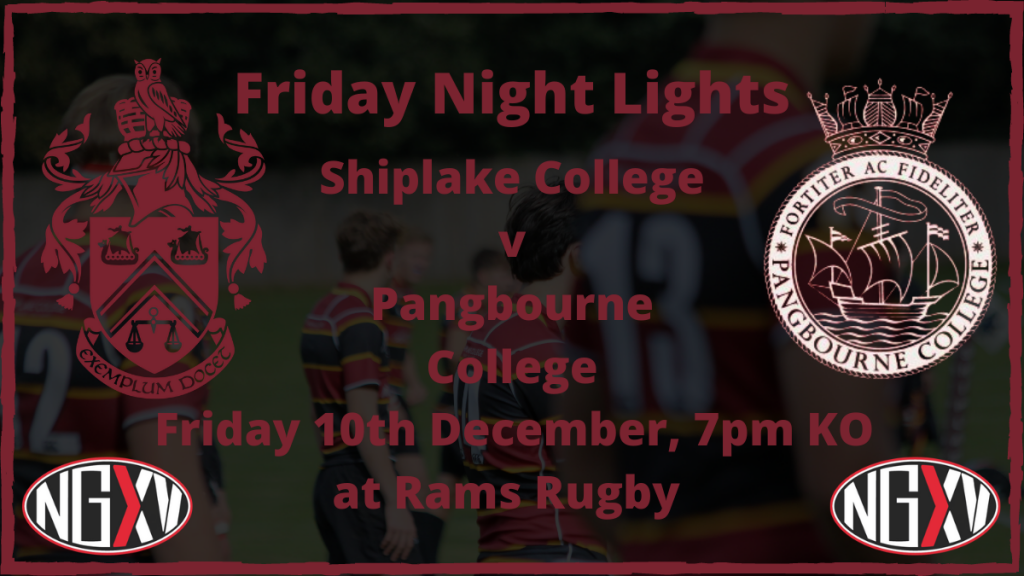 NextGenXV will live stream Shiplake College v Pangbourne College live from Rams Rugby in Reading on Friday night as the Schools Rugby season begins to draw to a superb climax.

For both Shiplake College and Pangbourne College it is the final game of the season, the last time that many of the players across either side will pull on their 1st XV shirts, a last run-out with their mates, and what a way for their schools rugby careers to end, in a live streamed game under the lights at a magnificent modern National League Rugby stadium, and you will be able to watch it all on our YouTube channel and via the link below.

It promises to be a fantastic game, too, this is a long-standing fixture and has gone this way and that through the years. They last met in 2019 where Pangbourne claimed a 34-0 victory, but the year before it went the other way, Shiplake College turning out 33-8 victors, and through the age-groups they have had the edge with these groups of players.

This season has gone well for Shiplake College, winning seven of their eleven fixtures, including a run to the third round of the Schools Vase. Big highs this season have come in other games under floodlights, winning 24-10 against Lord Wandsworth College before half term and just a couple of weeks ago beating Magdalen College under the lights 24-14.

That experience under the lights with a big crowd could be a big boost for Shiplake, particularly with the pressure it can bring, and with the additional pressure of the live stream, that experience many prove invaluable.

Pangbourne College have plenty to feel keeps the tide their way though, not least a tough fixture list that has included the likes of Aylesbury Grammar, St Edward’s Oxford, Dauntsey’s, and Bishop Wordsworth’s. They may only have won two of their eight fixtures, but they have been hugely competitive in many, including thrilling tight victories over St George’s College and Lord Wandsworth College.

They are interesting opponents in the context of this game though, as both sides have faced them, as well as The Oratory and Reading Blue Coat. They have similar results against Reading Blue Coat, both just losing out by less than a try, while both beat Lord Wandsworth College and St George’s College.

The only major difference is that in their first game of the season Shiplake College beat The Oratory 20-8, while in their final game before Friday night Pangbourne went down 41-14 to the same opponents.

However with those games happening at completely the opposite end of the season, even that is a difficult one to gauge ahead of Friday night’s game, since so much has changed in term of form, fitness, and weather in that time.

What is for certain is that Friday night is going to be a massive encounter, a thrilling evening under the lights and on the live stream. A big crowd is expected in Reading, and at Rams Rugby the setting is perfect with a big stand and a giant balcony over the clubhouse.

It’s all set to be an absolutely fantastic evening, make sure you catch it all live!