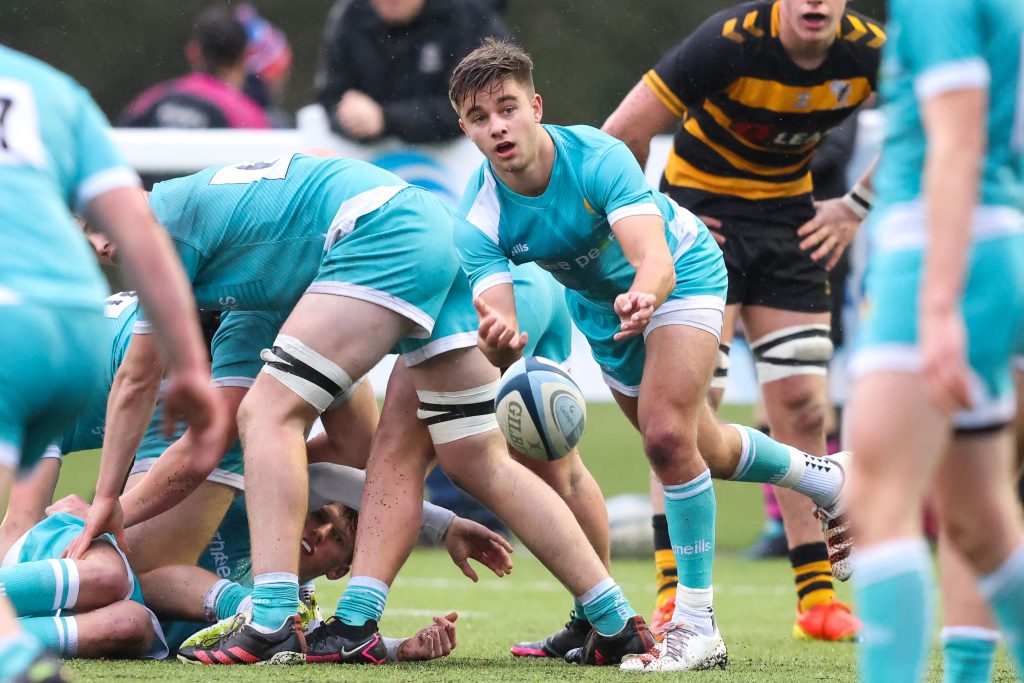 The Premiership Rugby U18 Academy League reaches its mid point this weekend with round four of seven.

After seven rounds the fourteen teams will have played the other sides in their pool once each, and will then head to finals day on the 19th/20th February, where they will face their counterpart from the other pool. For the winners of the North Pool and South Pool that will mean a head to head for the 2022 Premiership Rugby U18 Academy League title.

At the moment there are a few sides making strong challenge to be in that big final, in the North Pool Sale Sharks are unbeaten, having recorded victories over Northampton Saints, Leicester Tigers, and Worcester Warriors, while in the South Pool Saracens have also won three from three, beating London Irish, Bath, and Exeter Chiefs. Harlequins are the one of two other unbeaten sides, they had a bye in the opening round and have since beaten London Irish and Gloucester, Bristol Bears are the other with two from two, they had a bye last week after previous victories against Bath and Gloucester.

At the time of writing Leicester Tigers are yet to release their team as they look to build on their first victory of the campaign last week against Newcastle Falcons. Yorkshire Academy are searching for a first victory of the campaign, they had a bye week last week after defeats to Northampton Saints and Wasps and have made a few changes to the side that faced Saints. Worthington moves from the right wing to full back, with Yates going the other way, while Howells comes in at inside centre. Parker returns at loosehead after missing the last game, while Peach comes in at lock and Heptinstall gets an opportunity on the openside, having missed out in round 2 and started at 8 in round 1. On the bench Medway, Smith, and McCormack could all make their first appearacens of the campaign.

Sale Sharks’ quest to keep their unbeaten start going continues on Sunday against a Newcastle Falcons side that are in search of the first victory after defeats to Leicester Tigers and Wasps. Sale, unsurprisingly given how well the season has started, make very few changes to their side. 14 of the starting side that beat Northampton Saints remain, with Tom Campbell coming in at openside for Tristan Woodman, who will still run out with the bench, who are also otherwise unchanged. Newcastle Falcons also keep things to just one change, Gosforth Academy’s Ayden Knott is promoted to the starting XV at lock with Sedbergh’s Finn Baker reverting to the bench, while Baker’s schoolmate Jake Metcalfe returns on the bench after an enforced absence having started back in Falcons’ opener.

Worcester Warriors picked up their first victory last week, beating a Wasps side who had won their opening two fixtures of the campaign. Unsurprisingly therefore they keep the changes to a minimum, Dan Chambers is promoted from the bench to start at full back, with Solihull’s Jack Kinder moving to the wing. Chambers’ Stourport High colleague Ethan Allen moves up from the bench to start at hooker, with Loic Keasey this time starting from the bench, Ellis Locke meanwhile returns to the bench, after missing last week, where he is joined by Stourport’s Mikey Yalland, who is in line for a first appearance of the campaign.

Northampton Saints meanwhile are looking to bounce back from that defeat to Sale having won their previous two games, and they have made a few changes. The backline see a real re-jig, with Rugby’s Tommy Taylor getting his first start of the campaign, he starts at fly half, which pushes Radley College’s Toby Thame from 10 to inside centre, and in turn RHS’ Archie Kean from 12 to 13. Oakham’s Toby Cousins therefore moves from 13 to the left wing, with Northampton School for Boys’ Frankie Sleighholme moving to the bench, meanwhile Stowe’s Archie McParland gets a first start at scrum half since round 1. Up front Felsted’s Craig Wright is back at hooker, where he started in the opening two rounds, while Oundle’s Aiden Kabi returns at lock where he is joined by Colchester RGS’ George Lavender, who moves there from 6. Ted Reid therefore moves from 7 to 6, with Stowe’s Henry Pollock coming in on the openside for his first start. On the bench Aston Gradwick-Light and Oscar Bennett are in line for their first appearances, while Levi Wilson returns after missing the previous round.

Bath secured their first victory of the campaign last week against Exeter Chiefs and will be eager to make it back to back victories against London Irish in the lunchtime kick off. They are boosted by the return of Beechen Cliff’s Will Jeanes, who returns to the second row after injury and co-captains the side along with Sherborne outside centre Will Parry. Jeanes’ return means Max Jenkins returns to the 8 shirt from the second row, and with Archie McKibben out George Timmins moves from 6 to 7 with Jack Haythornthwaite coming in at 6 after being on the bench last week. On the bench Scott Kirk, Abdul-Khalik Akenua Al Kareem, and Kamoto Kamanga Dyrbak could all make their first appearances of the campaign, while the big news is that Arthur Green is fit to take a spot on the bench. The Sherborne man was injured while captaining the side back in round 1.

London Irish, meanwhile, are looking to bounce back after two incredibly close defeats to local rivals Harlequins and Saracens in the last two rounds. They have made a handful of changes to an already strong side, bringing Sam Rockley of Bishop Wand across from the left wing to the right wing, with Mill Hill’s Oscar Daniel moving from outside centre to the left wing as Alex Enright returns to the side at outside centre after missing the last game. Up from Harrow’s Oliver Stirling moves from the second row to number 8, with Connor O’Byrne of Wellington College returning to the starting side in the second row. Harrow’s George Hamblin gets a run on the bench after missing out in previous rounds.

Fresh from their week off, Bristol Bears are keen to make it three wins from three and they have kept a remarkably consistent side once again. Aaron Tull of Clifton College continues to captain the side from the blindside flank, and the only change to the side that defeated Gloucester sees Jimmy Halliwell promoted from the bench to start at tighthead, Billy Moran going the other way. On the bench Billy Marsden, Peter Paramore, and star Clifton College fly half Sam Worsley are all in line for their first appearances of the campaign.

Saracens meanwhile have an even bigger unbeaten record to protect as they look to make it four in a row after those victories over London Irish, Bath, and Exeter Chiefs. They have made plenty of changes to their side, including a move that sees Berkhamsted star Tobias Elliott shift from 12 to 15. In doing so, there is a new all-Sutton Valence centre combination, with Jenson McInulty coming in at 13 and Tom Barton filling the Elliott void at inside centre. Up from Ikhi Osebor of Haileybury comes in for his first start at loosehead in a swap with Freddie Chapman, while Simon Langton Grammar’s Kennedy Sylvester comes in at lock, with Jacob Ray of Sutton Valence in on the openside flank. On the bench Will Stanford, Olamide Sodeke, and Louie Sinclair could all make their first appearances of the campaign.

Exeter Chiefs give Harlequins an early start with the long trip down for a 12pm kick off in Truro, Chiefs are looking for a first victory of the campaign after defeats to Saracens and Bath. Following on from defeat to Bath they make a few changes, Zack Wimbush comes in at outside centre, while u front Rowan Lawrence gets a go at loosehead. In the second row Ed Spurway returns to the side after starting on the flank in the opening round, meanwhile Barnaby Elderkin moves from 6 to 8 with Will Saltmarsh promoted from the bench to start at 6. On the bench Kyle McGhee and Alfie Hammersley could make their first appearances, and there is a return to the bench for Jack Ballett too after missing the last game.

In contrast to Exeter, Harlequins are looking to maintain their unbeaten start after consecutive victories over London Irish and Gloucester following their opening round bye. They make a few changes to the side that beat Gloucester, with Gordon’s Guy Rogers coming in on the right wing and St Paul’s Claudius Wheeler getting a start at loosehead after impressing last time out. Gordon’s Tom Golder also gets a start, he comes into the second row in the only other change. On the bench Churcher’s College’s Jack Thomas could make his first appearances, while Tosin Teriba returns after missing the last game, Whitgift’s Jamie Flatley also returns to the 23 after missing out last time.