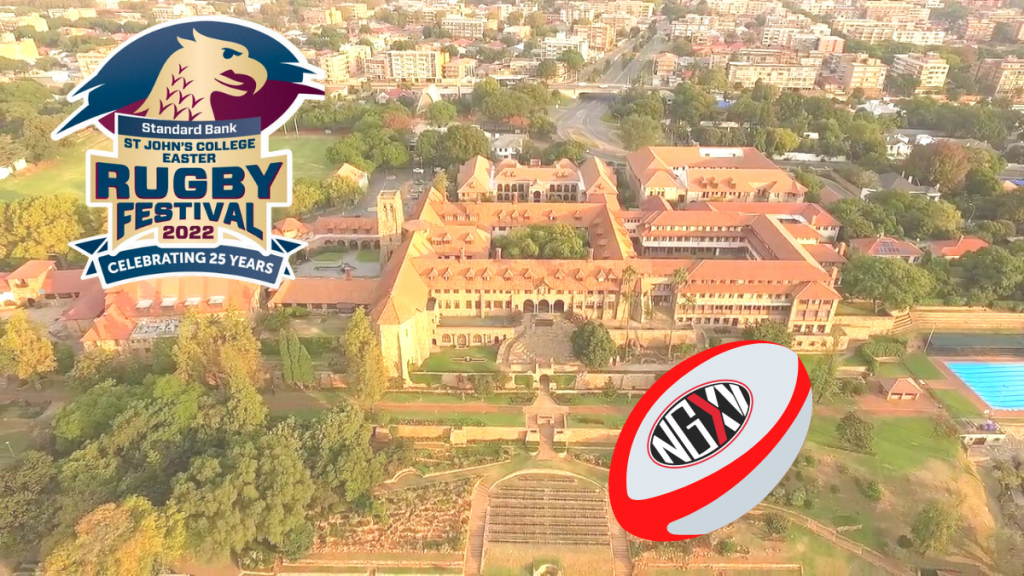 Nestled in Houghton, the awe-inspiring estate of St John’s College played host to its annual Rugby Festival. A highlight on the school sports calendar.

Day 1 kicked off with Helpmekaar being pushed to the limit by Graeme College scraping through 10-7 victors against the men from th Eastern Cape. Next up giants Paarl Boys High brushed aside an Lions Invitational XV 83-0 in a mismatch. Next up Hilton College put St Benedicts to the sword running away 62-3 victors. In the game of the day, Boland Landbou, fresh off their Tour of Ireland took on Noordheuwel who are having a fantastic season so far punching it up with the traditionally stronger schools in the country. It was all to play for with 10 minutes left but neither team could break the deadlock and the match ended in a 25-25 draw. St Davids took on St Charles next and the men from Johannesburg used their local advantage to good effect winning 19-12 against a spirited St Charles team. The Maroon Machine of Paul Roos put on a masterclass against Welkom Gimnasium winning 50-6. The hosts St Johns came up against Nelspruit looking to open their account positively but the men from the North had other ideas and came away with a 24-5 win despite strong passages of play from St Johns.

Day 2 opened up with Noordheuwel flexing their muscles against St Davids winning 60-5 and Boland Landbou opening their account at the festival with a 38-0 win over St Charles College. In a close affari for the majority of the match, St Benedicts beat the Lions XV 38-21. Hosts St Johns took on Graeme College but could up unearth them going down 28-7. Hilton College made it two from two games beating Welkom Gimnasium 48-3 as the Midlands men impressed the crowd. Paul Roos showed why they are a traditional superpower by beating a classy Nelspruit side 40-3. Paarl Boys High closed the day beating a spirited Helpmekaar side 32-16 in a game where the score did not entirely reflect the closeness of the match.

The Final day saw St Charles edge out St Benedicts 17-9 in a close game and St Davids beat the Lions XV 31-0. In a closely fought game the men from Welkom Gim beat a competitive Graeme College team 26-24 to get their first win of the festival. Conditions were deteriorating fast at St Johns with the field struggling to hold up after strong rains. Helpmekaar ended their festival with a close game against Nelspruit winning 10-7 and will undoubtedly carry momentum forward into the remainder of the season. St Johns came up against Noordheuwel and impressed for large passages of play but could not quite pull the trigger. Noordheuwel came away 17-5 victors. Conditions made for a slow game in the Affies vs Boland Landbou game and neither team was giving each other the edge but the men from Pretoria came out tops winning 12-5. Both teams can hold their heads high after that encounter. To close the festival Paarl Boys took on Hilton College in a game where horrid conditions plagued the match. Paarl Boys went ahead 14-0 at the break through their strong maul. Hilton would not back down and replied through their talismanic captain, Dyer, who is surely a shoe-in for a KZN Craven Week spot. Neither team could breach each others watertight defense and the match ended 14-5 to Paarl Boys.

Our St Johns Team of the festival:

PrevPreviousU19 Internationals: England and Italy to meet on Saturday
NextSouth Africa: The Weeks Results (23 April 2022)Next