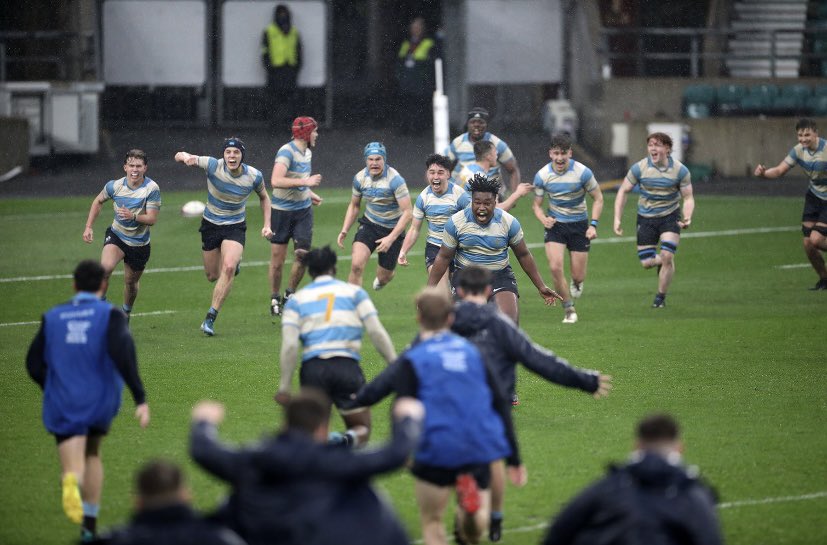 The draws for the 2022/23 U18 and U15 Schools Cup and Vase competitions have been released, alongside the round dates for the competitions that will run from mid-September 2022 to mid-March 2023.

The U18 Schools Cup draw is a much tighter draw than usual, with just 64 teams in the draw. That means that there are eight teams in each section of the draw and that the competition is hot right from the beginning.

Reigning champions Trinity are in London & South East A and though they have a home draw it is one of the toughest assignments around, hosting 2012, 2013, and 2014 champions Dulwich College. Indeed the whole section is fairly brutal, Cardinal Newman, linked closely with Ealing Trailfinders, are hosting Hurstpierpoint College, while Trinity’s near neighbours John Fisher are off to The Judd. Meanwhile the third of Croydon’s trio of top teams, Whitgift, who won the title in 2010, 2011, 2019, and shared it in 2020, are also in the section and have arguably one of the great first round ties, heading to Epsom College, one of the stars of the 2021/22 season.

London & South East B meanwhile looks intense too, Daily Mail Trophy champions Berkhamsted are hosting New Hall, while Harrow will head to 2008 finalists St Benedict’s, in what could be a cracker after both side’s 2021/22 seasons. Hampton v St Paul’s is another blockbuster in the section, while there is a huge derby at the top of the sections, KCS Wimbledon v Wimbledon College, one of the great derbies in schools rugby.

The North section of the competition looks incredibly strong, featuring a host of legends of the tournament. North A sees QEGS Wakefield and Woodhouse Grove going head to head, both of whom are always strong sides, while St Peter’s York head to Leeds to take on Grammar School at Leeds. On the other side of the Pennines Lancaster RGS have an away tie at Stonyhurst College, while in the North East comes one of the ties of the opening round, Barnard Castle v RGS Newcastle, two legends of the competition.

Over in North B 2015 and 2016 champions Bromsgrove have moved from the Midlands to the North section of the competition and begin life in the new section against fellow former Midlanders, Solihull. King’s Macclesfield, a side to keep a quiet eye on, are heading to Oswestry, while Stockport Grammar welcome Cheadle Hulme and Merchant Taylors’ are hosting Liverpool College.

The Midlands section might well be the strongest of the lot, and features a host of massive derbies. Midlands A sees Oakham v Uppingham right at the top of the card, the Rutland derby, and along side that is the Worcester derby as King’s Worcester host RGS Worcester. The other two games in Midlands A are massive too, Rugby School hosting 2007, 2017, and 2018 champions Warwick, two absolute giants, while Stowe and Bloxham go head to head, two sides that have won the Plate but will be desperate for a Cup run rather than another go at the Plate that defeat would hand them.

Midlands B features one of the rising stars of the school game, who are going to be a real threat in 2022/23, Ipswich, who are hosting Finborough. Former champions Campion are hosting Felsted, a side well used to a long run. Bedford’s trip to Haileybury could be massive, while local rivals Bedford Modern are hosting former finalists Northampton School for Boys, a side that always seems to perform well in this competition.

The South West is a strong section too, and South West A features some great sides, Seaford College v RGS High Wycombe could be very special, one of the most rapidly upwardly moving sides in Seaford taking on the former champions RGS. Elsewhere Marlborough College v Abingdon is a game that could be very special and Caterham v RGS Guildford should be a cracker too, look out also for two time finalists Bishop Wordsworth’s, who are hosting Canford.

The South West B section is loaded, Welshmen Monmouth will cross the water to take on Sir Thomas Rich’s, and there is yet another derby game in this section too, the Taunton derby as Taunton School host King’s College. Blundell’s meanwhile host Richard Huish, while Sherborne, who were so good en route to the semi finals last year, head to the most successful side in the tournament’s history, Collegiate School in Bristol, formerly known as Colston’s.

The Schools Vase has a whopping 256 entrants, and includes some legendary names such as Durham school, Ampleforth college, and reigning champions Mount St Mary’s College, along with the likes of Bradford Grammar and Manchester Grammar in the North sections.

The Midlands sees schools such as St Edward’s Oxford, Coventry College, and Bishop Vesey’s involved, so too Oundle, St Albans, The Leys, The Perse, and Langley, among others such as Royal Hospital School.

London & South East includes huge names, including Glyn, Tiffin, Reigate Grammar, Worth, Hayes, Eltham College, Sevenoaks, and Skinners’, and a whole host of others, look out too in London & South East A where there is a huge derby to kick things off as St George’s College Weybridge host Reed’s.

The U15 Schools Cup sees reigning champions Wellington College drawn against Vase semi finalists Reading Blue Coat in South West A. It is a loaded section, Clifton College have a bye to Round 2 where they will play either Bristol Grammar of Katherine Lady Berkeley’s, while elsewhere there are two massive derbies, with Abingdon hosting Radley College and Dean Close welcoming Cheltenham College. Also in the section, Sir Thomas Rich’s head to The Crypt, while Gordon’s host Windsor Boys, and Cup legends RGS High Wycombe host St Celement Danes.

South West B meanwhile sees Sherborne with a first round bye but the reward is going to be a tough one, a game against one of two legends, Collegiate School Bristol or Millfield, either way it’s a huge start in South West B. Canford meanwhile head to Priestlands, and Marlborough College travel to Dauntsey’s. Ivybridge Community College have a massive reputation in this competition and begin away at Shebbear College, while in a big Devon derby Blundell’s host Exeter School. Taunton School are at Wellington School, while local rivals King’s College Taunton head to Brymore Academy.

Last year’s runners up, QEGS Wakefield, are in action in a massive game in North A, hosting Woodhouse Grove, and the winner will have another massive game right away, facing the winner of Kirkham Grammar v Stonyhurst College. Sedbergh have an opening round bye and will travel to either Lancaster RGS or Nelson Thomlinson in Round 2. The other side of the draw is loaded too, Durham host RGS Newcastle in a massive derby, the winner will face either Barnard Castle, legends of this tournament, or St John Fisher. St Peter’s York head to Hymers College, while Grammar School at Leeds are in action at Rodillian Academy.

North B is a little thin, with just 7 sides in the section, King’s Macclesfield have an opening round bye and will face either Stockport Grammar or Cheadle Hulme in Round 2. Meanwhile St Anselm’s College are hosting Liverpool College and St Ambrose College travel to Merchant Taylors’.

The Midlands A section includes a couple of byes, Uppingham go to Round 2 and will play either Stamford or Oundle, while Warwick are also straight into Round 2 and will head to either KES Five Ways or Wrekin College. Elsewhere, U18 Vase champs Mount St Mary’s are at Wales High, and Oakham are hosting Loughborough Grammar. RGS Worcester and Malvern College go head to head in what could be a cracker, while Bromsgrove and King’s Worcester go head to head in a fixture with plenty of history.

Midlands B also has some byes, Rugby School are straight to Round 2 and will be a either Bedford Modern or Wellingborough. Ipswich School, meanwhile, will be at home in Round 2 against either Campion or Haileybury. As in the U18 Cup, Stowe and Bloxham are drawn together, meanwhile Northampton School for Boys are in Bedford, but until the U18s they are at Bedford School rather than Bedford Modern. Finborough host Norwich, and in a South East clash St Joseph’s College host New Hall.

The big story in London & South East A is surely that John Fisher and Whitgift both have first round byes and will face one another in round 2 in what is one of the biggest derbies in all of schools rugby. There are some massive first round head to heads too, not least Berkhamsted v Harrow, two that are right at the sharp end at the moment. Both Wimbledon schools are away, Wimbledon College heading to Hampton and KCS heading to St Paul’s. Meanwhile St Benedict’s welcome UCS and Dulwich College travel to Cedars, while Epsom College are travelling to Richard Challoner.

There are three byes in London & South East B, Trinity School are straight to Round 2 and will face either Ravens Wood to Eltham College. Sevenoaks also have a bye and will next face either The Judd or Bennett Memorial. RGS Guildford’s reward for their bye is a trip to either Dunottar or St John’s Leatherhead. Elsewhere there is a Sussex derby as Hurstpierpoint College host Brighton College, meanwhile Seaford College are at Churcher’s College.

As in the U18s, there are some fantastic teams in the Vase competition. In the North the likes of Trent College, Silcoates, Bradford Grammar, and Prince Henry’s are around, so too Ampleforth College, Giggleswick, Lymm High, Wilmslow High, and a great Wirral derby, Calday Grange v Wirral Grammar.

The Midlands includes Old Swinford Hospital, Solihull, Leicester Grammar, The Leys, The Perse, St Albans, and a great fixture between Langley and Gresham’s among the many highlights.

London & South East has loads of good games, among them Colchester RGS v Felsted, plus exciting sides such as Caterham, Hayes, Skinners’, London Oratory, Reed’s, St George’s, and Reigate Grammar among the many top teams.