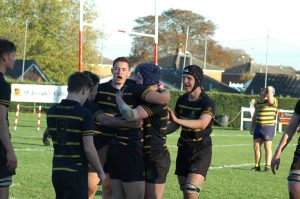 This week sees a huge amount of school rugby with a number of independent schools packing in a midweek fixture ahead of an exeat weekend for many this weekend.

That means that while Saturday’s fixture list may be slightly shortened by so many independent schools being off over the weekend, the midweek schedule is absolutely mouth-watering.

The midweek schedule also contains two live streams as we bring you live coverage of Haileybury v Blundell’s at 7.30pm on Wednesday evening, live from Saracens’ Stone X, and then on Thursday it is off to Clifton RFC for live coverage of Clifton College v Kirkham Grammar School, one of the most anticipated games of the season at this early stage.

Both games are set to be huge occasions and should provide plenty of reason for excitement, Haileybury are looking really promising this season and their nights at StoneX are always special, and it’s a long trip for Blundell’s, who will be determined and excited to perform on the big stage. On Thursday the drama only increases, Clifton College have already pumped in results that suggest they are one of the very best, while Kirkham Grammar are yet to play yet are billed in pre-season as one of the teams to look out for.

Anticipation here at NextGenXV is high ahead of those two, but there is so much other rugby going on as well, with games on Tuesday, Wednesday, and Thursday, including some early Schools Cup games and tidying up of the first round of the Schools Cup, plus some huge regular season fixtures.

The Schools Vase dominates Tuesday’s proceedings, with Midlands B looking particularly busy. King’s Ely host Saffron Walden with the winner set to meet Richard Hale, while St Edmund’s College hosts Langley with the victor lined up to face Framlingham College. Woodbridge and Royal Hospital School meet, but the winner will have to wait to find out who they play, Farlingaye or Colchester RGS.

South West A also has a couple of games Marling and St Peter’s Gloucester meet for a chance to take on The Crypt next, while Clayesmore and Thomas Hardye also meet, the winner will face the winner of Thursday’s game between Warminster and Gillingham. In North A St Ambrose College take on Scarisbrick Hall and the winner will not have long to wait to find out who they play, with Bolton and Lymm High going head to head on Wednesday.

Outside of the Vase there is action is Scotland as Morrison’s Academy welcome Glenalmond College.

Elsewhere the massive games keep on coming, perhaps most notably in the trip of Millfield across the border to Wales to take on Coleg Sir Gar. A massive game of rugby between two of the finest sides in each of their respective countries, and indeed the world, and a very special fixture year on year. It’s not to be missed. Millfield’s 2nd XV are also in action, they host Bishop Wordsworth’s in what will be a stern test.

Wednesday also sees a couple of early Schools Cup fixtures, perhaps none more so than King’s Worcester v RGS Worcester, a precursor to the Modus Cup that will be taking place in mid-October and therefore a game with double the amount riding on it as they not only seek Cup progress, but also a chance to lay down a huge psychological marker ahead of that derby game in October. Merchant Taylors’, Crosby and Liverpool College also meet in an early Schools Cup fixture, and it promises to be a good one between two strong sides.

Hampton are off to a flying start this season with victories over Seaford College and Brighton College, they will be looking to continue that form on Wednesday when Campion come to visit. There is also a massive game at Brunel University as Hayes and Shiplake College meet in what is due to be an incredibly special occasion for both, but particularly for Hayes as part of their strengthening relationship with Ealing Trailfinders.

Elsewhere in the South East look out for the ever impressive Halliford hosting Windsor Boys’, while St Benedict’s, such stars last year, have a trip to Ewell Castle. Tiffin, meanwhile, are on the road to take on Gordon’s 2nd XV, their first XV are in ACE action.

Simon Langton Grammar head to Beth’s Grammar, with Fulham Boys on the road at Wetherby, Wilson’s meanwhile are playing host to Carshalton. Claires Court have a trip to Salesian, while St James’ travel to Ranelagh and Queen Mary’s are at Ryde with Upper Chine, who were in sparking form over the weekend.

Out further West there are come massive games as Magdalen College make the trip to Cokethorpe and KES Five Ways and KES Stratford go head to head in what is almost always a fantastic game of rugby. In the South West Plymouth College take on Truro College’s 2nd XV, their first XV are in ACE action.

Moving to the North of England where there are some top fixtures, not least in Yorkshire as Ampleforth College host Ripon Grammar School. Over on the West things are exciting too, King’s Macclesfield’s trip to St Anselm’s College should be excellent, while Lancaster RGS are in action after a few cancellations, hosting QES Kirkby Lonsdale.

The Schools Vase is packed full of action on Wednesday too. North A sees Bolton host Lymm High with the winner, as earlier mentioned, playing Tuesday’s victor from Scarisbrick Hall v St Ambrose College. North B also sees action, with former Cup champions Bradford Grammar hosting Silcoates. The winner of that one will play either Crossley Heath or Rishworth.

In Midlands A there is a second round game as KES Camp Hill welcome KES Birmingham  after the two sides progressed from the first round last week. Meanwhile in Midlands B Samuel Whitbread Academy, the former champions, are hosting Hitchin Boys, with the winners facing either Roundwood Park or Sandringham.

London & South East A has a couple of games, and in both the second round opponent is known. Reigate Grammar host Richard Collyer, with Worth the prize, while Rickmansworth welcome Haberdashers’ Elstree, with Claires Court awaiting. Over in London & South East B it is the same situation for the teams playing, with their round 2 opponents known. Langley Park await the winner of Harris City Academy v Kingsdale, while it is Emanuel for the victorious side from Wallington County Grammar v Saints Celcilias.

Elsewhere the big games come thick and fast on Thursday, not least Bedford v Radley College. Bedford whose start to the season has been electric, beating Oundle handsomely and drawing a thriller with Rugby School. Radley College meanwhile only played their first game on Saturday but enjoyed a fantastic victory over Sherborne. This game is set to be fantastic.

All of the teams that they have faced so far are in action on Thursday, indeed both of Bedford’s opponents are, with Rugby hosting Oundle. Both are without a victory so far this season and will be eyeing up Thursday with real intent. Sherborne, meanwhile, look to bounce back from that opening defeat to Radley with a trip to Collegiate, who have started the season in flying form. It should be a fantastic game anyway, but the fact that it doubles up as a Schools Cup game only adds to it, with Collegiate the most successful side in the competition’s history, and Sherborne having reached last year’s semi finals.

Staying in the South West the big fixtures just keep on coming, and among the many is Cheltenham College v Marlborough College. It should be fantastic, both have started well with Cheltenham beating Bloxham and only going down narrowly in a tough away trip to Monmouth, while Marlborough are two from two against Canford and Abingdon.

Along the road Bryanston are in action at Clayesmore, and Bryanston will be keen to build on a top performance on Saturday. Meanwhile Canford are travelling to Dauntsey’s and King’s Bruton welcome Wells Cathedral. Cathedral School Llandaff make the trip across the border to take on a Monkton Combe side that is absolutely bursting with confidence at the moment, while Queen’s College Taunton are hosting Clifton High.

Nearer London there is a classic fixture between two of the oldest and most prestigious rugby playing schools around as Eton College host Tonbridge. Eton are in sparkling form so far this season with 2 from 2 and will be full of confidence, Tonbridge on the other hand arrive looking to spark themselves into form after a couple of tough defeats to open the season.

Up in Scotland there is a classic too as two of the country’s finest go head to head, Merchiston Castle and Fettes College, a game that is always a great occasion.

There is also a little bit of Vase action on Thursday, and in South West A Warminster and Gillingham go head to head. They will know who they are playing, as their opponent next is the winner of Tuesday’s Clayesmore v Thomas Hardye encounter.

Midlands B sees action too, with Gresham’s travelling to Beaumont, the winner of that will face Bishop’s Stortford High School, while in London & South East B King’s Canterbury host Chatham & Clarendon, with the winner playing either St Lawrence College or Herne Bay High.