NextGenXV Podcast: Greatest Schools XV of the Decade – The Forwards

The forward pack has been named for the NextGenXV Podcast Schools Team of the Decade, with eight different schools represented.

Each week co-hosts Angus and Dan have been selecting players by position, starting with the front row, then the second row, and then last week with the back row, all on the NextGenXV Podcast, which you can listen to and download on Acast, Apple Podcasts, and Spotify, and watch on our YouTube channel – check out this week’s latest episode below.

The options have been many, and even the list of those not mentioned on the shortlists are fairly astonishing, but in the end a pack has been constructed that would be the envy of many.

There were some huge potential options across the pack, and with the criteria simply being that they needed to have played between 2012/13 and 2021/22 in UK schools rugby there really was a breadth of options, but the NextGenXV co-founder and the former Wellington College and Caterham School Director of Rugby settled on a eight of:

A formidable trio, Obano won three U18 Schools Cup titles in a row with Dulwich College and was one of the most powerful carriers in school rugby, as comfortable and eight as he was at loosehead, and one of the most feared opponents for would be tacklers.

It was a similar story for Barbeary, who helped Bloxham to an U18 Schools Plate title – playing at centre for much of that final. Able to fit in pretty much anywhere in the team, Barbeary was one of those school players that feels like a generational talent.

Baxter, like Barbeary, was a real leader and helped Wellington College to U15 Schools Cup success, U18 Champions Trophy success, and a St Joseph’s Festival title. An astonishing record. Adept on either side of the scrum and with a skillset every inch that of a modern prop.

A powerful and skillful second row unit if ever there was one. Tshiunza was a totem for Whitchurch High School, which is no stranger to rugby royalty, Sam Warburton is a former pupil. Some of his performances, particularly at the St Joseph’s Festival left onlookers open-mouthed. Dominant in the tight, but adept in the loose as well, little wonder Exeter Chiefs have been playing him at openside of late. His two days at St Joseph’s were arguably the best any second row has had there.

Kpoku was equally dominant for Oaklands College, possessing enormous power and one of those players that simply seems to exude influence over a game of rugby. An absolutely towering presence certainly helped, but it was matched with true carrying ability and an impact with every single involvement.

A bit of a fudge on the blindside as separating (natural opensides) Ben and Tom Curry was simply too difficult and their influence of their Oundle side was absolutely equal. The twins raised the level of all around them, creating an atmosphere of intensity at every game that few could match that saw them go all the way to the Schools Cup semi finals. Often with Ben at 7 and Tom at 8, few could do anything about the ferocity that the pair could bring, even as a pair of 17 year olds.

Ben Earl was for Tonbridge as he is now for Saracens, an absolute all-round athlete who could sometimes win games almost single-handedly. Used primarily as an 8 but often in the centres as well, 7 was probably his natural home given his speed and squatter frame. One of the most influential players of the last ten years and almost impossible to contain.

At 8, Zach Mercer was a force of nature for Merchiston Castle. He won Player of the Tournament at the St Joseph’s Festival in 2014 and it was not even close. He was an absolute standout and that same year helped take his side to the U18 Scottish Schools Cup Final. In many ways he looked ready for men’s rugby then, his game now being not all that different to how it was then, but goodness was it impressive to watch on a school pitch. 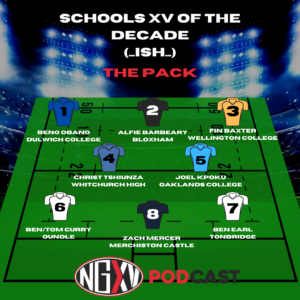 Coming Up: The Backline

With the forward pack selected, Angus and Dan now move onto the Backline, tune in to Episode 5 this week on Acast, Apple Podcasts, and Spotify, or indeed watch it one YouTube, where they select their scrum half.

Next week it’s the fly half, and there are plenty of candidates – make sure to get in touch with your suggestions!

This weekend is the final weekend of the schools rugby this term, a weekend that