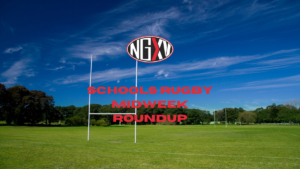 What a week of schools rugby it has been, with an absolutely packed fixture list with so many sides having the upcoming weekend off.

With games on Tuesday, Wednesday, and Thursday, the action has been constant, including an epic Live Stream here on NextGenXV from Kingston Park as Cheltenham College and Sir Thomas Rich’s went head to head in an absolute epic, which you can relive below.

It leads us into a weekend that should be an absolute cracker, in this week’s NextGenXV Podcast the quality of the teams quickly became apparent, as indeed did the quality of last week’s games as we picked our Top 5 School Teams of the Weekend, supported by Limitless, one of the hardest of the year.

One of the most exciting of all this weekend though is the return of The Schools Championship as Millfield host Whitgift, which you will be able to watch live here on NextGenXV both on our YouTube channel and below.

Of course though, before the weekend we dive in and take a look at the week that’s been and some absolutely outstanding midweek games.

The action began on Tuesday and the key game was surely the U18 Schools Cup tie between Finborough and Bedford. Two incredibly strong sides competing in the Midlands B Regional Final. Bedford have so much rugby heritage and are having a great season, but Finborough are the coming force, having already taken scalps such as Ipswich, Northampton School for Boys, and Felsted, and the Suffolk side were at it again on Tuesday, winning an absolute nail-biter 12-7 to progress to the quarter finals, a stunning result for a side that is making the most enormous impact this season.

Fellow Suffolk side Ipswich were also in action, taking on Felsted in a regular season game and coming away with a stunning 56-0 victory, they really are playing some of the top rugby in the country. Elsewhere, The Perse were in action at Bishop’s Stortford College, winning 27-12, while Wellingborough beat Bishop Stopford 24-0. There was also a 24-0 in the Schools Bowl, Leicester Grammar knocking out St Clement Danes.

Wednesday’s games saw the knockout competitions dominating, and in the U18 Schools Plate in Midlands A Bloxham won an entertaining tie between two well matched sides in themselves and Rugby School. Bloxham led 10-7 at half time and stretched out to a 20-7 lead after the interval, but Rugby came back strongly to set up a tense finish. With Bloxham centre Ben England controlling things through his kicking from hand, Bloxham were able to close out the game, with Rugby snatching a try with the final play of the match.

In North A Barnard Castle reached the quarter finals after a tight and tense victory over QEGS Wakefield, while in South West A RGS High Wycombe confirmed themselves as the region’s quarter finalists after an excellent 29-7 triumph over Abingon.

Over in the Vase Dauntsey’s and Eastbourne College will meet in the South West A regional final after Dauntsey’s enjoyed a 50-0 victory over Ryde and Reading Blue Coat sadly had to withdraw against Eastbourne. Old Swinford Hospital booked their place in the South West A final after a 43-12 victory over Bristol Grammar, they play Ivybridge, who secured their place last week.

The Midlands B Regional final was also confirmed, Samuel Whitbread Academy winning an absolute thriller against St Albans, 28-26, the game of the round. They will play Richard Hale, who look utterly relentless this season and were so again on Wednesday against Colchester RGS, winning 54-6.

Over in the Bowl there was also action, and what action, a thrilling 17-17 draw between St George’s College Weybridge and Tiffin.

Scotland’s knockout season is upon us too, there were two Scottish Schools Cup Quarter Finals on Wednesday, North Berwick High winning a tight one against Robert Gordon’s College 17-14, while Merchiston Castle turned around their defeat to George Watson’s College the other week by beating the same opponents 31-11, a brilliant turnaround.

In England, Ashville Harrogate won 21-19 at home to Ripon Grammar, while on the other side of the country Lancaster RGS were in top for at Bolton, 42-3, and Cheadle Hulme enjoyed their time at home v The Grange, 57-5, so too St Edward’s College, who won 52-21 against Manchester Grammar, a brilliant effort.

One side that have just been consistently outstanding this year, and remain unbeaten, are King’s Macclesfield, and on Wednesday their booked their County Cup final place with a superb 30-0 victory at Calday Grange Grammar.

Further South, KES Camp Hill won a tight one against Shrewsbury 15-13, with Queen Mary’s Grammar winning 27-7 again KES Aston, meanwhile across the border in Wales Llandovery College were in sparkling form to beat Coleg Sir Gar 29-10 in a real game of Welsh giants.

In the South West of England there were two crackers, King’s Gloucester winning 18-17 at home to Marling and Cheltenham Bournside winning 5-0 at Cleeve, meanwhile Truro School enjoyed a strong 36-5 victory over Callywith College.

In London, John Fisher and Campion played a real classic, a nip-tuck game that just went the way of Campion, 17-14. Fulham Boys were outstanding, winning 43-15 against Wetherby and Saint Cecilia’s were 57-0 victors at Graveney. Cardinal Vaughan enjoyed a 19-7 victory over Ewell Castle, while Hayes were absolutely sensational in a 40-7 victory away at Eltham College.

Things were exciting at Gravesend Grammar too, where Ravens Wood won 19-8, while Oakwood Park were in great form at Trinity Sevenoaks, winning 49-19.

Thursday was another epic day and perhaps nowhere more so than at the NextGenXV Live Stream where Cheltenham College and Sir Thomas Rich’s went head to head in an absolute game for the ages at Gloucester’s Kingsholm Stadium. It could have gone either way, both sides had leads, but in the end it was Sir Thomas Rich’s that took it after a captains try from Mikey Nixon, converted by James Lilwall. It was a stunning finish to a stunning game, and you can watch it all again below.

In the Schools Plate Haileybury progressed to the quarter finals, winning their Midlands B regional final against Ipswich by an impressive 38-14 margin. Meanwhile in the Bowl Beaumont were on song, winning 21-14 at home to Culford. Over in the Scottish Schools Cup, Strathallan won a tight one to reach the semis, beating Hutchesons’ Grammar 17-13. Stewart’s Melville will join them, they two won a game of inches, beating Dollar Academy 15-12.

Outside of the knockouts there were some extraordinary, Clifton College sit proudly at the top of the NextGenXV Schools Rugby Table and will continue to do so after a stunning victory at Marlborough College, winning the Governors’ Cup in the process, and laying down yet another marker as to just what an incredible side they are.

Doing exactly the same are Harrow, who sits third in our table just a handful of points behind. They are unbeaten and playing some utterly brilliant rugby in a schedule that is proving relentlessly busy at the moment. On Thursday they kept that momentum going though with a brilliant 33-10 victory at Eton College.

Stowe were victorious at St Edward’s Oxford, but in the end the game was rather about the hosts who put in their best performance of the season to really challenge the visitors, who are one of the top teams around. In the end though, Stowe got the job done, a sign of a top side, sealing things at 27-26. Bryanston 2nd XV had it slightly easier, winning 24-0 at Wells Cathedral.