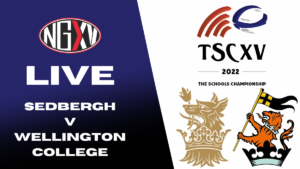 Wednesday evening sees one of the great events of the school calendar take place, Sedbergh and Wellington College meeting for a block fixture at Broadstreet RFC.

Over the years this fixture has made a habit of late drama at 1st XV level, from late kicks through Jonny McPhillips and Tom Curtis, to that sensational Ben Redshaw score last year, this year’s Sedbergh skipper, en route to the most epic of 32-32 draws.

This year it has the added spice and drama of being Round 5 in The Schools Championship, Wellington College’s final game of the Championship and Sedbergh’s second, and the winner has every chance of going top of the table.

As official media and broadcast partner NextGenXV will once again be live streaming the 6pm kick off, which will be available on our YouTube channel, TikTok, and in the embedded link below.

NextGenXV have long been associated with this fixture, and as such will also be live streaming the 2nd XV game too, as was the case last year, allowing more players, parents, and friends to experience one of the great occasions in all of schools rugby. That game will also be available on YouTube, TikTok, and embedded below and will kick off at 4.15pm, creating a real crescendo ahead of the 1st XV game.

Remarkably, that 14-10 victory in 2013 was Wellington College’s last fifteen-a-side victory over Sedbergh, although it is a slightly shorter stretch that that in terms of games due to Covid and a Mumps outbreak in 2016 at Sedbergh.

Nevertheless, this game has never been about form or past results, it is about the passion, the sheer quality, and the example of the very best of schoolboy rugby.

Add The Schools Championship into the mix, which seeks to highlight exactly those qualities, and we have yet another very special evening lined up.

It’s a first foray into The Schools Championship for Sedbergh since the opening round on the first weekend of the season, where a 46-10 victory over Whitgift got them off to the perfect start. Wellington College’s TSC campaign began in Round 2 against the same opposition, winning an epic game 29-28 to go level with Sedbergh at that stage. In Round 3 they were involved in another epic, going down 31-28 to Millfield despite a stunning comeback.

In defeat their two bonus points were enough to take them top, but a superb Millfield performance against Whitgift on Saturday, saw them reach the top for the first time. Wednesday night could see either side return to the top.

More than that though, it should provide yet more drama. Last year’s 32-32 was one of the great school rugby games of all time, perhaps the greatest that this writer has ever seen. A stunning game, and so many of the protagonists return this year.

The two teams have had contrasting seasons to date, Sedbergh winning seven of their eight games including that epic 25-24 victory at the home of the most storied school side in Ireland, Blackrock College, while Wellington College have won three and lost three of their six.

However, that’s not the full story, Wellington College picked up the Plate at the St Joseph’s Festival and defeats have come against Harrow, Millfield, and Clifton College, three of the top 5 teams in the country according to the NextGenXV Schools Rugby Table.

It has also not all been perfect for Sedbergh, who lost narrowly to Denstone College earlier this month, a first defeat to a side not called Millfield since 2016. The two groups’ U6ths have had close experiences against each other, that 32-32 draw last year, and a 29-26 Sedbergh victory at U15s, there is reason to sense another epic on Wednesday night, and with the inaugural Schools Championship nearing its close, it has plenty riding on it.

Over in the 2nd XV fixture Wellington College have happy memories after that 32-15 victory at Broadstreet last year, it’s a game that has swung back and forth, Wellington winning last year, a draw in 2019, Sedbergh wins in 2018 and 2017, and a Wellington win in 2015.

This year Sedbergh’s 2nd XV are flying, winning six from six including defeats of Kirkham Grammar School and Denstone College. As at 1st XV level it’s been harder for Wellington, winning 2 and losing 4 of their 6, but their fixture list is brutally difficult. They have also been involved in some epic, 24-21 with Whitgift, 32-50 with Millfield, and the tightest of games at Seaford College, 5-6.

The reality is though that Sedbergh v Wellington College, at any level from U14 to 1st XV, is about so much more than the outcome. It is about one of the great events in all of school rugby, it is about all that is good about school rugby, drama, history, passion, pride, enjoyment, and two teams that will – whatever the weather – come out to play rugby in the most exciting fashion imaginable. Ambition will be in no small supply, and that’s what it is all about.