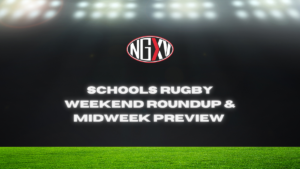 Frozen pitches forced the cancellation of much of the weekend’s action, but it looks as though a busy midweek of rugby is going to help to make up for it, including the second Live Streamed game of 2023 here on NextGenXV.

The week also sees the start of 10s and 7s season, with the Mount Kelly 10s on Wednesday, followed on Sunday by the live streamed Seaford 10s.

Friday night saw some great contests, Samuel Whitbread Academy and St Joseph’s College went head to head in a fantastic game in Bedford, with Samuel Whitbread coming out on top but by a slender 24-12 margin.

Even close was Bromsgrove U17s 12-5 victory in their annual classic clash against KES Birmingham, a well contested game with silverware on the line. Old Swinford Hospital were meanwhile in stunning form on Friday in a brilliant 46-12 victory over Gordon’s, who will be live on NextGenXV this Wednesday as they kick off their NextGenXV Spring League campaign against Reed’s.

Saturday saw almost all of the anticipated action cancelled, however St Benedict’s were still able to host St George’s Harpenden and put in a quite outstanding performance for a 52-17 victory. Kirkham Grammar School’s U17s were also in fine form in a 40-22 victory over Bablake & King Henry VIII.

St Benedict’s are quickly back in action, taking on RGS High Wycombe on Tuesday in a game that evokes real memories of school rugby in the 2000s. It promises to be a great contest.

Sedbergh U17 v RGS Newcastle U17

Assuming that the weather holds out, Wednesday looks like being the busiest day of schools rugby of 2023 so far. NextGenXV will be heading to Gordon’s to live stream their NextGenXV Spring League game against Reed’s. The two are a mere half an hour apart, so there should be real local rivalry and a fantastic atmosphere in this first year of the NextGenXV Spring League.

There is County Cup action as Westcliff High take on Brentwood in Essex, while outside of the County Cups there is a huge amount of fantastic rugby going on.

Samuel Whitbread Academy take on Hartpury College Bulls, who have really spread their wings. Both sides recently beat St Joseph’s College, who are also in action this Wednesday against Bishop’s Stortford College.

Whitgift are back in action with an exciting fixture against Hayes, while Hampton host London Oratory, a game that should prove to be plenty of fun. Elsewhere in the area Gunnersbury host Harrodian and Tiffin head to Latymer Upper, while Oakwood Park are at Wilmington Grammar.

KES Birmingham are back in action after their game on Friday night, taking on Bishop Vesey’s Grammar, while Queen Mary’s Grammar are at Newcastle-Under-Lyme. Meanwhile into the North West Stonyhursthost Rishworth and Scarisbrick Hall welcome Runshaw College. In Yorkshire ACE side Bishop Burton College are in action at Hill House.

Being the Spring Term, there is also plenty of U17 action, and another massive game involving an ACE side as Gosforth Academy U17s take on Woodhouse Grove U17s in what should really be a fantastic game of rugby.

So too should Sedbergh U17 v RGS Newcastle U17, two exciting young groups of players going head to head at one of the great venues in the school game. It will be one to get along to if you possibly can. Further South KES Stratford and Princethorpe College go head to head at U17 level, while in the South West St Peter’s Gloucester and The Crypt meet with their U17s.