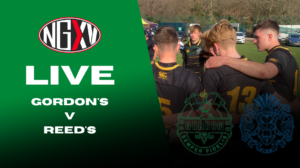 Gordon’s and Reed’s meet in a live streamed 2.30pm kick off on Wednesday for the second game of the inaugural NextGenXV Spring League.

The game will see the two Surrey sides go head to head for the first time since 2019, and you will be able to watch the whole game live here on NextGenXV, either through our website or the embedded link below.

The NextGenXV Spring League was set up to allow opportunities for players through this Spring Term, and Gordon’s artificial surface is another string to that bow – allowing play despite freezing temperatures of late.

Spring League kicked off on Friday 13th January as Eastbourne College and Hayes School met at Horsham RFC. Hayes won that one 34-26 to get off to a perfect start.

Gordon’s will be meeting Hayes next up, while Reed’s next face Eastbourne College, Glyn complete the section though unfortunately their opening game against Eastbourne College last week was lost to the weather.

The focus is all on Gordon’s v Reed’s on Wednesday though, Reed’s won that meeting in 2019 21-0. Since then though plenty has changed, Gordon’s have joined the ACE league with a side playing in that Premiership Rugby Academy affiliated league and another side playing the schools traditional fixtures – this will be that side on Wednesday.

Despite their close proximity, they are only half an hour apart, the two sides have just the one common opponent this year, Reigate Grammar School. What bodes well from that though is that their results suggest that we should be in for a tight game on Wednesday. Gordon’s won 14-5 while Reed’s won 22-20, both tight games that suggest a close one between the two.

It will be Reed’s first game of 2023, their last game was actually that victory over Reigate back in December, Gordon’s got the year underway on Friday against a very strong Old Swinford Hospital side, 46-12.

That will have them hardened up for Wednesday though, and what should be an absolutely fantastic game of rugby between two great Surrey Schools, launching the NextGenXV Spring League on camera in style.