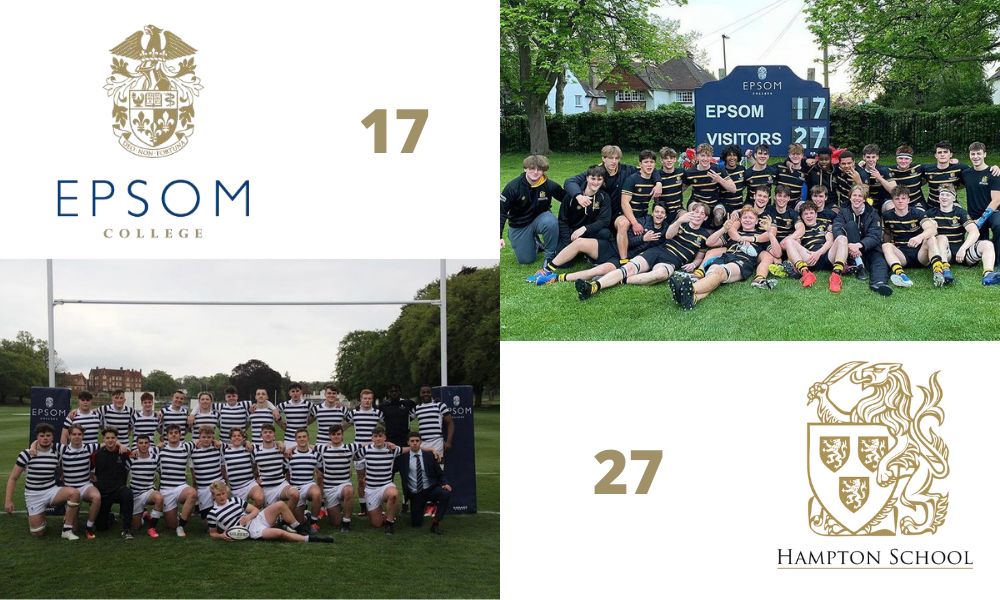 Friday evening saw Epsom College host Hampton in an epic game of schoolboy rugby, reminding us all what we have missed in this Covid disrupted 2020/21 season.

Hampton closed out as 27-17 winners, a magnificent performance against a superb Epsom College side, but this game was all about the efforts of the players of both sides, the sheer joy in playing again, and a game that was as good a showcase for school rugby in this country as there could be after 433 days since the last live streamed game.

Both sides had some outrageously good performers, led by Hampton hooker Rupert Reddish, who almost lost his membership to the front row union after scoring a hat-trick. A cumulative scoring distance of about three yards perhaps just about keeping him in the club.

In scoring, though, Reddish displayed the passion that exemplifies what school rugby means to each and every individual involved in it, the passion that really is the very purpose of these games in this four week window of school rugby that is the 2020/21 season. As his Director of Rugby, Sean Thomson, said after the game:

“It means so much to them to run out for their school and to be able to pull on their school shirt. Whether it’s seven years or five years that they’re at the school, they’re playing with their mates, they’re going to school with their mates all day every day, and then to get to run out and sort of go to battle with them is a pretty special thing.”

“You can see what it means to them today, you can see the way they celebrated that they enjoyed every single moment of it. It means a huge amount. I think you almost don’t get that feeling anywhere else, whether that’s with University or playing club stuff when you’re older, playing with your mates at school is just such a special feeling.”

It was a sentiment shared by Epsom College’s Director of Rugby, Paul Burke, who said:

“It is (a special time), it’s our last home game now for the boys that are leaving. They’ve put so much time, effort, and commitment into Epsom College rugby. Getting it live streamed to all the parents, who unfortunately are unable to attend, it’s us doing our bit as a school to thank all the parents and the boys for their efforts. I’m immensely proud of all the boys and especially those boys in the Upper 6th who have had a really disjointed year from a rugby point of view and haven’t had the opportunity to play as much as they should have.”

“I take my hat off to them. When you haven’t got a game at the weekend it’s incredibly tough to stay motivated but it’s a really good bunch of boys that love their rugby and having the opportunity to play these matches is just fantastic for them.”

Every one of the 41 players deserves huge praise, and a shout out should go to Epsom College’s William Swan, Rhys Day, and Charley Redknapp, who all made their debuts, similarly Connor Cross for Hampton, playing just his second game of rugby for the school.

Pre-game the contest between the two captains and fly halves, Jamie Benson (Hampton), and Tom Lynagh (Epsom College) was billed as being a likely showstopper, and it certainly did not disappoint. Benson, who seemed to be playing almost as though everyone else was in slow-motion, producing a moment of magic to create Hampton’s second try as he burst through the defence before slowing up the last man with a double-pump pass to release the deceptively fast and hard working Lucas Mangham to score. It added to Reddish’s first try which, along with a Benson penalty, gave Hampton a 13-0 lead 18 minutes into the game.

Lynagh, meanwhile, landed a penalty and was causing carnage with his high bombs, which appeared to be returning to earth like a stray asteroid. He produced a telling contribution at the end of the first half as a pin-point cross field kick release Bryn Bradley, who like Lynagh had an older brother at Hampton now playing professional rugby, down the right touchline. Bradley, as he did all game, showed huge power and a deft touch to release his fellow vice-captain Ollie Matthews, the start of a move that resulted in blindside flanker Olaiua Adeniji scoring a bulldozing try that would send the teams in at half time with Hampton leading 13-10.

It was part of a period either side of half time that was probably Epsom College’s strongest, with Bradley and number 8 Kade Bird stepping up physically in an immensely impressive way. With Burke paying tribute, saying: ”I thought Kade put in a big shift, he put in some really big tackles in the defensive line, got himself back up, and he carried well too. You know what you’re going to get with Bryn he’s strong, he’s explosive, he’s got a really deft offload and he just puts it in for the boys. But across the whole side, to a man, I was really impressed with their effort…it was just a great showpiece for schoolboy rugby.”

A great showpiece it certainly was, and having held firm through that Epsom purple patch, Hampton grabbed hold of the momentum again, with the energizer bunnies Toby Robinson in the back row and Tim Lamming in the centres, really helping to seize back momentum.

In the face of the physicality of the likes of Bird, though, one man in particular just kept coming back for more – Rupert Reddish. With twenty minutes left to go he smashed his way over the try line for his second, extending a telescopic arm for a powerful yet deft finish. He was at it again ten minutes later to push his side out to a 27-10 lead and with it claiming his hat-trick, fitting reward for a superb all-round performance, one that meant a particular amount to him having told Thomson that “he thought he had played his worst ever game, against Whitgift last week”.

Thomson’s advice after that was to “go out and do the simple things well and you’ll be alright”, advice Reddish clearly heeded as he time and time again put his hand up to carry, yielding those three tries, got the ball through his hands when the call came, and put in a huge defensive shift.

For a spell a comeback looked on, with six minutes to go replacement George Morley crashed over on the ‘Reddish line’ for Epsom College to bring the game back to 27-17 with Lynagh’s conversion, but time was against the home side and Hampton’s sheer determination and quality. was just never going to allow a collapse.

As with all games in this period, though, in reality the score was merely a tool with which to provide a pattern for the narrative of the game. The real story was that the 41 players that took the field could take the field, that there was a game of any sort. The last year has denied so many the opportunity, school rugby is special anyway but these games are doubly so. Triply so. That it was a cracking game with both sides playing so well was simply a delightful bonus.

Perhaps it is best left just with the words of the two coaches, two men whose understanding of what these games mean to their charges is spot on, whose appreciation of why showcasing these games is important was heart-warming.

Paul Burke: “I thought it was a cracking game of schoolboy rugby. Full credit to both teams, I thought both teams played their part. Hampton are a really good side and I thought our boys went toe to toe.” “The boys have worked incredibly hard through the Covid times, their attitude to training and every session that we’ve had, they’ve been spot on.” ”It’s just a shame we didn’t get the season we wanted to, but that’s life, we’ve had a really good couple of games against some fantastic opposition and hopefully everyone at home has really enjoyed that game tonight.”

Sean Thomson: “That was fantastic, to be honest it was just nice to come down here and the boys played absolutely fantastically and really enjoyed it but I think more importantly it’s just the opportunity to give these boys some games having played nothing all year. I heard Paul talking there, and it’s how hard they’ve worked all year, it’s been really really tough for them and they’ve kept having to turn up week in week out and train, and they’ve just wanted to get out and play some rugby. So to play like that is fantastic to see, but what’s even better is that we’ve still got a couple of games to go and they are thinking about how we can improve. It is awesome.”

PrevPreviousStepping Up: Checking in on the U21 players in the Rainbow Cup
NextOur First Points Based Top 20 (16 May 2021)Next