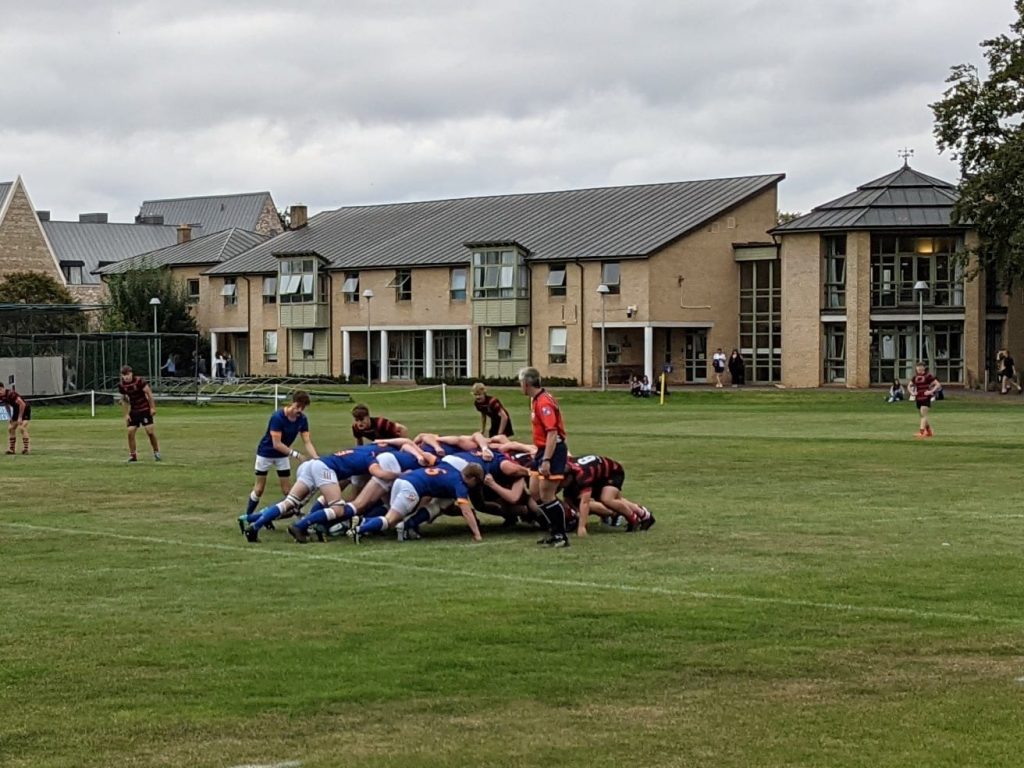 The Oxford derby was a closely contested affair, with St Edward’s School well worth their ten-point lead at halftime, but unable to resist late pressure by Magdalen College School

With these two schools separated by only a couple of miles, it was no surprise that there was a large and enthusiastic crowd on both touchlines as the visitors kicked off with the Upper 1 pitch beside the Woodstock Road bathed in late September sunshine.

After opening exchanges in midfield, Teddies were the first to gain an attacking field position. The kicking game of fly half Charlie Mason, still an U16, was to be a significant tactic for the home side, and a succession of well-placed kicks led to an attacking line-out in the left corner. Although the MCS defence was able to recover possession and clear, full-back Hamza Ali ran back the kick to maintain pressure inside the 22. Again, MCS were able to regain possession but following a charged down kick they were forced to concede a penalty, kicked to the left corner by Mason. With possession secured from the ensuing line-out, tight head prop Egor Varivoda forced his way over for the opening score, Mason adding the extras.

The home side soon extended their advantage. After a strong carry by No 8 Guy Wheeler had secured the exit from the restart, MSC were penalised on their 10m line for not rolling away and Mason was on target with his long-range kick from the tee. MCS worked hard to get back into the game, choosing to run a penalty with inside centre Elliot Rees linking with captain and No 8 Woody Blakesley-Grimes and second row Louis Barnes winning the subsequent line-out ball. Although MCS were starting to enjoy a greater share of possession, another charged down kick led to Teddies gain possession on the MCS 22, but an interception by Benjamin Castella McDonald saw the MCS hooker break clear. A try was only prevented by an excellent tackle by the last defender and MCS were penalised at the breakdown, enabling the home side to clear.

The first half closed with both sides having scoring opportunities. MCS, having won a penalty on half-way, kicked to the right corner. Barnes was again secure at the line-out, but possession was lost, and Mason got the clearance kick away. Mason’s tactical kicking put further on the defence, but MCS held out and half-time was reached without further addition to the score, which on balance reflected the balance of play

MCS were quickly on the offensive following the interval with an excellent kick to the right corner, well defended by Mason and replacement wing Roshan Mowat running back a clearance kick. MCS, line speed was also having an increasing impact. Although suffering another charged down kick MCS recovered possession and strong running on the left by full back Hugo Robathan kept up the pressure. A discernible change in momentum was building and Blakesley-Grimes having an increasing impact, linking effectively with Rees to take play deep into the St Edward’s 22, where the MCS captain was forced into touch. A high-risk approach was taken at the ensuing defensive line-out with a long throw to the tail taken by centre Oliver Sedgwick and a clearance made by Mason. However, the pressure was maintained as Barnaby Carey (now playing on the right wing) and Mowat carried strongly. Repeated drives to the line in the left corner finally resulted in Blakesley-Grimes crashing over and Rees adding the conversion.

The visitors were now rampant, moving the ball through the hands from the restart and Robathan making ground on the left before offloading to Mowat who scored under the posts, Rees converting to out MCS ahead. Teddies worked hard to counter from the restart, forcing a turnover and winning a penalty. Again, the decision was made to take the points and Mason produced another splendid long-range kick from the tee.

Despite their lead being narrowed to a single point, MCS continued to maintain pressure, winning a scrum inside the St Edward’s 22, from which Blakesley-Grimes picked up and broke through tackles before scoring his second try. Rees’ conversion attempt was unsuccessful. The home side were not finished, winning a penalty, kicked to the right corner. A short throw at the ensuing line-out looked to enable the powerful Varivoda to force his way over, but a free kick awarded to MCS who were able to clear.

After an exchange of kicks, MCS won a penalty on halfway and pressure on the left led to Blakesley-Grimes driving close to the line, but the try was not given. Although the ensuing defensive scrum was won and a clearance kick made, MCS moved the ball quickly from the line-out, creating an overlap for Carey to score in the right corner. Although the difficult conversion was missed, with only three minutes to go a two-score deficit was unlikely to be overcome. Despite that, St Edward’s worked hard for a final score, forcing a penalty at the restart and kicking to the right corner, but MCS were able to recover and clear.

This was a thrilling finish to a classic local clash. St Edward’s looked clear favourites at halftime, but MCS upped their physicality in the second half and fully deserved the win. The two sides could potentially meet again next month in the National Vase, Midlands B Division if MCS can get past Aylesbury GS in Round 2.