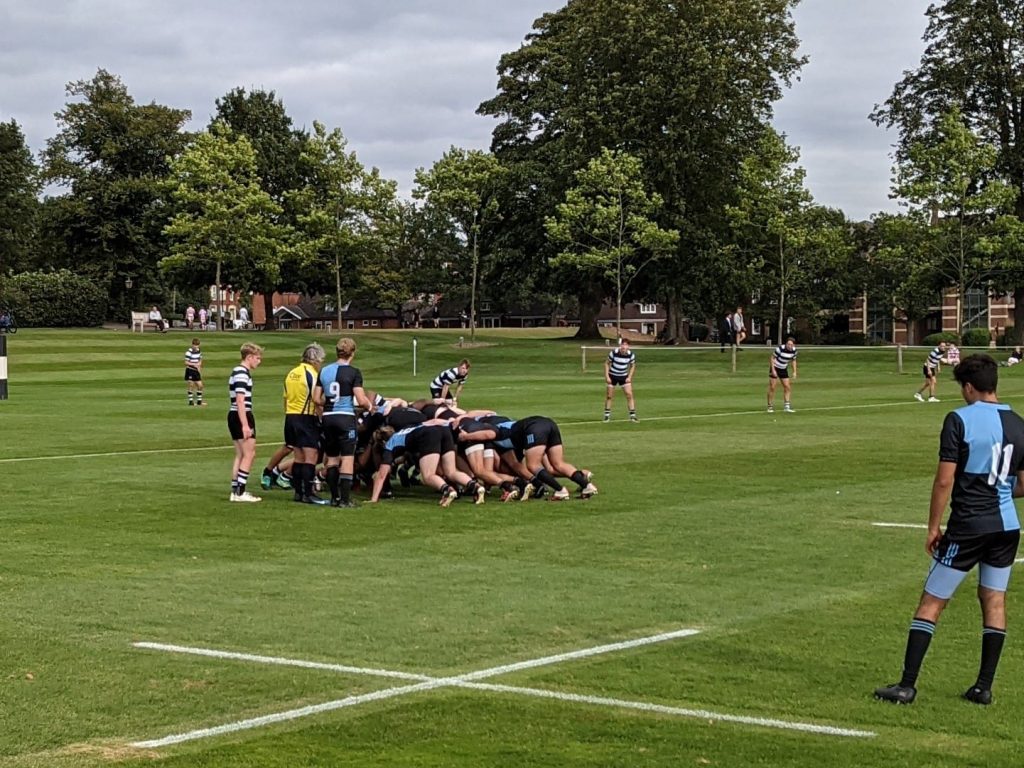 Both schools had enjoyed winning starts to their season going into this traditionally keenly contested block fixture, Tonbridge having defeated St John’s Leatherhead and local rivals Judd, while Eton had recorded victories against John Fisher and Marlborough. Conditions were excellent as Eton kicked off with the slope advantage, the Fifty looking splendid in the late September sunshine as the earlier cloud clover was dispersed.

Eton enjoyed some early possession in midfield, going through several phases, but the defence held firm and forced a handling error. From the ensuing scrum, Tonbridge kicked to the Eton 22 and although the Eton scrum-half looked to run back possession, a penalty was conceded and kicked to the left corner. With the line-out won, a maul was set up but was stopped and quick ball into midfield from the breakdown came to outside centre Charlie Thompson, finding an excellent line to break through the defence and crash over close to the posts. Fly-half Jack Jones added the conversion.

The home side had another opportunity when Eton were again penalised on halfway and an attacking lineout was set up on the left, but a knock-on gave Eton a scrum, from which their scrum-half ran strongly on the blindside, Although possession was temporarily lost, good field position was maintained by Eton and first phase ball from an attacking scrum on the Tonbridge 22 saw their outside centre slice through the defence and dive over on the right The conversion attempt was unsuccessful.

Tonbridge came close to extending their lead when Eton were penalised at the restart and play was taken close to the Eton line, but a turnover was forced and play was gradually taken back to halfway, with Eton enjoying an increasing share of the possession. That was turned into a territorial advantage with play taken to the Tonbridge 22, but a turnover saw the ball come to full back Joe Baldwin who accelerated past would-be tacklers on the left before cutting through in midfield and throwing a well-weighted long pass to Thompson on the right. Although he was stopped, play was taken on through the forwards deep into the 22 and hooker Jacques Bowkley forced his way over on the left, Jones again converting.

The Eton scrum continued to look very solid in the set-piece, but it was Tonbridge’s pace in the backs that brought the next score. Good hands on the left created space for Baldwin to take the ball at speed and step past several defenders to score. Jones was again on target from the tee with the difficult conversion. The halftime whistle beckoned but Baldwin wasn’t finished. After an Eton handling error on halfway, first phase ball from the ensuing scrum came to Baldwin on the left and he again stepped past defenders before delivering a pass just short of the line to left-wing Toby Lee-Amies who dived in at the corner. Jones’ touchline conversion was beautifully struck and right on target.

Following the interval Thompson, Baldwin and Lee-Amies combined effectively to take play up to the Eton 22, and although a good turnover by Eton gave them the chance to clear, their kick was run back by Baldwin and the defence forced to concede a penalty, kicked to the right corner. Another Tonbridge score seemed in prospect but good work by the Eton forwards saw them win back possession and run out of defence before a kick from their scrum-half completed the clearance.

Eton were finding it hard to gain possession inside the Tonbridge half, despite some mazy running by their fly-half and a kick through gave Tonbridge another attacking line-out in the left corner. Although they were once again unable to capitalise on that, conceding a free-kick, they were able to win the next line-out and set up a big maul, taking play to the Eton 22, where Thomson and Baldwin again combined. Although the full-back was stopped, the Referee judged the tackle to be high and signalled that penalty advantage was being played. With a “free ball” available a well-weighted cross-kick was directed to the left corner but Lee-Amies was unable to gather it, so play came back. With the ball again kicked to the corner Tonbridge this time made no mistake from the ensuing line-out and set up a maul that took play to the line, second row Caspar Bagnall-Walmsley touching down. Despite the difficult angle, Jones again added the extras.

The pace of the game had been taking its toll and both sides went to their benches or the 2nd XV pitch for replacements. Eton began to get on top in the forwards and good hands on the right saw their right-wing come close to scoring, but a turnover gave Jones the chance to run out of defence and he showed tremendous pace to reach half-way where his pass to Lee-Amies was judged to be forward. The Eton replacement centre then made ground into the Tonbridge 22 and the pressure was maintained until the scrum-half crashed over close to the posts, the Eton outside centre adding the conversion.

With both sides tiring, play started to open up and the Eton replacement centre again showed impressive pace on the left. The pressure was maintained in the left corner and Eton gained their third try, with their placekicker landing the touchline conversion. When Eton were penalised following the restart Tonbridge looked to calm things down by going for three points but Jones’ kick for once drifted wide. Any disappointment was short-lived as Jones cut through the defence and scored by the posts. Although the conversion was missed, with on;y five minutes on the clock the deficit was back to over 20 points.

Although the game was now clearly lost, Eton managed to finish strongly, forcing a penalty that was kicked to the left corner. With possession won from the line-out, the Eton tight head made ground, but play was stopped for an injury. From the scrum that followed, the Eton scrum-half was stopped just short but managed to get an offload away to the tall second-row forward who used his height to stretch for the line. The conversion was good but the was no more time for further scores as the Referee blew for the end of the game.

Tonbridge face another local Derby against Skinners’ before completing a tough schedule: Radley, St Paul’s, Harrow, and Dulwich, all leading up to their traditional end-of-season fixture against Wellington. Those should be fascinating contests, given especially the pace and flair that they have in the backs. Eton’s remaining fixture list is also testing, including some of the same opponents. With their powerful forward pack and the resilience that they showed to fight back from a significant points deficit, they will be competitive.