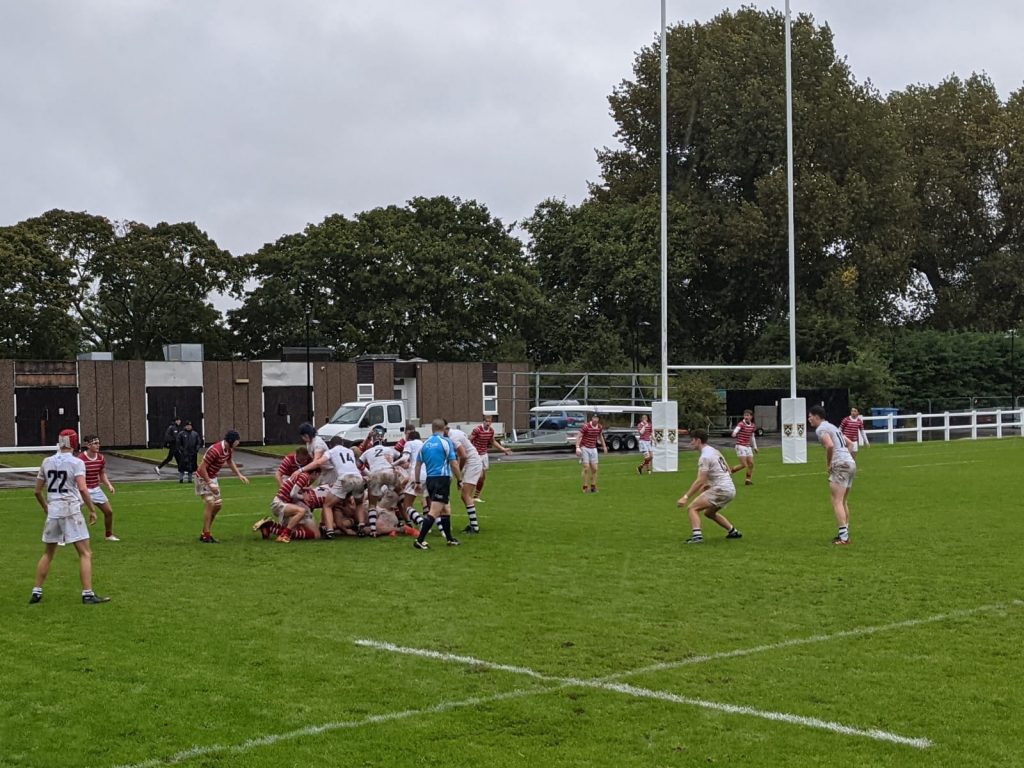 Radley College made the most of limited opportunities inside the opposition 22, scoring four tries, and resisting sustained pressure from St Paul’s School, and were deserved  28-17 winners of a game played in torrential rain.

This is an always closely contested block fixture in the strong circuit on which these two schools play. In recent years the Barnes-based school has had the upper hand at 1st XV level, but Radley came to this game with an unbeaten record this season, including a win against a strong Sherborne side and a midweek Cup victory over Henley College. St Paul’s had also been looking useful with a comfortable win over Campion and only losing to Epsom College by the narrowest of margins.

The weather forecast had been getting progressively worse in the days leading up to the game and sadly the conditions were as predicted with heavy rain starting to fall shortly before the visitors kicked off.  Two partially charged down kicks meant that St Paul’s exit was difficult and they were quickly penalised on halfway, enabling Radley to set up an attacking lineout on the left. Clean possession was duly won and a driving maul took play close to the line. Although progress was stopped, the ball was swiftly moved to the backs and centre Rory Fletcher found an excellent line to cut through the defence before offloading to front row player Antonio Perez Quane who crashed over. Full back Benji Tucker added the conversion.

St Paul’s set about overcoming this early setback in a similar fashion, forcing a penalty from the restart and kicking to the left corner. A period of sustained pressure on the Radley line ensued, with the St Paul’s forward pack getting the ball over the line, but unable to ground it and Radley gained some respite with a drop-out from their goal line. This proved only temporary as another penalty allowed the home side to kick to the left corner again. Although a turnover gave Radley another chance to clear, St Paul’s full-back Jack Taylor combined well with centre Louis Wilson and a well-weighted grubber to the 22 forced Radley to concede yet another penalty, prompting another period of pressure on their line.

The chance to get points on the board had been eschewed and St Paul’s may have regretted that decision when Radly finally broke out with good handling on the right and then switching play to the left corner, where another effective maul took play close to the line. The defence looked to have held firm but a piece of individual brilliance gave Radley their second try when the ball came in midfield to fly-half Ollie Donald who put in a beautifully weighted grubber kick behind the defence and collected it himself to score close to the posts, Tucker adding the extras.

The home side prevented a clean exit from the restart and soon forced another penalty. This time the decision was taken to go for the points and fly-half James Beverley was on target from the tee. Having seen their lead reduced, Radley were quickly back inside the St Paul’s 22 when the referee judged a St Paul’s player to have illegally gone off his feet at the breakdown, and the resulting penalty was kicked to the left corner, This time the maul proved unstoppable and the ball was kept in the forwards, flanker Ollie Mordaunt getting the score. The conversion from wide out was a difficult one but Tucker’s kick was beautifully judged and drawn in between the posts despite the tricky wind.

An earlier injury meant that there was plenty of stoppage time to play and St Paul’s made excellent use of the final seconds of the first half, forcing a penalty in the left corner. Pressure on the Radley line through the forwards continued, and with the referee signalling a penalty advantage Beverley used the free ball to try a cross-kick to the right That was unsuccessful so play came back for the penalty and this time the referee went to his pocket for a yellow card. St Paul’s capitalised on the man advantage and No 8 Julius Turley drove over. With Beverley landing the difficult conversion, the scoreline took on a different look as the referee blew for half time.

With the impact of the torrential rain taking its toll, both sides struggled to achieve some structure to their game as the second half opened, with a lengthy injury stoppage further disrupting the flow of play. The slippery ball was clearly both causing handling errors and making possession at the line-out difficult. The Radley forward pack put in a big shove at a St Paul’s scrum but were judged to have pushed too far. The Referee surprisingly appeared to award a penalty and St Paul’s had the throw-in at the ensuing line-out, winning possession and moving the ball into midfield where Wilson made ground towards the posts, but excellent work at the breakdown by second row George Dennis forced a turnover, relieving the immediate pressure.

The territorial advantage continued to be with the home side, with relieving kicks to touch by Donald twice ruled to have gone straight out after possession had  been taken back into the Radley 22. On the second of those occasions St Paul’s set up a maul from the line-out and flanker Dominic Fitzpatrick broke close to the Radley line and did well to get away an offload, but again the defence forced a turnover and Radley cleared to half way. St Paul’s looked to salvage some points from this period of pressure when they won another penalty, electing to have Beverleykick for goal but the fly-half’s effort fell short and a long clearance kick took play back to half way.

Tucker continued to show that his place kicking was matched by his defensive skills, fielding a tricky grubber kick by Beverley and the Oxfordshire side began to enjoy better field possession. It was then the home side’s turn to suffer from a clearance kick from outside their 22 going straight into touch, and Radley had an attacking line-out on the left. Once again the driving maul proved decisive and second row Cameron Tasker got the touchdown in the corner. By this stage it was no surprise to see Tucker successful with the touchline conversion.

Although time was running out, St Paul’s were not finished. Although Radley had the throw to a line-out on the right, they continued to have difficulty in winning their own ball and St Paul’s made good use of the opportunity. A strong carry by Turley forced the defence to concede a penalty and the ball was quickly moved through the hands on the right with centre Alex Pama cutting through to score under the posts. The conversion was taken quickly by drop-kick but there was no more time as the Referee blew for the end of the match.

The conditions undoubtedly had an impact on the pattern of play, especially in the second half, though both sides did well to maintain a high standard of play. Radley managed to turn every visit to the St Paul’s 22 into points and withstood lengthy periods of pressure on their own line. The home side competed well and kept the result in doubt until late in the game despite there being a big deficit with only seconds of the first half left. Both schools face quality opposition in the next round of the National U18 Cup, St Paul’s facing unbeaten South-West London neighbours Hampton School.  Radley are due to host Berkhamsted, also unbeaten, and will hope to have skipper Toby Thame and hooker Harry Silman available for that game, though the efforts of the players on the field in this game are indicative of the strength of their squad.