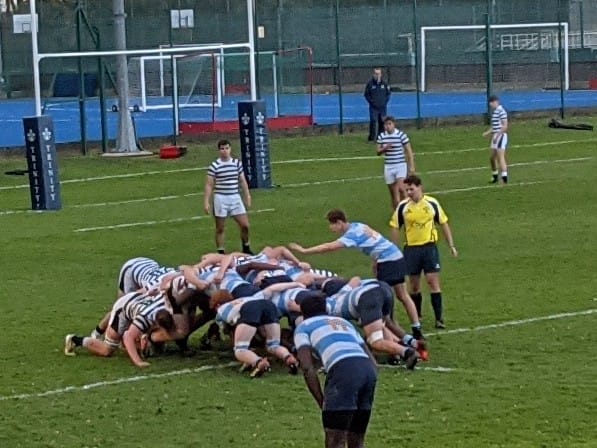 Two early tries for Trinity School Croydon left Epsom College playing catchup, and the home side overcame a high penalty count to build their advantage to 35-16 by full time.

These two schools are based only a few miles apart and have a number of common opponents but rarely play each other, so this was a fascinating Cup match-up. The visitors came into the game unbeaten, with wins over St Paul’s and Hampton, but had not played a fixture since mid-October having had a bye through the second round of the Cup. Trinity had lost to Cranleigh and Brighton College, but had progressed through two rounds of the Cup including a win over Newman Catholic College who had put out John Fisher in the first round. Mild temperatures and a light breeze meant that conditions were ideal for open rugby.

Trinity kicked off and enjoyed early territorial advantage, despite conceding three penalties. After a break on the left by long-striding wing Seun Ogunyemi, play was switched through the hands to the right where a grubber was almost regathered for an opening score, but the ball went forward giving Epsom a scrum. No 8 Lucas Schmid picked up from the base and forced a penalty, kicked to touch by fly-half Sam Waugh. Possession was won from the ensuing line-out, but two charged down kicks by Waugh kept Epsom inside their own half and when Epsom were penalised at a scrum Trinity full-back Josh Bellamy looked to open the scoring from the tee, but the kick drifted just wide.

Bellamy took advantage from the resulting 22 drop-out, spotting the chance of a 50:22 and giving Trinity an attacking line-out on the left. Epsom continued to struggle to break out of their half and, despite winning another penalty, were unable to secure their line-out ball, giving Trinity the opportunity to move the ball through the hands deep into the 22 but a handling error gave Epsom the put-in at a scrum. Again, Schmid picked up from the base, but when the ball came back to Waugh, his attempted clearance kick was charged down, and the loose ball was gathered by scrum-half Finlay Kennedy who touched down to open the scoring, Bellamy adding the extras from the tee.

The restart was powerfully run back by loosehead prop Kane Fleary but Trinity’s woes at the breakdown continued, referee Max Marshall awarding another penalty. Although Epsom secured possession from the line-out, turnover ball was seized by fly-half Conor Byrne who burst through in midfield and raced into the 22 before offloading to inside centre Bertie Little who found Joe Connolley in support and the second-row crashed over on the left, Bellamy converting.

The home side managed a safe exit from the restart, but a sixth penalty gave the visitors the chance to get on the scoreboard and inside centre Josh Lyon took the points from the tee. Epsom had difficulty in securing Bellamy’s excellent restart and the loose ball was claimed by flanker William Peart-Smith and play taken into the 22 on the right but the final pass was dropped. Three more penalties in quick succession enabled Epsom to regain field position and from the last of these, Lyon was again successful from the tee to narrow the gap.

Further good work by Peart-Smith at the restart enabled Trinity to put pressure on the Epsom line and after a long penalty advantage had been played Trinity eschewed the chance to go for goal, opting for a scrum. Although possession was won, good defence by Epsom enabled them to clear, but Bellamy showed his running skills finding Ogunyemi who then offloaded to flanker Khahlil Alleyne. Another score looked on the cards, but a handling error saw the interval reached without further addition to the scoreboard.

With the game still balanced, the first score after half-time was going to be pivotal. Epsom had made some changes, with Kade Bird coming off the bench at No 8 and taking on a leading role as ball carrier, but it was the home side that gained the advantage. After an exchange of kicks, a lineout on halfway gave Trinity possession and first phase ball was moved through the hands into midfield where Bellamy cut through at pace and stepped past several attempted tackles before scoring on the left and adding the conversion. Although Peart-Smith again seized possession from the restart and looked to release Ogunyemi, Epsom were able to recover possession and won another penalty which Waugh kicked deep into the right corner. With line-out ball secured, the Epsom forwards looked to drive over, but excellent defence kept them out and forced a penalty.

The Epsom pressure was maintained, as Bellamy’s kick did not find touch and was run back by Schmid before play was taken on into the 22 by the backs and another penalty was conceded by Trinity, kicked to the left corner. Once again, the maul was set up but was stopped by good defence and Epsom penalised. The previous pattern continued, with touch missed on the clearance kick, Schmid running it back and Trinity penalised, this time drawing a warning from Mr Marshall.

Epsom chose to kick to the corner and the maul was set up but again the Trinity defence was equal to the task, forcing a turnover which was run out by Bellamy. As the full-back reached the half-way line another spectacular try looked a possibility, but he was unable to regather his kick ahead and Waugh took the opportunity for a 50:22 to force yet another Epsom attacking lineout on the left. After Trinity were penalised at the ensuing maul, another lineout deep in the corner finally produced the desired result for Epsom, with hooker Rhys Day forcing his way over. The conversion attempt was unsuccessful.

With the lead narrowed to within two scores, there was a potential glimmer of hope for the visitors, but that was quickly snuffed out. After Epsom had cleared to half-way from the restart, Trinity used the line-out to set up a tremendous driving maul which trundled inexorably into the 22 with penalty advantage being signalled, before being taken down 5 metres short of the line, Mr Marshall going to his pocket for a yellow card. Once again there was some nervousness from the Trinity supporters when it was evident that the straightforward three points on offer would not be taken, a kick to the corner being the chosen option, but they need not have worried as another successful maul saw hooker Ross Sinclair get the score and Bellamy continue his run of successful conversions.

The momentum was now back with the home side, who twice came close to scoring again from the restart but were frustrated, first when a final pass was judged to be forward and then when Epsom lost a scrum and a clear overlap on the left was not exploited. However, the pressure quickly brought a tangible reward when Byrne ran back a clearance kick, and the ball was recycled to him. The fly half showed outstanding pace to break through the line and stepped past the last defender to score close to the posts, Bellamy converting.

Although the lead was now insurmountable, Epsom worked hard for another score, kicking a penalty to the right corner and then putting sustained pressure on the Trinity line and winning successive penalties, which were run, Bird making some hard yards before finding flanker Jude Clark who squeezed in at the corner to complete the scoring.

Trinity will host the winners of the St John’s Leatherhead vs Whitgift tie in the next round, though they will first need to regroup and face Hampton (also involved in the Cup this week at Dulwich) in the block fixture. With the ability to strike from deep through the running and footballing skills of Byrne and Bellamy, they will be a threat to any side, though they must address their discipline at the breakdown and were arguably fortunate to play the whole game with 15 players on the field. Epsom face some tough block fixtures, including Cranleigh, Brighton and Harrow.