Wes Chetty Interview: The Man Behind the Scenes 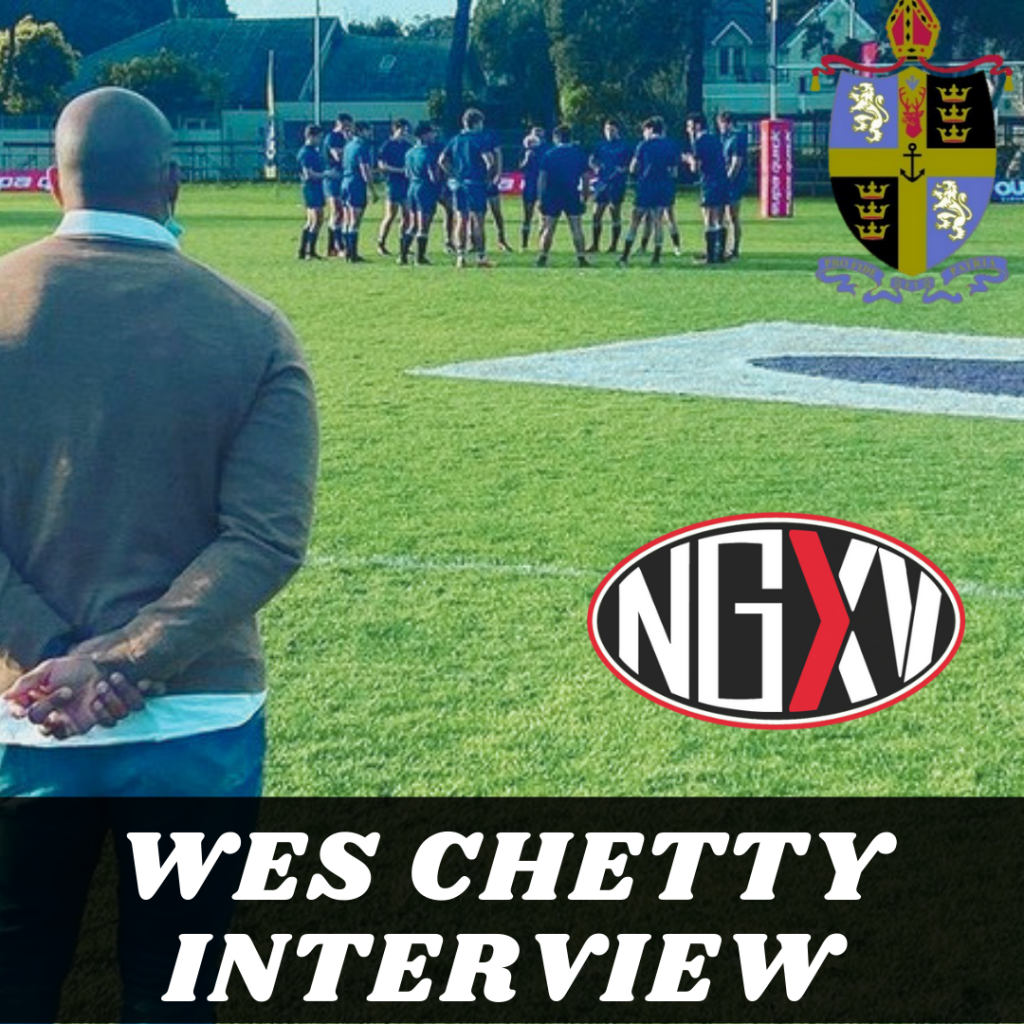 Bishops have one of the most illustrious histories of any school not only in South Africa but the world. One of the top Springbok producers in the country the Southern Suburbs giants had a lean few years in the last decade but came back with a bang with the teams of 2020 and 2021 looking dangerous!

The man behind the scenes alongside director of rugby Dave Mallet is Wes Chetty, an old boy and highly rated young coach who is the talk of the town at the moment. What we encountered is a man who has been through the South African club and Varsity system and is determined to forge his own destiny.

We have a feeling that the Wes Chetty story has just begun and we are excited to see what the future brings this exceptional coach whose proteges such as Connor Evans and Sacha Mngomezulu are already making waves in their first year out of school.

Wes, firstly congratulations on a solid season, despite it being cut short there was enough to see that this is a well coached and well drilled outfit. What has been in your opinion the key to success as a coach thus far?

Thank you, your words are appreciated. Top young men buying in completely to the rugby program and understanding what goals the program wants to achieve. We work incredibly hard as a team and that allows us to express ourselves, it’s no secret that Bishops attracts the top talent and when you add hard work, values, being a good Bishops man in and they will be successful.

For me personally I love stealing this quote from one of my favourite coaches Jill Ellis (Former USA Women’s football coach) ” I don’t coach for a paycheck, I coach what I believe“, I honestly can tell you, that is what I do, I want to coach what I believe, I don’t want to copy paste things, I want to tweak be creative and during the week push myself to give the lads the tools to be the best version of themselves.

2020 and 2021 were two of the best teams we can remember for a while, it must of been disappointing to have both seasons cut short. In our opinion there was no reason why Bishops could not have taken on the Winelands giants. How do you keep your team and yourself motivated during such challenges?

Yeah really tough on the chaps and everybody involved, but again I want to emphasize, not only us. There is a bigger picture, lives at risk, people losing jobs. Schoolboy rugby is great but at the bottom of the list. The chaps know that but they also know hen we cross the chalk or are in the weights room we are there to work and how precious that Platinum blue jersey is. If anything the no rugby and limited games has increased the hunger for the boys and they want to play even more because as the cliche goes “You never know when it will be your last game” and they live that now. It also helps when they are seeing their mates like Sacha playing for the WP senior team and they are saying to themselves I can be there as well. So really little motivation needed from me.

You were one of the few players to reach 100 caps for Ikeys, you seem to have a storied history there. Describe your playing career and what makes playing for UCT so special?

Great club just like False Bay, I was fortunate to have been abled the opportunity to play for two of the best clubs in the country. There are not enough words in the English language to describe how I feel about UCT. Played rugby with my best mates, won plenty of trophies, met special people and most of all became a better person, well at least I like to think so. The green mile has a rich history and to be a part of that is humbling, I used to go up there as a schoolboy and watch the greats play like Kevin Foote, Vakai Hove, Ash Wells , Bodo Sieber to name a few and when the opportunity came to further my education and play it was a no brainer. I was just in the right place at the right time, when John Dobson took over and the rest is history.

You were a Rondebosch old boy but did a post matric at Bishops, and now you are a coach there. This is almost like moving from Real Madrid to Barcelona – what made you make the move and how has the Bosch community taken the move?

I love Real Madrid and Barcelona funny enough, yeah I was very fortunate to attend both, I was actually just about to head to Kingswood for my A levels when I decided that Bishops was a better fit for me. Again, the right place at the right time, coached by Andre Jacobs we had a marvelous team and I had so much fun playing and getting this holistic view while completing my A levels. Great people at Bishops! I grew up sitting on my rugby ball on the mini meadow fields at Bosch and it definitely played a key role in who I am. I don’t really focus on what other people think about my decisions, the move was a positive decision and one I needed.

Who is the best player you have played with?

Toughest question, I have played with so many such as Nic Groom, Marcel Brache, Don Armand, Damien De Allende again to name a few! The best player I have ever played with would have to be Adrian Kritzinger, I played rugby at school with him and at Varsity and he is a genius. His rugby days were cut short but honestly one of the most naturally gifted footballers I have come across, ability to use his feet, strength and could throw a pill, great leader and friend.

What is your earliest rugby memory and who inspired you growing up?

Earliest memory would be Dad taking me to watch rugby at Newlands, I was more interested in the snacks, but allowing me the opportunity to see legends like Joel Stransky and Breyton Paulse play I will never forget. Dad did and still does believe I am the best rugby player he has ever seen, he also now believes I will coach the Boks. Love like that and belief is the most inspiring thing any young man can get and I hope I can do the same for my son and daughter.

How did you make the transition into coaching? Was it something you always planned or did you fall into it?

I was really lucky former Leinster prop Stephen Knoop was leaving Bishops and asked If I would be keen to fill his role, I jumped straight in and loved every minute, I was lucky to have guys around me like Andre Jacobs and Dave Mallet who could nurture my coaching while I was still playing and being able to bring fresh ideas.

What is the 2022 season looking like? What are your aims and goals for the season? Can we expect a Bishops team similar to 2020/21?

It’s looking tough with 22 rugby matches but exciting. Again our goals as a team are to get better, work as hard as possible during the week so that the score can take care of itself on a Saturday. We don’t want to compare ourselves to any team, we want to write our own story for 2022, not much will change, we are going to run it, its going to thrill and with some new stuff in between, either way we are going to have fun.

Players such as Connor Evans, Sacha Mngomezulu, Imad Khan, Suleiman Hartzenberg and Bruce Sherwood are clearly future stars. Are there any dark horses you have coached over the years who you think can go on to achieve big things in the game?

Great names all of those, great kids most importantly. Definitely a guy like Keagan Blackenberg will go on no doubt, William Rose and Liam Kloosman too, they are just too special not to be pro’s. Then a name to keep an eye out for Chris Pittaway  a modern day prop who is going to turn heads. I think Johnny Roche and Bruce Campbell are two guys that are going to also be stand out at Provincial and VC level so its super exciting.

What is your philosophy?

Left foot then right foot, both will follow. No, it simple, in life you reap what you sow, put in the hard yards be consistent and the results will come for you personally, then in terms of the team, be good teammates, be on time, clean up, take care of your job specifically and the rest will flow. It’s the small detail that counts and that needs to be looked at, that detail will define whether you are a cow or a purple cow. People stop to see purple cows.

Any coaches you look up to?
Plenty not necessarily rugby coaches , Jill Ellis, ,Mike Staley from football and NFL. Then in rugby its no secret that I think John Dobson is an outstanding coach miles head of the game to be honest. I also think the way in which Bafana Nhleko approaches the game and his process is outstanding and one which I am learning from.

What are your long term aspirations as a coach?

Like every coach I want to go to Everest and that would be to coach the Boks or a URC Franchise, but that being said I am just focused on helping Bishops right now and making sure that the school program runs the way it should and the boys have the best opportunities to express themselves.