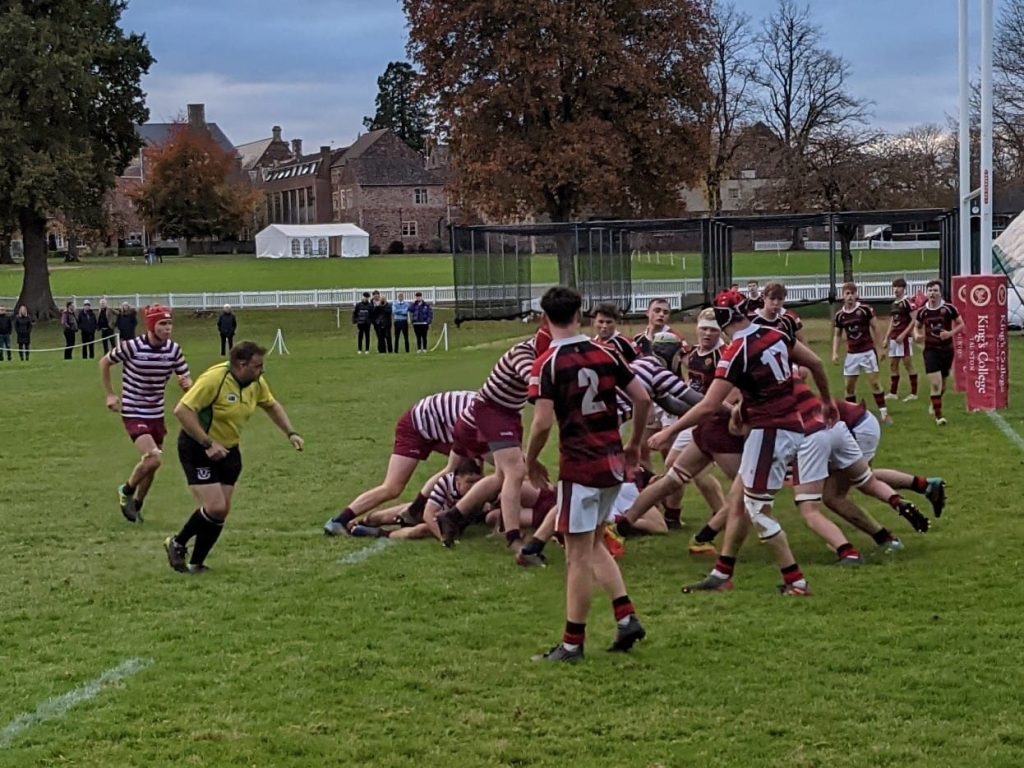 King’s College Taunton and Exeter School shared eight tries in a game where the lead changed hands several times, but successful conversions gave the home side a 26-22 advantage.

King’s play on a tough circuit and have lost this term to some of the stronger sides in the South-West, including Clifton, Sherborne and Vase Regional finalists Bristol GS. Although Chiefs draw primarily from AASE side Exeter College, Exeter School have a few players in the Premiership club’s  academy,  Their match-up promised to be a close one based on recent seasons’ encounters. Dry, mild conditions with a light breeze and a firm playing surface looked to be conducive to some open rugby.

After Exeter had kicked off, the home side had the better of the opening exchanges, forcing a turnover and moving the ball through the hands on the right to release wing Alex Kern and win an attacking scrum inside the 22. Possession was won and the ball moved through the hands into midfield, but a forward pass gave the ball back to Exeter, but they were unable to clear and a second attacking scrum gave King’s a scoring opportunity. Fly half Charles Sharland made ground towards the line and after he was stopped play was switched to the left, creating an overlap for left wing William Hopkins but the final pass went astray, and Exeter were at last able to clear.

The visitors established better field possession after King’s were penalised in midfield at the breakdown, winning a line-out and setting up an impressive driving maul which was to prove to be their main attacking weapon. When play was switched to the backs a grubber kick was charged down and King’s were able to clear briefly, but another penalty gave Exeter an attacking line-out and a driving maul took play up to the 22. Although possession was briefly lost, the Exeter fly half out up a well weighted kick to the right corner which was seized by the Exeter full-back who grounded the ball to open the scoring, although he was unsuccessful with his touchline conversion attempt.

The restart was not cleanly fielded by Exeter, enabling Kern to hack the loose ball through close to the line. Although Exeter prevented the try, their clearance kick was charged down and recovered by King’s who moved the ball quickly to the left where outside centre Jacob Wakeling cut through to score. Sharland was on target with the difficult conversion to give his side the lead.

Although it was King’s turn to have problems at the restart, Exeter were unable to capitalise and after an exchange of kicks King’s won a penalty from which Sharland got a good distance on his kick to touch. With the line-out won, the first phase ball was moved through the hands to the left, before being recycled back to the right where an overlap was created for Kern who gathered the offload and sprinted clear to score on the right, Sharland again adding the extras.

Exeter again used the maul tactic at the line-out but the momentum continued with the home side, who looked to get the ball wide on the left with strong running by inside centre Joshua Thomas, but the interval was reached without further addition to the scoreboard.

The visitors began the second half with apparent determination to make good use of the strength of their forward pack, and successful use of the 50:22 law gave them an attacking line-out on the right. Driving through the forwards forced the King’s defence to concede a penalty which was kicked to the corner. The inevitable ensuing maul proved to be unstoppable, and it was the powerfully built Exeter second row who claimed the score. Although the difficult conversion attempt was unsuccessful a change in momentum was evident.

A penalty conceded at the restart by King’s gave Exeter another chance to use their strength up front, but the kick from hand failed to find touch and good handling by King’s saw them clear to midfield. However, another successful 50:22 kick gave Exeter an attacking line-out from which they forced another penalty, giving them the chance to drive their maul from the line-out in the left corner. This time it was well defended by King’s, who regained possession at a scrum, allowing Sharland to clear to touch.

The respite was brief, as Exeter drove back into the left corner and desperate defence resulted in a deliberate knock-on being penalised and the referee showing yellow. Exeter looked to make immediate use of the man advantage and again drove their maul over the line, but King’s were able to get bodies into position and were awarded a goal line drop-out. Exeter returned the kick and won a line-out in the right corner. With possession secured, the ball was recycled back to their hooker who crashed over on the right. Although the conversion attempt was again unsuccessful, Exeter were now in the lead.

The home side were quick to respond, winning turnover ball which was kicked deep into the 22 on the left, where excellent pursuit forced the Exeter defence to concede a scrum. The set piece ball was moved through the hands to the right, creating another overlap for Kern to score his second try, Sharland producing an excellent kick from the touchline to add the conversion. Although the restart went directly into touch, giving King’s good field position from the resulting scrum, Exeter ran powerfully out of defence with forwards and backs combining well on the left, and forced King’s to concede a penalty. After a long advantage had been played, that was kicked to touch and the ensuing maul was again taken down illegally, giving Exeter a series of lineouts and mauls in the corner, which resulted in their open side flanker claiming the try. The Exeter full back responded admirably to the pressure to land an excellent touchline conversion, restoring the visitors’ one-point lead with less than five minutes left.

With the restart safely fielded, Exeter recycled possession in the forwards, taking time off the clock but then, with their coaches calling for a kick downfield, chose to move the ball through the hands on the right, where their right wing was tackled. Excellent jackal work at the breakdown by King’s forced a crucial penalty, kicked to touch on the left, and from the line-out the ball was moved to the right before being switched back to the left, where No 8 Charlie Reehal carried strongly into the corner. Although he was stopped, possession was retained and after sustained pressure on the line replacement second row Oliver Wrelton forced his way over. Although the conversion attempt was missed, there was no time for a restart.

This was a closely contested game between two well-matched sides with contrasting styles, with the lead changing hands several times, and the finish could hardly have been more exciting. King’s now host neighbours Richard Huish and Taunton School before finishing their season with a visit to Blundells. Exeter also face a challenging fich to their season with a visit to Colston’s and home games against Wellington School, a rematch of their second round National Vase game, and Truro School, Bristol GS’ opponents in the Vase Regional Final.