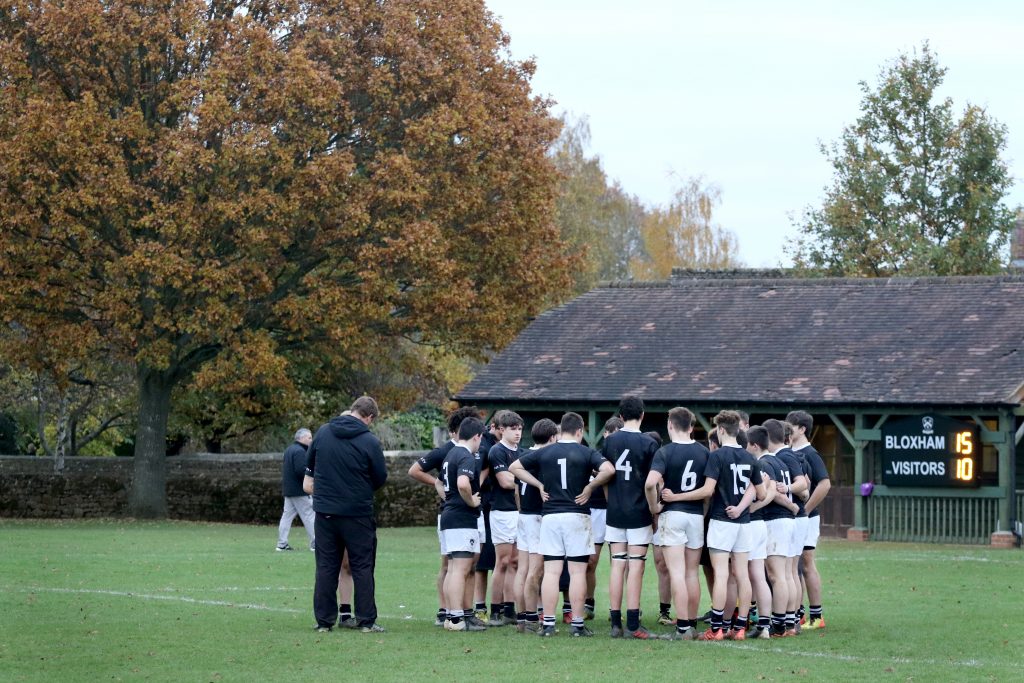 There were fewer games than in most weeks this weekend, but what schools rugby was on more than lived up to expectations with some absolutely thrilling games of schoolboy rugby.

Some huge head to heads were going on right across the country, with a number of games going right down to the wire in the most dramatic of circumstances.

Our Ten to Watch series featured perhaps the most dramatic of all of those and in arguably the biggest game of the day. 74% of our readers expected Millfield to continue their unbeaten season away at Whitgift, but few could have expected the drama that would unfold. With the clock in the red Millfield were 26-21 behind but a dramatic try levelled it, leaving England fly half Sam Harris with a touchline conversion to win the game. Like Marcus Smith at Twickenham, the young fly half showed no sign of any nerves and duly landed the penalty to win the game and set up an encounter next weekend with Clifton College, which will be live streamed here at NextGenXV, that will be an unbeaten head to head and potentially a key Daily Mail Trophy game.

Speaking of Marcus Smith, it was a glorious day for Brighton College, for whom not only was their precocious old boy slotting match winners for England, but their current crop produced some late heroics of their own. 17-15 ahead at Epsom College with 8 minutes remaining, in line with the expectations of 53% of our readers, they stamped on the accelerator to pull away to a comfortable looking 31-15 victory, despite the absence of two of their key players who were away on England duty.

One of the results of the day was surely RGS High Wycombe’s 32-7 victory at Bromsgrove. 70% of readers backed a Bromsgrove victory but RGS High Wycombe put in what was surely their performance of the season, backing up last weekend’s victory over St Edward’s. It was a stunning victory, one that jumps from the page and a fantastic effort from the school that produced the likes of Matt Dawson, Tom Rees, and Christian Wade.

Also in dominant form away from home were Tonbridge, although they were in line with the expectations of a whopping 75% of readers. They were once again superb as they travelled for their classic fixture against Dulwich College and sealed a thrilling 40-19 victory, a continuation of this wonderful season from the young men from Kent.

Few teams are having a season quite as impressive as Berkhamsted, though. The Hertfordshire side performed brilliantly in midweek on our live stream to reach the regional final in their section of the Schools Cup, and they backed that up on Saturday, as predicted by 81% of readers, with a fantastic 28-8 victory away at Stamford, a side that has had some absolutely outstanding performances this season.

So too have St Benedict’s, who moved up to third in the Daily Mail Trophy table with yet another fantastic performance as they beat St John’s Leatherhead 34-14. 85% of readers predicted the victory, but it was without question St Benedict’s biggest scalp of the season and they must now be looking at the rest of the season and thinking that their sky high position in the table could well remain when the fat lady sings.

Bloxham produced an extraordinary second half on Saturday, leading Dean Close by five points at the break they stepped on the accelerator hard in the second half as they stormed to an absolutely outstanding 41-15 victory, their second strong victory in a row and a victory that met the expectations of 73% of readers.

A similar number expected Denstone College to win up at St Peter’s York, 71%, but it was a tough outing for both as they gave each other a real test in a bit of a thriller. Both sides looked good but it was Denstone College that managed to back the expectations of the readers, sealing a 35-26 triumph away from home against a St Peter’s side that is looking strong.

The remaining two games from our Ten to Watch were real nail-biters. Warwick v Northampton School for Boys always felt as though it would be close but few could perhaps of imagined that it would have been quite as close as it was. Warwick winning a thrilling and incredibly dramatic game 22-20, proving 69% of readers right but more importantly producing an epic contest between two fantastic school sies.

Finally to Lancaster RGS v RGS Newcastle were 57% of readers expected an RGS victory but in a brilliantly close encounter it was the in-form LRGS that sealed the 16-13 victory, backing up that barnstorming performance at Giggleswick the week before and confirmed the notion that this Lancaster RGS side is a very strong outfit indeed.

Friday night saw Barnard Castle on absolute fire in their clash with Dame Allan’s sealing a stunning 61-17 victory. Meanwhile Norwich School were in similar form at Wymondham RFC as they put in an exceptional performance for a 57-5 victory over Langley.

Elsewhere Bablake & King Henry VIII reminded everyone of how good they have been this season with a 20-12 victory over Solihull, while The Crypt were again superb for a 29-11 victory over Pate’s Grammar. Over in the East Bedford Modern won a really close encounter at Bedford Athletic against Richard Hale, 19-15.

Saturday saw some fantastic action, and in the North East there was some silverware on offer in the form of the Tom Burrows Cup at Silcoates. Rishworth claimed the title, heading a field that included Austin Friars, Newcastle School for Boys, Yarm, and of course the hosts, Silcoates.

Over in the North West Kirkham Grammar were again in absolutely breath-taking form as they took on Leicester Grammar and kept hold of their unbeaten record with a magnificent 68-3 victory. Elsewhere Manchester Grammar were highly impressive away at Cheadle Hulme as they claimed a 31-18 victory, while Sandbach were on song at home against St Anselm’s, 24-18.

Sotnyhurst College won a really tight one with King’s Macclesfield, 10-5, but things were even closes at St Ambrose College were they just held off the challenge of Merchant Taylors’ for a 22-21 victory.

Over in Yorkshire Grammar School at Leeds put in a storming shift to beat Stockport Grammar 43-12, while Bradford Grammar and Ashville College could not be separated. Further South Nottingham High showed their recent form with a 27-12 victory over KES Birmingham, while Princethorpe College won a tight one at home to Loughborough Grammar, 17-14.

King’s Worcester kept their Modus Cup form going thanks to another strong victory, winning 26-12 at Bishop Vesey’s, meanwhile RGS Worcester were straight back on the horse with a 17-12 victory over KES Stratford. Moving further East Magdalen College beat South Coast opposition in the form of KES Southampton, 38-21, while Pangbourne College hosted Lord Wandsworth College in an absolute thriller as they just pipped the visitors, 22-21.

Further into the South East there were some exceptional performances, and once again Trinity were one of the star performers of the weekend with a quite brilliant 34-0 victory at Hurstpierpoint College. However the big story of the day was surely KCS Wimbledon bounding back to that early season wow-factor performance level with an utterly sensational 78-0 victory at Tiffin. Emanuel were just as impressive, they took on Latymer Upper and put in a ludicrously strong performance for a 73-0 victory.

They were far from the only sides in high scoring form though, Caterham were brilliant at home to Colfe’s, winning 50-7, while St George’s Harpenden travelled to UCS and secured a fantastic 59-5 triumph. Fresh from their thrilling win last Friday at Merchant Taylors’, Reading Blue Coat travelled down to St George’s Weybridge at were astonishingly good, winning 45-0 ahead of their Vase game against Bryanston in midweek.

Merchant Taylors’ meanwhile bounced back from that last-gasp defeat last time out with a brilliant 36-5 home victory over Aylesbury Grammar School, a side who have been brilliant all season. Sutton Valence, another who have been superbly good all year, had an almost identical result as they travelled to Sevenoaks and claimed a 36-3 victory.

Seaford College were on song after their tough game against Berkhamsted in midweek, putting in a strong display to beat Canford 19-6. Meanwhile Campion won 23-0 at Dartford Grammar and King’s Canterbury travelled to Reigate Grammar and came away with a 21-12 victory. One of the most impressive of all was a dominant 41-10 victory for The Judd at home against Langley Park.

RGS Guildford pulled off arguably their result of the season with an absolutely fantastic victory in a really tight game at St Paul’s, 20-18. That was the same score as at Churcher’s College, who beat Halliford, who continue to punch well ahead of their weight. St Dunstan’s also won a close one, 17-14 at Cedars, while QES Barnet won 31-20 at St Ignatius College and Wellington College’s 2nd XV defeated London Oratory 26-7.

Over in the South West Blundell’s were in sparkling form in a 41-10 defeat of Bristol Grammar. Meanwhile Clifton High won a spectacular game at St Edward’s Cheltenham, 55-26. Things were similar at Mount Kelly, too, where they defeated Queen’s College Taunton 44-20. Queen’s College’s local rivals, King’s College, meanwhile won with a good performance at home against Richard Huish, 32-12 .

Wycliffe College enjoyed a competitive victory at Downside, 19-12, while Wellington School also scored 19, defeating Exeter School 19-5 away from home. Colston’s were on song away from home too, 26-7 at Prior Park College, while KES Bath also claimed victory on the road, defeating Kingswood 13-10. QEHmeanwhile defeated Beechen Cliff’s 2nd XV 32-12 at home and over in Wales Cathedral School Llandaff and Christ College Brecon drew 5-5.

In Scotland Hutchesons’ Grammar extended their unbeaten season to 10 games with a stunning 40-0 victory at home to Glasgow High School. Strathallan were also in spectacular form with an utterly brilliant 64-6 victory at home against Edinburgh Academy. St Aloysius’ College also enjoyed a superb victory on Saturday as they saw off Glasgow Academy 49-7. Morrison’s Academy continue their strong form with a 34-12 defeat of Robert Gordon’s College, while George Heriot’s defeated Stewart’s Melville’s 2nd XV 21-15 away from home.