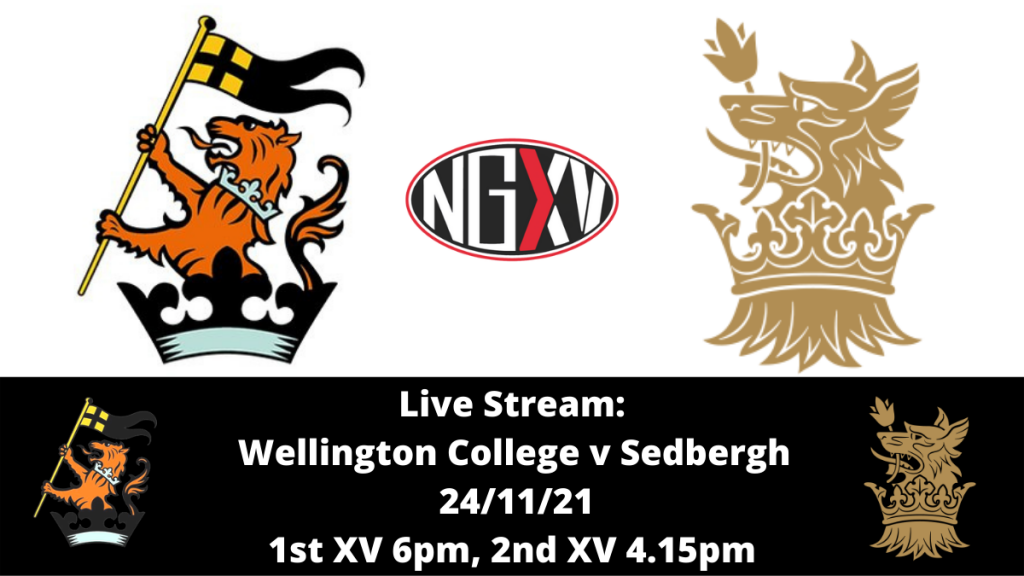 It pits two of the greatest rugby schools ever against one another, two sides that are recognised the world over and that play a brand of rugby that seems to bring both joy and drama to every contest.

You will be able to watch the live stream on our YouTube channel and embedded below here in the website, with the 1st XV kicking off at 6pm. We will also be live streaming the 2nd XV game beforehand, which kicks off at 4.15pm.

Looking ahead to that huge 1st XV fixture, it is going to be a massive encounter, two of the finest sides in the land going head to head in a fixture that has been within one score in four of the last six fixtures. Who could forget the last minute heroics of the likes of Tom Curtis and Johnny McNicholl in past years to earn dramatic late victories for Sedbergh.

Those dramatic late victories have given the fixture a bit of a tilt towards Sedbergh in recent times, you actually have to go all the way back to 2013 for Wellington College’s last victory, a tight 14-10 affair. Though with cancellations due to Covid in 2020 and Mumps in 2016 that’s only six games ago.

Time and time again this game has proved crucial in the Daily Mail Trophy race, indeed these two have utterly dominated the competition since its inception in 2013. Wellington College won three in a row from 2014 to 2016 before Sedbergh went back to back in 2017 and 2018 thanks in no small part to those victories over Wellington at Broadstreet, before in 2019 Cranleigh claimed the title in no small part due to Wellington’s defeat at the hands of Sedbergh at Broadstreet that year, their only defeat in 2019.

This year it might well be defining again, defeats to Clifton College last time out and Millfield before half term have probably cost Wellington the opportunity for the title, though never say never, but they can still have a huge impact on the competition with victory on Wednesday evening, Sedbergh are currently top of the standings but any defeat will shake that up enormously.

Indeed Sedbergh are undefeated, winning seven from seven despite a covid interrupted start to the season. This however is going to be by far and away their biggest test. Wellington College might have missed out against Millfield and Clifton, in dramatic circumstances in both it should be added, but Sedbergh have faced nothing like that level of competition yet this season.

Indeed Wellington College have faced that level of competition consistently, having also competed in the St Joseph’s Festival, finishing third in a hotly contested Festival that was won by Millfield.

Sedbergh’s biggest test was expected to be Whitgift but a storming performance put the Croydon men to the sword, finishing 52-13 to Sedbergh. Interestingly though that is the only common opponent that these two have, Wellington beating them 24-12.

The contrasting manner in which each defeated Whitgift, added to Sedbergh’s victories in the past four editions of this fixture perhaps suggests a slight advantage to the Cumbrians, however past results tell us little of this fixture, those players are long gone, better to look at what the current players did as youngsters.

There Wellington can smile, as U14s their U6th defeated Sedbergh 40-0. Sedbergh bounced back and U15s and U16s with narrow wins, something shared with the current L6th, whose U15 game in 2019 ended 29-26 in Sedbergh’s favour.

It all suggests another down-to-the-wire classic at Broadstreet RFC, two of the most prestigious names in all of schoolboy rugby kicking off a huge week of Live Streams here at NextGenXV, which will also see us take in Reading Blue Coat v Bryanston on Thursday, Hurstpierpoint College v Caterham on Friday, and Millfield v Clifton College on Saturday.

There is also the matter of the 2nd XV game at 4.15pm on Wednesday, which again has all signs pointing towards an epic close encounter. Each has identical records having Won 6 and Lost 1 each, and in 2019 the 2nd XV game ended in a 19-19 draw.

It all looks set to be another drama filled, tension ridden, epic between Wellington College and Sedbergh on Wednesday evening.